Finally – An Objective Measure of Fatigue? An ME/CFS and Fibromyalgia Inquiry

Fatigue is like the Rodney Dangerfield of symptoms – it just gets no respect. The problem is the poor descriptive power of the word. It readily describes the everyday, manageable fatigue that most of the population regularly feels. That fatigue, though, has little relation to the pathological, functionally debilitating “fatigue” that people with chronic fatigue syndrome (ME/CFS), fibromyalgia (FM), multiple sclerosis and some other diseases experience.

Studies indicate that the “fatigue” in these can be remarkably debilitating. Tony Komaroff’s large 1996 study indicated that people with ME/CFS were significantly more functionally impaired than people with congestive heart failure, type II diabetes mellitus, acute myocardial infarction, multiple sclerosis and hypertension. (Note that very severely ill ME/CFS patients were surely not included in this study.)

Self-tests and questionnaires to assess fatigue abound but are hardly trusted. What we really need is a test that objectively measures how much fatigue is present. Finding that has seemed kind of like the holy grail – a much desired goal but always seemingly out of reach. How do you measure such a seemingly subjective issue as fatigue?

One way is to identify a physiological attribute that changes depending on how much fatigue is present. The Japanese propose that a parasympathetic nervous system “collapse” that occurs after exertion in ME/CFS patients allows them to measure the amount of post-exertional malaise present.

Staci Stevens’s two-day exercise test certainly shows up the functional impairments caused by exercise in ME/CFS in spades but is expensive, takes two days to complete, and requires exercise. The two-day test is superb for proving disability and understanding the amount of activity an ME/CFS/FM patient’s system can handle. An ideal measure of fatigue that could be readily used in studies, though, would be non-invasive, cheap and easy to administer.

A cheap, easy-to-tadminister, non-invasive test which could be conducted using a wearable, no less, has actually been the focus of research lately.

The ramifications could be huge. Researchers could objectively determine if say, NK cell cytotoxicity or ATP output was actually correlated with increased fatigue. Or a clinical trial could determine more accurately how a drug or treatment protocol was affecting fatigue levels. Functional vs “non-functional” fatigue (depression?) could be identified.

The eyes are turning out to provide a surprisingly effective window into fibromyalgia and chronic fatigue syndrome (ME/CFS).  Non-invasive methods have been used to detect small fiber neuropathy in the eyes of fibromyalgia patients.  Recently, researchers have been using computational eyeglasses to assess the association between fatigue and rapid eye movements called ‘saccades’.

Saccades refer to a quick, simultaneous movement of both eyes which occurs in a kind of jumping motion. These types of movements occur when our eyes scan their immediate environment or when we’re reading. (Could reduced eye movements be involved with the reading problems some ME/CFS/FM patients have?)

These movements occur very, very quickly but their speed, amplitude (distance traveled) and other factors can be measured. 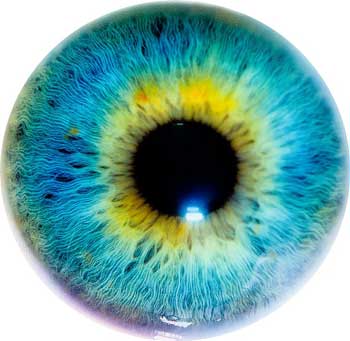 The eye could be a window into the fatigue experienced in ME/CFS and FM.

The link between a decrease in rapid eye movements and fatigue was first seen in 1979. Since then, studies of healthy controls have consistently shown that reduced rapid eye movements are associated with fatigue and/or sleepiness.  A 2012 and 2017 study found that people with multiple sclerosis – a severely fatiguing disorder – displayed significantly reduced eye movement velocity, amplitude and latency during a fatiguing task, relative to healthy controls. The authors of the 2012 study concluded that:

Assessment of peak velocity, amplitude and latency in a saccade fatigue task is a promising approach for quantifying fatigue in MS patients.

The studies suggest that measuring rapid eye movements or saccades could provide a measure of fatigue-limited functionality; i.e. the inability of the eyes to scan their surroundings properly.

On a side note, studies have shown that, at least in healthy humans, caffeine, when taken after exercise, can reduce or prevent the reduction in rapid eye movements seen. This suggests that the normal fatigue associated with exercise is at least partially caused by what’s called “central fatigue” – or fatigue produced by the brain.

The idea of central fatigue actually has quite a history in ME/CFS. Years ago, Chaudhuri and Behan postulated that the fatigue occurring in chronic fatigue syndrome (ME/CFS) is “central” in nature. Their assertion was based on a number of findings (reduced motor performance, delayed central motor conduction, depressed cortical excitability, reduced ability to recruit muscles during exercise, reduced motor cortex activity), indicating that the inability of the brain to initiate motor activity was likely playing a major role in the fatigue found in ME/CFS.

In one remarkable finding, a researcher noted that the reduced muscle activation seen in CFS patients was similar to that seen in some stroke victims and ALS patients (!) (Schillings et. al. 2004).

Despite all the interesting findings, my recollection is that interest in motor cortex activation and reduced muscle recruitment in ME/CFS mostly died.

The interest in another part of Chaudhuri’s hypothesis has not, however. Behan and Chaudhuri suggested that problems relaying information from the basal ganglia to the motor cortices plays a key role in the fatigue in ME/CFS. Later studies by Miller have confirmed the basal ganglia problems in ME/CFS.

The basal ganglia connection is intriguing given recent studies which suggest that caffeine is able to reduce fatigue in part by increasing levels of norepinephrine and dopamine. Dopamine, it should be noted, is largely produced by the basal ganglia which Chaudhuri/Behan and Miller postulate is heavily involved in ME/CFS.

In conclusion, the eye studies suggest that similar brain issues to those studies may be occurring in ME/CFS and are responsible for the exertion-induced reduction in the saccades (rapid eye motions) found.

Back to the Eyes

The reduced eye movements seen after mental or physical exercise could, then, be due to problems in the brain.

“Often we ask breast cancer survivors to rate how fatigued they are feeling on a scale from 1 to 10. While this type of self-rating is critically important, it sometimes misses the functional aspect of the fatigue. The fact that someone not only feels fatigued – and what that might mean to them – but that the fatigue they are experiencing is having a measurable impact on their body.”

She described the wearable in the study (the computational eyeglasses) as being “low-cost”.

Could this upcoming study signal that the era of subjective questionnaires for fatigue is drawing to an end? Let’s hope so.