Understanding Your High - The Effects Of Marijuana On Consciousness

A very detailed, pre-prohibition, scientific look at the effects of cannabis on consciousness. The article is too long for upload, so provided the first section of the article and headings from following sections. Follow link for full article.

Understanding Your High - The Effects Of Marijuana On Consciousness
A marijuana high usually lasts two or three hours, during which a wide range of effects may occur, varying both in intensity and quality. The usual, most noticeable effect is intensification of sensation and increased clarity of perception. Visually, COLOURS are brighter, scenes have more depth, patterns are more evident, and figure-ground relations both more distinct and more easily reversible. Other sense modalities do not have the variety of visual stimuli, but all seem to be intensified. Sounds become more distinct, with the user aware of sounds he otherwise might not have noticed. Music, recorded and live, is heard with increased fidelity and dimension, as though there were less distance between the source and the listener. Taste and smell are also enhanced under marijuana. The spice rack is a treasure of sensation, and food develops a rich variety of tastes.

Skin receptors are also effected. Heat, cold, and pressure receptors become more sensitive. Pain produces paradoxical effects. If attention is not on the area of pain, there is a reduced sensitivity to the hurt. But awareness of pain from a lesion, such as a burn or cut, will often persist for a longer period than usual, even allowing for the changed perception of time under marijuana.

Awareness of proprioceptive responses is enhanced. The person using marijuana may become aware of usually automatic, non-conscious, muscle tensions, small movements, feedback and control processes, and feelings of physical comfort and discomfort. These can be perceived with great clarity and distinctness.

Such effects vary with the individual and the situation. Sometimes one modality will predominate; sometimes a sequence of effects will occur; sometimes nothing will seem to happen. The direction or modality of effect can be often manipulated by the individual if he deliberately exposes himself to the stimulus, such as music, or paintings. However, such setting may not affect the perception if the person is not otherwise ready to respond in that way. Effects more often call attention to themselves; the user observes what he is experiencing in the situation and realizes it is not how he usually experiences the stimuli. On the other hand, some sense modalities may function in a straight pedestrian manner, neither being enhanced nor diminished.

The person himself is the most important determinant of how the enhancement will appear. Some persons orient primarily to visual stimuli and visual thinking, others to sound, others to tactile impressions. Visual orientation seems to predominate among persons in our culture; audile and tactile thinking is less common. It seems likely that sensory enhancement of a marijuana high would be most noticed in the predominate sense modality of the user; it certainly should have a differential response in relation to less used ways of perceiving.

Another factor which affects the response is that persons unfamiliar with the marijuana state frequently must "learn" that they are perceiving experience in a different way. That is, someone makes them aware of changed perception by showing them objects, playing music, and calling their attention to the difference in sights and sounds. Then they become consciously aware of the perceptual changes. This initiation procedure has led sociologist H. S. Becker (Becker, I963; partially reproduced in Solomon, I966) to suggest that most of the effects of marijuana are learned, not spontaneous. He says (accurately, I am sure) that the user must learn to notice the effects, categorize them, and connect them to the total experience of using the drug. What is learned in most cases is not a new way of perceiving, but the awareness of a change in perception. Few persons observe what they are doing in the sense of observing their seeing, and it is not surprising that many should have to learn how to become aware of themselves experiencing by checking current perception against memory and expectations.

The user's internal psychological needs will also influence his response. A fear of being overwhelmed by too much input will often reduce any changes to only those which the user can cope with or to changes only in certain modes. A fear of losing control over the perception of experience may suppress most of the effects and even shut down responses to below normal. On the other hand, emotional involvement with some part of the environment may enhance its perception. Internal physical needs also affect the response, e.g., hunger may be intensified so the person finds himself ravenous on getting high.

For a person using marijuana for the first few times sensory changes occur sequentially, rather than all at once. First he may notice increased brightness and clarity of colors, then sounds, then visual structures, such as paintings or designs. (Two dimensional photographs and motion pictures may be seen in three dimensions in the marijuana high, a perception which can be transferred to the normal state under certain conditions.) Then proprioceptive sensations may present themselves. Any order of the effects may occur during one high state or several. Often effects will develop to particular levels and then stabilize without further elaboration. I know some individuals who listen to music during a high, and this is their major use and apparently their only enhancement.

There are two states of awareness which relate to these sensory effects. The basic one can be called pure awareness. In this state the person is completely and vividly aware of his experience, but there are no processes of thinking, manipulating, or interpreting going on. The sensations fill the person's attention, which is passive but absorbed in what is occurring, which is usually experienced as intense and immediate. Pure awareness is experiencing without associations to what is there.

Test: THC in your system allows you to see shimmering and movement in this image. The higher you are, the more pronounced are the effects. 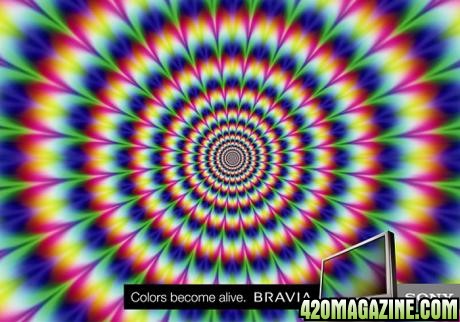 The other state of awareness is one which can be termed conscious awareness, in which the sensory experience is connected to meanings, plans, functions, decisions, and possible actions. This is our normal way of perceiving and how we usually go about our daily lives. We do not sense the world directly, but with the incorporation of our memories, meanings, and uses. In the state of pure awareness objects are experienced as sensory qualities, without the intrusion of interpretation. There are examples of this in normal life. The sensation of sexual orgasm may be (and hopefully is) experienced with pure awareness. Natural beauty, such as flowers, mountains, oceans, and sunsets, is sometimes experienced from a point of awareness without adding conscious thinking.

These two processes of awareness have been described by Charles Solley and Gardner Murphy (1960, Chapter 14) as non-reflective consciousness and reflective consciousness. Alan Watts compares the awareness state to a floodlight of attention, which shows a broad area and lights up anything that is there. Consciousness awareness he compares to a spotlight, which is focused and can be directed, though on a narrower area. This is a good analogy in pointing out that no deliberate directing is done in the awareness state, although it is sometimes the case that the area perceived in awareness may be a small one seen in great detail.

The awareness state can be called "choiceless" because choice is a part of consciousness functions. Decisions made outside of consciousness are not called "by choice" since choice implies conscious action. In a state of direct awareness there are no choices made and no decisions or actions occur. The stream of sensation flows and the person is aware of what is happening; if he acts he does so without consciously deciding to move. (That is, action is handled by some process other than the consciousness monitoring the awareness experience.) When complicated action becomes necessary conscious attention is activated and the sensation is used as stimuli, criteria, or information for the choices, plans, or action.

The awareness is not always experienced purely under marijuana, but often is mixed with some, though reduced, conscious attention. Consciousness, conscious awareness, or conscious attention involves a connecting function which observes experience in relation to past experience, memory images, memory recording, expectancies, plans, goals, etc. This type of consciousness may intrude on the awareness state at a low level. However, when awareness fills the attention there is a "becoming lost" in the experience, in which there is often not even a memory of what occurred. This seems to be a state in which consciousness functions are not present, and all experience is at the level of awareness. Consciousness, attention, and memory recording are apparently not active. (It is possible that attention was present and either was not remembered or the memory is not accessible to consciousness.) Such a state of pure awareness is at one end of a continuum of varying degrees of conscious activity, with the other end at a state in which the contents of awareness are used for decisions, plans, inferences, etc., and are not experienced for their primary sensory qualities; they are information rather than experiences.

Intensity of sensory experience seems related to the total proportion or amount of attention which is involved in the process. If attention is used in conscious or unconscious processes in making decisions, remembering, evaluating, etc., then this much is removed from the awareness of the sense experience. Thus it may be that one of the causes of sensory enhancement under marijuana is that attention energy moves from consciousness processes into awareness processes, which amplifies the experience.