So if there's nothing wrong with your immune system then why do you keep getting shingles, especially at your age? Where is his logical thinking? Something is clearly wrong. You're not making up shingles rashes. They need explaining. If he didn't find the reason with the testing he did, then he needs to dig deeper. Sounds like a lazy, self-centered jerk unwilling to work very hard.

Can you keep after your GP? Make him put these repeated shingles outbreaks in your record, make him acknowledge the frequent outbreaks. After a few in your record, demand an explanation for repeated shingles episodes. That's not unreasonable. Frequent shingles outbreaks is definitely not normal. He has to do something if he's anything resembling a decent doctor, even if it's only referring you to a different immunologist or an infectious disease doc. To see clear signs of illness and refuse to treat or refer approaches some kind of malpractice.

One thing they can do is document the frequent shingles episodes. This could be helpful in the future. I quit going to the doctor for frequently occuring URIs because the docs weren't doing anything. Later, when I was trying to get IVIG they claimed I didn't have frequent URIs, so obviously my immune system was functioning adequately. They weren't going to take my word for it. If the URIs had been in my medical record, it would have been easier to get immune treatments later.

Besides that, you might get a better GP/immunologist later, one with brain cells. You want all the singles info in your medical record so they can draw some reasonable conclusions.
Click to expand...

Nk function testing isnt recognized by medicine here but i think its the reason. Other online medical sites mention low nk function disorder which is numbers but also state low nk function as a functional immune deficiency, and this leaves people prone to infections. Avs are used to prevent vzv or hhv1 or 2 and abx kept on hand for bacterial infections.

So at this stage i can say i have an nk functional deficiency or mollarets meningitis which is a chronic form of hhv1/2 or vzv. Theres no recognised treatments other than avs and abx for these conditions. It seems hard to find someone who is willing to diagnose these.

Sounds just like you! Now that you have a diagnosis you'll be cured!

"Active infections must be identified and treated aggressively"

This is a cut and paste of someone replying to a post on reoccurring shingles. Holy crap. Im thinking im cured of cfsme and just have chronic reoccurring shingles with fatigue headaches insomnia bla bla. Woohoo. There were quite a few posts similar. 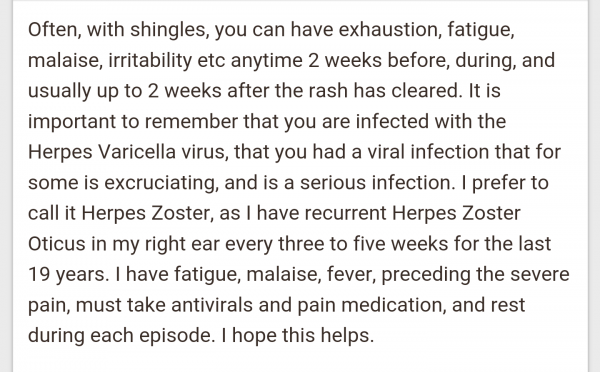 ???????
I will probably do as the immunologist said and keep doing what im doing i guess. Or wait for brindofovir to become available is another option. Its all a guess. Maybe rat poo will be a cure

Good news, @Strike me lucky! You're at least unlikely to get brain cancer...silver linings??

Remy said:
Good news, @Strike me lucky! You're at least unlikely to get brain cancer...silver linings??