It was the day before yesterday at Ron Davis's Palo Alto House. One Nobel Laureate (Peter Berg) was there. At least one venture capitalist who's daughter - a Stanford Mechanical Engineer and Ski Racer (formerly an ME and Ski Racer) has severe ME/CFS was there. (She is now active a couple of hours one day a week). The former Mayor of Palo Alto was there. Mark Davis was there. A reporter from the Washington Post (who I had dinner with - and I cannot remember her name right now - but who has two friends with ME/CFS and is firmly in our corner was there). The Canary in the Coal Mine crew was there. Dr. Peterson was there! That was a surprise. (Neither Dr. Montoya or Dr. Kogelnik was there.)

It was in the Davis's yard. It was very professionally done. Enough people came that it was standing room only. (unfortunately I was one of the ones standing. (lol)) Janet Dafoe gave a wrenching personal account, Linda Tannebaum - gave a very direct and forceful in her call for funding, the former mayor, Whitney's sister talked about Whitney before and after and Ron Davis was just very convincing.

They featured large photo's from Whitney healthy and not healthy. The juxtaposition between the two was heartbreaking. He was such a vibrant guy. This moving picture is the last time he was able to be hugged. He can not longer tolerate that...he is sooooo alone.... 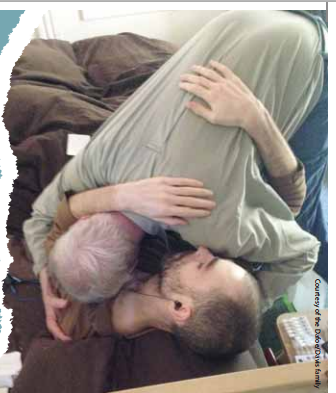 [/fright]
Ron said they had enough to get started on the basics of the severely ill project but not much more than that. Ron has had a grant application rejected twice from the NIH....(blog coming on that). There was one big downer. I hustled over to Mark Davis and asked when he's going to publish on ME/CFS. I had thought he was doing this huge 600 person immune study.....but he's not. He's not doing anything on ME/CFS. He can run some samples and get some ideas but he's not doing any large studies. He has no money to do it. I was flabbergasted....

He did say when Ron Davis asks you to do something you do it and Peter Berg - the Nobel Laureate - said if anyone can figure this out Ron can...

He does need some money, though.

More on the event later.

I am looking forward to hearing more.