If you live in the U.S. you might like to know that U.S. consumers generally pay two to six times more for the same drug that consumers in other countries do. CNN, for instance, found that a prescription for Cymbalta that cost $194 in the United States cost $46 in England and $52 in the Netherlands. Who Me? in the Forums recently found Rifaximin to be ten times cheaper in Canada. 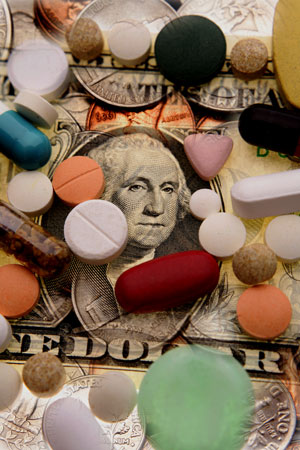 [/fright]Because most drugs are produced in one or two locations and then shipped around the world so long as you are buying from a reputable pharmacy, a drug you purchase from Canada or New Zealand is likely to be exactly the same drug you're buying in the U.S.

A 2011 federal survey, according to the Tampa Bay News found that about 5 million Americans buy drugs from foreign pharmacies. Many buy them from certified pharmacies in Canada but pharmacies in England, New Zealand, Australia, India and Singapore are used as well. In fact, many Americans have bought drugs from Canada that U.S. drug makers reduced the sales of some drugs to Canadian pharmacies.

This is despite the fact that importing drugs from other countries is illegal. The Obama administration and the Bush administration before them have chosen, however, to look the other way.

Why are some drugs in Canada and other countries so much cheaper? Because the Canada and other countries imposes price restrictions on drugs and the US does not. As witnessed by the ability of Valeant to raise prices a hundredfold on some drugs, the marketplace rules in the U.S. Even Medicare is not allowed to negotiate with pharmaceutical companies. Only large retailers and institutions such as hospital networks have the clout in the U.S. to negotiate drug prices.

What do you need to buy a drug online? A valid U.S. prescription. But how to make sure that you're getting a good drug?

Many medical websites suggest that U.S. customers use only U.S. licensed websites that feature the NABP seal of approval. Nothing they say else is safe. Are they right?

The million opr more Americans that buy drugs from Canada every year might disagree. A look at online drug retailers suggests that you might be able to get some drugs cheaper elsewhere, but probably the best best for a first-time buyer looking for a combination of price and safety is Canada.

If you are buy from Canada make sure that your pharmacy is a certified Canadian International Pharmacy (CIPA). This nonprofit Canadian association verifies the legitimacy and safe practices of Canadian online pharmacies that sell to the U.S. It estimates its members provide drugs to about 1 million U.S. customers a year.

You can find a list of certified pharmacies here. CIPA also has a website verification program here. Simply plop the address of your website in the box. (Do not trust websites simply because they have a CIPA seal; some rogue websites have copied its seal.)

PharmacyChecker.com certifies online pharmacies that it says "meet critical safety standards". It guarantees that your order will be "reviewed by a licensed pharmacist and dispensed from a licensed pharmacy." Pharmacy Checker says it checks to ensure that that the pharmacies are licensed with the appropriate local pharmacy boards.

It also allows you see reviews of the 30 plus pharmacies it has certified, many of which are Canadian and/or Australian.

Instead of providing a list of certified online pharmacies LegitScript provides a rating for any online pharmacy. Since it was founded in 2007 its reported that its made quite a splash. Its findings caused GoDaddy to suspend the domains of rogue internet pharmacies, and Google to reduce rogue pharmaceutical drug sellers 600 fold. In 2010 LegitScript was awarded a multi-million dollar contract from US Food and Drug Administration to monitor Internet for illegal online pharmacies. Legitscript, in other words, seems to be quite legit and is affiliated with Amazon.com, Google, Facebook and Bing.

LegitScript is also in something of a war with it's main competitor - Pharmacy Checker. Legitscript reported that Pharmacy Checker certified several pharmacies (six sites are listed) which were indicted and convicted for selling counterfeit or substandard drugs.

Does this mean that Legitscript is the go-to website to find good online pharmacies?

Not necessarily. PharmacyChecker fought back in a blog titled "LegitScript – Not So Legit?" that suggested LegitScript may be a front for U.S. pharmaceutical companies. Pharmacy Checker noted that while it gets its funding from online pharmacies, LegitScript simply says it is funded by "market research reports".

Plus, on top of Legitscript's standards for certification requiring that a pharmacy must be in good standing, must not be under disciplinary actions, must only accept valid prescriptions etc., it has a standard that cuts international online pharmacies (legitimate or not) out.

All pharmacies that dispense drugs on behalf of the website must be domiciled in the jurisdiction to which the website offers to ship drugs, except where reciprocity exists, drug importation is expressly permitted as a matter of law, or other legal authority permits or does not require the pharmacy to be domiciled in the jurisdiction.
Click to expand...

That standard does not allow pharmacies to sell to another country unless drug importation from them is expressly allowed by law. Even though the FDA turns a blind eye to it, drug importation is not legal in the U.S.

It was no surprise, then, to find that LegitScript listed as "unapproved" nine of the 10 Canadian online pharmacies certified by CIPA I submitted to it. One (drugmartdirect.com) was listed as a rogue pharmacy. LegitScript did not state why the pharmacies were unapproved.

WebMD suggested that consumers buying online make sure the pharmacy website participates in the Verified Internet Pharmacy Practice Sites (VIPPS) seal program run by the U.S.-based National Association of Boards of Pharmacy. VIPPS, however, seems to have run afoul of the same problem that LegitScript does; it does not appear to allow international pharmacies to sell to the U.S.

VIPPS pharmacies must maintain and enforce policies and procedures that address conflicts of law issues that may arise between individual states or between state and federal laws and regulations.
Click to expand...

ZZ and others on the Forums report that NorthWestPharmacy.com is a good choice that provides a good selection of drugs. ZZ reports they will price match any other CIPA pharmacy.

Who Me? has dealt with online pharmacies across the world. When she deals with a new pharmacy she always calls to and emails before she orders and ask questions to see if someone answers

Where to go then if you want to get cheaper but still safe drugs online? Perhaps it would be best to start out in Canada using the CIPA, and then cross-check between CIPA, LegitScript and Pharmacy Checker.

What are your experiences using international online pharmacies? If you've had a good or bad experience please let us know.
Discuss this resource here