Desmopressin Does it For ME/CFS/POTS patient

Source of the Story
Other

Functionality at it's Worst
Mostly homebound

Treatments That Made A Big Difference
Desmopressin

Present State of Health
Fully recovered - no restrictions at all

Words of Advice
Dr. Bateman cautioned about the use of desmopressin:

I would like to add a strong note of caution to the use of desmopressin. This drug can effectively raise blood volume and constrict blood vessels, which can be helpful in managing orthostatic intolerance syndromes. But desmopressin must be monitored carefully by a skilled physician, with lab tests, because inappropriate or poor management can result in severe medical consequences, including life-threatening hyponatremia, fluid overload and hypertension.

In addition, while intriguing, Cort’s assessment of the connection to CRH may be overly optimistic. Vasopressin, also known as ADH and AVP, and marketed as the drug Desmopressin, is produced in the hypothalamus, but stored in and released from the posterior pituitary. CRH is also made in the hypothalamus and secreted in response to stress. CRH stimulates the release of ACTH from the anterior pituitary, which in turn leads to release of cortisol from the adrenal gland. It is true that vasopressin and CRH are released in tandem from the hypothalamus, but each goes on to play a different role in the stress response system.

It is my opinion that the main benefit of Desmopression is restoration of more normal circulatory perfusion (delivery of oxygenated blood to all tissues). I believe our first case had an immediate and complete recovery response because we happened to make an early diagnosis and intervene promptly to support the core pathology. In MECFS patients who have been ill longer, the impact of desmopression is much less predictable. While it may provide some benefit to those with orthostatic intolerance, the impact is definitely less dramatic. Most of all, it should be managed carefully to do no harm.

Most intriguing to me (and ties in to Cort’s hypothesis) is the the idea that if both vasopressin and CRH were underproduced, or the release inhibited or dysregulated, an illness that looks very much like MECFS might be the result.

From a 2016 IACFS/ME Conference Overview

A poster from the Bateman-Horne Center highlighted the complete recovery of a person with severe ME/CFS and POTS - something that doesn’t happen very often - using desmopressin - a drug that's not used all that much. Desmopressin is used to treat diabetes insipidus (DI) - a condition that some think may be more common than is currently believed in chronic fatigue syndrome.

Diabetes insipidus is characterized by excessive thirst and the production of large amounts of (dilute) urine. It's entirely different from and should not be confused with the diabetes we're all aware of. Two different kinds of diabetes insipidus occur; a neurological form that produces a deficiency of arginine vasopressin (AVP), also called antidiuretic hormone (AD), and kidney associated DI that occurs when the kidneys fail to respond to ADH.

Dr. Bateman started her on a trial of oral desmopressin (0.1-0.2 mg twice a day), put her on a pacing regimen and worked to manage her sleep, pain and anxiety. The patient responded immediately to the desmopressin. Within a year of starting it she was almost completely healthy. Over the next year she was able to taper off the drug and remained healthy. She has no symptoms of POTS or ME/CFS.

It's important to note that DI does not cause the kind of fatigue and post-exertional malaise associated with ME/CFS; i.e. while DI may have been present it was not the cause of the ME/CFS patient’s symptoms. Dr. Bateman was clued into the DI diagnosis by the patient’s high level of thirst and urination.[fright] 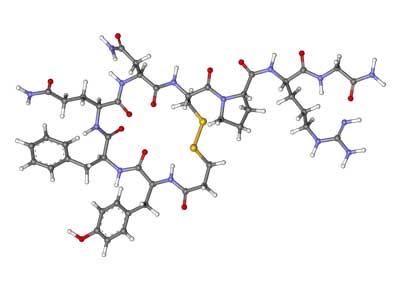 One of the earliest chronic fatigue syndrome studies - way back in 1991 - suggested that problems with a CRH deficiency or "some other central stimulus" was present in ME/CFS. A 2001 study also found evidence of reduced CRH secretion.

Dr. Bateman believes that catching this patient early may have been crucial, but suggested that long term use of desmopressin could be helpful for a subset of ME/CFS/POTS patients.