Fibromyalgia (FM), like chronic fatigue syndrome, has been plagued with diagnostic issues largely because no biological test has been validated for the disease. Diagnosing fibromyalgia requires ruling out other diseases that might be causing your symptoms and carefully assessing your symptoms. It can take several years to get a diagnosis.

The 1990 American College of Rheumatology criteria required chronic widespread pain (CWP) for >3months, and the presence of at least 11 out of 18 specified tender points.

2010 American Rheumatology Preliminary Diagnostic Criteria - By 2010 the tender point requirement - long criticized - was dropped in favor of requiring the presence of widespread pain and a symptom severity scale. The new criteria have been criticized for not requiring a physical exam but seem to have stuck. They've been modified several times.
Modified 2010 Criteria - The symptom severity scale was replaced with a three question survey.

2016 Criteria - the modified 2010 criteria were slightly revised in 2016 to prevent people with regional pain syndromes from being misclassified as having fibromyalgia.
At each modification the percentage of women relative to men with the disease has dropped significantly from 14:1 to 5:1 to 2:1.

To put it more simply. The Mayo Clinic states that in order to be diagnosed with FM you must experience

Fibromyalgia’s core characteristic is widespread pain that can occur in a variety of flavors. Some of the terms used to describe the kinds of pain encountered include burning, stabbing, throbbing, radiating and aching. The pain is often worse in the morning and can be severe enough to significantly limit a person’s ability to work and socialize.

When even the touch of a piece of cloth or similar substance registers as painful allodynia is present. Nerve associated pain such as numbness, tingling and burning is also commonly found.

A survey from the National Fibromyalgia Association found the following symptoms in FM. (Taken from the Fibrocenter). 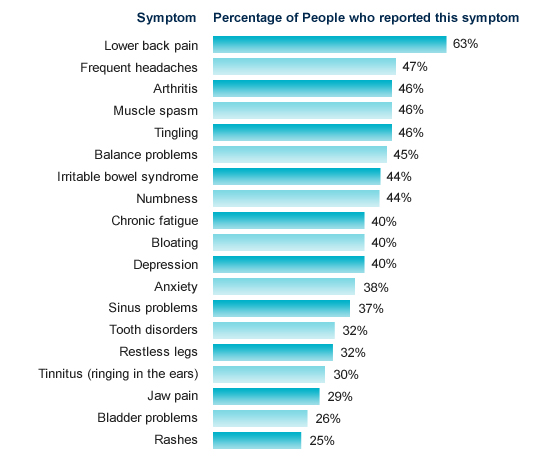 In Their Own Words

For a particularly vivid display of the rich assemblage of symptoms that can be experienced in fibromyalgia check out:

Because FM can cause so many symptoms it's not surprising to see it being misdiagnosed as another disease or vice versa. (Several are from Dr. Martinez-Lavin's book "When Stress Becomes Real")
Resources