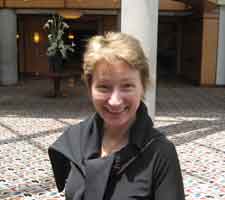 [/fright]Marian Lemle was the first to propose people with chronic fatigue syndrome were in a hypometabolic - hibernation-like state. She proposed that the state was probably protective and driven by hydrogen sulfide metabolism.

Use the download button on the upper right to get the paper.
Lemle's 2008 testimony to the CFSAC committee provides a good introduction to her hypothesis.

Good afternoon, Chairman Oleske, members of the CFSAC Committee, and concerned members of the CFS community. My daughter’s life, and by extension, our family’s world—were turned upside down four and half years ago when our beautiful daughter, who had been President of her graduating class with a very bright future ahead of her, came down with what was then an unspecified virus, and was later diagnosed with the absurdly named disease “Chronic Fatigue Syndrome.”

For ten years prior to her getting sick, I had on the table in the living room this little artist’s book called “The Blind Men and the Elephant”. In this well-known parable, one blind man touches the elephant’s side and is certain he is touching a wall. The second blind man grabs a tusk and is certain he is holding a spear. The third touches a squirming trunk, and thinks it is a snake, and on it goes…

I cherished this book because it so simply and elegantly illustrated how our conceptual framework, our view of a problem, can limit our ability to see the larger whole, particularly when combined with unwarranted certainty. It reminded me of the importance of thinking more broadly about a problem and maintaining an open mind, something that I, in turn, will ask of you here today, as I discuss a hypothesis I developed on CFS/ME.

I have been working in a very promising new area of research, akin to the discovery of nitric oxide in its importance, for which the Nobel Prize was awarded. Very few scientists or physicians are familiar with it. I should add that I am not looking for any research money, but instead, I am hoping to interest researchers in this idea. I could not have gotten to this point without the support of Dr. Carl Peck, a former Assistant Surgeon General, who, early on, felt that I had made a discovery and guided me through the process of writing the hypothesis, which was e-published ahead of print in September by the Journal of Medical Hypotheses.

Almost two years ago to the day, I attended a lecture by a scientist who was able to induce a state of suspended animation in mice using the gas hydrogen sulfide, or H2S. As I listened to him, I was struck by the similarities between what happened to the mice, i.e., a decrease in core body temperature, an apnea-like sleep state, reduced heart and respiration rates, and a severe metabolic drop, and what happens to people with CFS/ME.

Out of that idea, grew my hypothesis that CFS/ME is caused by dysregulation of hydrogen sulfide metabolism. Further I postulate that the multi-system disturbances in the homeostasis of endogenous H2S result in mitochondrial dysfunction.

Research on H2S – the gas that causes the characteristic smell of rotten eggs – dates to the 1700’s. At high concentrations, H2S is instantaneously deadly, on a par with cyanide. At low concentrations, some evidence suggests that H2S has beneficial effects and can act as an endogenous biological mediator. In fact, the brain, pancreas and the gastrointestinal tract produce H2S. Endogenous H2S plays a role in regulating blood pressure, body temperature, vascular smooth muscle, cardiac function, cerebral ischemia, and in modulating the hypothalamus/pituitary/adrenal axis. It even has been called a “master metabolic regulator”.

We refer to CFS/ME as a systemic disease, but no unifying thread has been found. H2S directly affects the neurologic, endocrine and immunologic systems—the very systems most involved in CFS. In persons with CFS/ME, one plausible etiology is an increase in the activity of endogenous H2S, thereby inhibiting mitochondrial oxygen utilization.

In this view, fatigue and the other CFS/ME symptoms could be due to diminished physiological and cellular energy due to reduction in the capacity of mitochondria to utilize oxygen and synthesize ATP.

Specifically, H2S binds to the mitochondrial enzyme cytochrome c oxidase, which is part of Complex IV of the electron transport chain, and attenuates oxidative phosphorylation and ATP production. Consistent with this finding, recent research on low level H2S toxicity points to increased formation of free radicals and depolarization of the mitochondrial membrane, a condition that would decrease ATP synthesis.

If poisoning renders mitochondria inefficient, one would expect cells to shift to anaerobic mechanisms, a shift that has been reported for CFS patients. Also consistent with this hypothesis is the fact that mitochondria are organelles descended from ancient eukaryotic sulfur-utilizing microbes. Thus, it is not surprising that they show a very high affinity for sulfide. In other words, they have retained the ancient capability of utilizing this gas.

Given a predisposing genetic background, H2S may lead to genomic instability or cumulative mutations in the mitochondrial DNA.

Alternatively, the effects of H2S could be initially mediated by changes in the redox potential of cells or changes in their sulfur metabolism. Of importance, H2S plays a pivotal role in both aerobic and non-aerobic organisms as a signaling molecule. Bacteria in the gut both produce H2S and utilize it as a substrate alternative to oxygen.

This is of particular relevance in the gastrointestinal tract, where unusually high levels of gram-negative bacteria, which increase intestinal permeability have been found in patients with CFS/ME. In addition to bacteria, many of the foods and substances people with CFS are sensitive or allergic to produce H2S under certain conditions, such as mold, milk, eggs, wine, corn syrup and the ever-ubiquitous yeast. CFS/ME is a model disease for multi-system disturbance.

It is my hypothesis that the mitochondria in patients with CFS/ME, organelles required by every cell to sustain life, are unable to adequately utilize oxygen. This mitochondrial disturbance could be due to the combined effects of anaerobic conditions known to occur in CFS and associated lowlevel H2S toxicity. This increase in H2S alters fine signaling necessary for body homeostasis and, in my hypothesis, causes CFS/ME.

New discoveries on H2S are being made every day. I would encourage you to go to PubMed or Google and type in your area of research and “H2S”. If you are interested in cardiac function, you will find last week’s article in Science Daily about John Hopkins’ Solomon Synder’s finding that H2S controls blood pressure. If you are interested in catecholamines, you can read about the inhibitory action of H2S donors on norepinephrine. If you are interested in immune function, you will find that exogenous hydrogen sulfide induces functional inhibition and cell death of cytotoxic lymphocyte subsets of CD8 (+) T cells and NK cells. If you are prescribing vitamin B-12 to your patients, you will see evidence supporting hydroxocobalamin as an antidote against H2S poisoning, and so on.

My hypothesis paper does not address the fact that H2S is increasing in the environment as a result of global warming, natural gas and crude oil refining, centralized animal feeding operations, and chemical processes. It seems logical, though, that external levels could affect internal levels, just as oxygen does.

Just yesterday I came across an article in last week’s Science magazine about the role green sulfur bacteria played in the PermianTriassic extinction, as H2s levels rose and oxygen decreased in the oceans. In summary, I ask you to keep an open mind and support this idea.

A simple program could be undertaken. There are several genetic polymorphisms and enzyme deficiencies related to H2S and sulfur metabolism that should be investigated, after which H2S and associated chemicals such as thiols and glutathione levels in the body could be assessed. As H2S cuts across disciplines and appears to be implicated in several diseases, I think it would be an important focus for NIH. I feel confident that such a program would lead to discoveries. It may well provide a unifying lens through which to view the diverse manifestations of this complex disease.

With determination and resources, we may discover that the disparate parts so many dedicated people have been researching for two decades can begin to add up to a new understanding of this very complex disease. Thank you.
Click to expand...