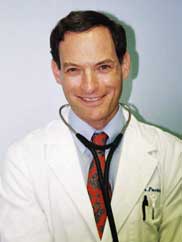 In "Dysfunction Junction" Dr. Pocinki demonstrates how fragile the autonomic nervous system is in chronic fatigue syndrome (ME/CFS). During his testing the ANS jumps around like a chicken with its head cut off - not knowing where to go or how to settle down.

Pockinki shows how even mild stresses can overburden this fundamentally important system responsible for maintaining our body's homeostasis (functioning). When ME/CFS gets bad enough ordinarily innocuous stimuli such as light or sound can provoke an exaggerated ANS response. Even during rest the ANS has trouble settling down.

(Thanks to Corey for finding a copy of the original article)

Autonomic nervous system (ANS) dysfunction is a common feature of CFS, and can cause symptoms in virtually every organ system. Circulatory symptoms include lightheadedness, cold hands and feet and palpitations or anxiety. In the digestive system, autonomic dysfunction can cause nausea, cramps, constipation, diarrhea and bloating.

Autonomic dysfunction can also cause abnormal breathing and urinary patterns, and problems with balance and even vision.

With the availability of new in-office technologies for measuring ANS function, it is easy to demonstrate not only the nature of the autonomic dysfunction in CFS patients, but the benefits of treatment as well.

Such over-responses to physical or emotional stresses, often followed by over-corrections, are responsible for many of the ANS problems associated with CFS.

Chronic stresses such as sickness, pain, emotional stress and even fatigue itself can raise sympathetic activity, producing the tired but wired sensation and making it hard to sleep.

Acute stresses can trigger sympathetic surges, making you jittery and anxious (a physical, not psychological, phenomenon). Worse, sudden increases in sympathetic activity can trigger excessive parasympathetic corrections, causing nausea, sweating, lightheadedness, diarrhea and of course, even more fatigue. Even sensory stimuli, such as bright lights or loud noises, can trigger an exaggerated response, resulting in sensitivity to light and sound.

Above is a slide (missing) comparing a healthy person's results during a six-step test, comparing them to a person with CFS and dysautonomia on the right.

Note: Even sitting quietly at rest for the first five minutes (period A), there are excessive autonomic fluctuations, as if the ANS is struggling to regulate heart rate and blood pressure even at rest, with no stress. 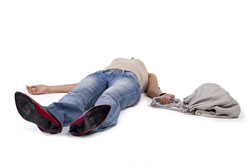 With deep breathing (B), there is a small increase in parasympathetic activity, but the body over responds so much that when the deep breathing phase ends, the body feels the need to correct for this with a big sympathetic surge at the beginning of the rest period (C).

This sympathetic excess then triggers an even bigger parasympathetic surge, slowing the system so much that there is no sympathetic response at all in stage D, when sympathetic activity should be stimulated.

The initial sympathetic-parasympathetic swing on standing was the ONLY time during this test when the patient had any symptoms she was very transiently lightheaded. All of the other autonomic fluctuations did not produce any symptoms, suggesting that many CFS patients may have significant autonomic dysfunction and be unaware of it.

If you think of the energy expended with each increase in sympathetic activity, you can see how a CFS patient could sit most of the day, stand up a few times and still be exhausted at the end of the day.

Below are the test results from another patient with CFS. At the time the test in the left panel was done, she couldn't concentrate enough to work, was too tired to do almost anything and yet, was unable to sleep. Sound familiar?

In the panel below right, you see the improvement in her autonomic function after 18 months of treatment for pain, sleep, depression and autonomic dysfunction.

These results are of course still not normal, but are vastly better than the previous ones, so much so that at this point, she had returned to work full-time. When I saw her a few weeks ago, she had just gone on a five-mile hike.

I think this patient and these pictures, which are typical of virtually every CFS patient I have tested in this way, say more about the importance of autonomic dysfunction in CFS than any words can.

(Editors Note: There is no single medication that can be prescribed to treat ANS dysfunction and addressing all the problems it causes generally requires an individualized approach using medications, attention to diet, supportive care and lifestyle adjustments.

Dr. Pocinki is a clinical associate professor at George Washington University Medical Center and a fellow of the American College of Physicians. He has served the D.C. Medical Society in a variety of capacities, including as a member of its board of trustees, and was recently honored by the Medical Society with its Distinguished Service Award. He has also served as the president of the D.C. Society of Internal Medicine and was named the national Young Internist of the Year by the American Society of Internal Medicine in 1997.

I'd appreciate a link to the original article or, alternatively, the test results cited in article. The Solve CFS website link leads to a "page not Found". Thank you!
A timely reminder, thanks ;-)

Cort
Thanks! I love this article :)
Read more…