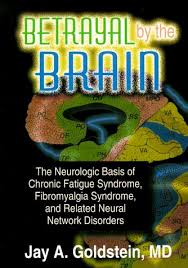 Dr. Jay Goldstein (now deceased) was a psychiatrist and psychopharmacologist. He published over forty papers in peer-reviewed journals, often related to pharmacotherapy, and pioneered the use of medications for off-label applications. Dr. Goldstein also...
Click to expand...

I live in Dr. Goldstein's neck of the woods and got sick when he was in his heyday. He had his own office because his ideas were so out of left field everyone was afraid of being sued if they are affiliated with him.

If I remember correctly, people would go into his office and pretty much spend the day there as he tried one thing after another. Depending on what you took depended on how long between the next thing.

And this was all experimental so it was the sickest of the sick that went to him. Those who were desperate and had no where else to go. And there was not a lot of people to go to back then.

One guy Dr. Gupta, who is still at UCI, was rx'ing interferon injections. One other place was The Center for Special Immunology (where I got dx'd) with Dr. Daryl See. And some of you may remember what happened with him and to CSI.

I got fired by the guy I was seeing because I wouldn't buy the 50 plus supplements he wanted me to take from his office.

Staff member
50 plus supplements! - I wonder how your body would have broken those down...
Some of Goldstein's ideas are still relevant - time will tell how far ahead of his time he was...
Erica is so good at doing stuff like this.

Cort said:
50 plus supplements! - I wonder how your body would have broken those down...
Some of Goldstein's ideas are still relevant - time will tell how far ahead of his time he was...
Erica is so good at doing stuff like this.
Click to expand...

He absolutely was ahead of his time. You'd think someone else would pursue this area.