Well, get out the tissues before you start this one.

Many of you may remember Bevan Jeffrey (beaverfury) who tragically passed away in Feb 2015 after feeling hopeless for way too long due to Lyme disease.

He was a good friend to many of us online and clearly a kind and sweet spirit in person to those who loved him best.

I hope someday we will figure these illnesses out so that no one else has to suffer like this. Really he was so strong for so long. As are all of us.

Pat Jeffery can attest to that. She’s lost count of how many doctors and specialists she saw when Bevan was alive — seeking answers to his mystery illnesses.

The pensioner looks across to a painting hanging on the wall. It’s of roses from her garden, painted by her son. Clearly, there’s an urgency in its brushstrokes, as if time’s running out.

“He would say it’s not finished. He agonised over his work for years, but I love it,” Pat says proudly.

I point to another picture — a haunting self-portrait for which Bevan won a local art prize. What could lie behind his glum, penetrative gaze?

“Life’s a bitch,” answers Pat in no uncertain terms.

And that it was. For six agonising years with a bizarre malady of worsening symptoms — ailments that Bevan wrote about in a personal blog.

“I know the old me died as soon as I got this illness,” he wrote. “The pain, the exhaustion, central nervous system, cognitive and gastrointestinal problems (all) inconceivable to my pre-illness self. It’s hard not to come to the conclusion that you are screwed once you get this disease.”

Doctors were of little help to him.

“They said it was all in his head,” sighs Pat.

What changed was when she remembered something she’d seen in a book at home — The Complete Family Medical Guide, by a Brisbane GP, Warwick Carter. “It said Lyme disease is a common blood infection caused by bacteria from a tick,” she quotes from its pages.

There was only one problem — it was isolated to northeast America. How could Lyme be in Australia? Bevan had never travelled overseas.

In 2012, Pat soon had her own medical dilemma. Diagnosed with breast and liver cancer, within a week she had to give up her job as a high school education assistant for emergency treatment. Still she cared for her son, eating through $20,000 of her own superannuation to pay his utility and medical bills. By now his memory was beginning to fade.

“Bevan was a very intelligent boy, and it got to the point where I would say, ‘I’m going to Bunbury tomorrow to have treatment’. And he’d ring me and ask, ‘Where are you, Mum?’. I’d tell him, ‘Bevan, I told you where I was going’. This was really getting at him, that his brain was being affected.”

Pat paid for blood testing at an accredited laboratory overseas. The test results came back positive for Borrelia burgdorferi and two co-infections — conditions that if identified early could be wiped out with a short course of oral antibiotics.

But by now the disease was on the march.

“He said, ‘Mum, I wish I had cancer like you. At least you have treatment, you have recognition and there is an end to it’,” Pat recalls. “He believed he was no good to anyone and would never get better. He did not want to be on this planet.”

The last conversation between mother and son was on the phone on February 23. Little did Pat know that Bevan was penning his goodbyes to loved ones.

“Thanks to Mum, who has endured everything to keep me alive,” he wrote on his blog. “I can’t help waiting for medical science to find the underpinnings of this disease so that future suffering may be prevented for many people.”

Pat, who shared her story in a submission to the Senate inquiry, said his last words were: “I’ll see you tomorrow.”

“And then I got a call to say he had overdosed. He didn’t want to die, but he wanted to have peace.”
Click to expand...

Thanks for posting this @Remy I'm glad this article is out there.

Who Me? said:
Thanks for posting this @Remy I'm glad this article is out there.

@Remy do you have the picture he did?
Click to expand...

Yup. It's hanging on my wall!

Remy said:
Yup. It's hanging on my wall!
Click to expand... 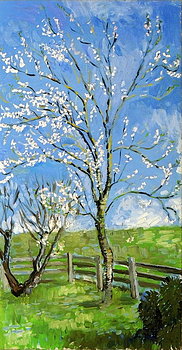