Cort Johnson, David Tuller to be recognised by the IACFS/ME 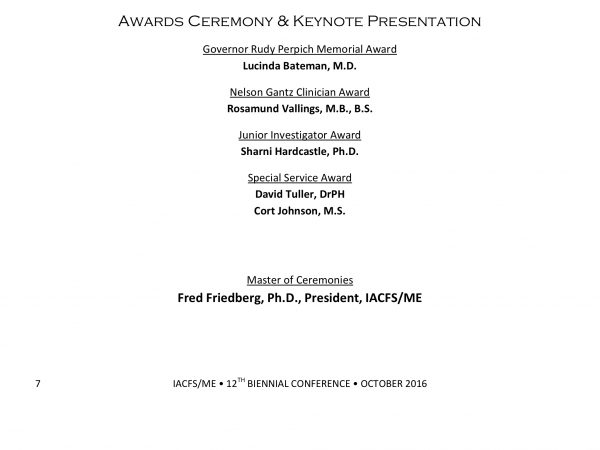 Here is a screen shot of the current 2016 IACFS/ME conference schedule describing that Cort and David Tuller will recieve awards. Congrats to both!!

You well deserve it, Congratulations Cort!

This is great, and so deserving.

Congratulations Cort! And many, many thanks.

Thanks for all you do! Well deserved recognition

Congratulations, Cort. Thank you. Thanks to David Tuller, too.

Here's a nice little picture of Cort, the award winner, and Linda Tannenbaum, tweeted by the OMF. https://mobile.twitter.com/OpenMedF/status/792483073271169024 Congratulations and thank you Cort!
A

Thank you for all of your hard work Cort. What would we do without you?

Staff member
Thanks everyone! It was great to get the reward and I made it through my brief acceptance speech without collapsing = so that was good too

David Tuller was riveting and hilarious. He brought couple of pieces of paper up to the podium, said this is what should happen to the PACE trial and tore them into pieces and then threw them in the air!

He dropped the F-bomb a couple of times.

The guy was a blast.