Staff member
"It's serious stuff. It's particularly frustrating to see cases, and there are hundreds of thousands of them, of people who were healthy and have what appears to be just a flu-like illness but they go to bed and they can't get up for months." Francis Collins​

Hey, Francis Collin's gets it about ME/CFS..Check out what he said about it on Charlie Rose on Nov 3rd, I think it was.

At 15:55 of the interview, Dr. Collins talks about new research at the NIH on chronic fatigue syndrome (CFS):

Ch:arlie Rose: I saw something, it may have been associated with the NIH, about chronic fatigue. 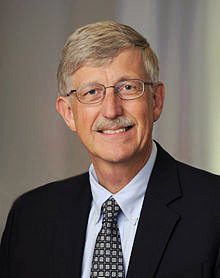 CR: Did you write something?

CR: That's what I thought.

FC: So, I've been puzzled and frustrated about how little we understand about this condition. Now just this… Here's a theme we've been talking about this whole time.

CR: I have chronic fatigue, what is it?

FC: Yeah. [laughs] But chronic fatigue syndrome, people who have that diagnosis, it's a very heterogenous collection of individuals, but the Institute of Medicine has just sort of defined what we should sort of limit it to is people who are profoundly affected by fatigue often coming on after acute…

CR: What do you mean profoundly affected?

FC: You are disabled. You are utterly able to carry out daily activities. You have other things which… exertion seems to make you worse instead of better. And you have sleep disorders. Sleep is not as refreshing as it should be. You have postural hypotension when you stand up, your blood pressure drops, and you pass out.

FC: It's serious stuff. It's particularly frustrating to see cases, and there are hundreds of thousands of them, of people who were healthy and have what appears to be just a flu-like illness but they go to bed and they can't get up for months.

So we just announced we are going to make a big push to try to get the answer here, bring some of these new technologies of genomics, proteomics, metabolomics, and imaging and figure out what is going on in this condition.

And if we understood that, maybe we'd know what fatigue of other sorts is all about. Why do people in chemotherapy get fatigue? We don't really know. Wouldn't it be nice to have that answer. There are so many things you can start to ask about with the technology we have in front of us now.
You must log in or register to reply here.
Share:
Facebook Twitter Reddit Pinterest Tumblr WhatsApp Email Link