I tend to think that everyone here has already explored all possible causes of their diseased state.
Perhaps this one is rare as in not known, and escaped the radar.
Here it goes:

I learned that my B6 plasma levels are a bit high in absence of supplementation.
I asked around in hEDS forums, and there were quite a few who've had their levels checked and high too.

Hypophosphatasa (HPP) is a genetic condition with reduced activity of the enzyme alkaline phosphatase mainly known as a bones and teeth disorder. Fatigue and pain are common, specially after exercise or mild exertion - sound familiar? Chiari malformation, intracranial hypertension, hypotonia, osteoporosis… There are different types and degrees of severity. There is also the natural progression of the disorder in the adult forms, with what they call a honeymoon phase for the first decades of life – and then sh*t hits the fan.

As one doctor put it: you are swimming in pyridoxal 5′ phosphate – a B6 vitaminer, PLP or P5P for short – but it can’t get to where it needs to go, including crossing the blood brain barrier. PLP is involved in so many processes – to understand the full extent of how that may affect different systems is yet to be properly researched and tabulated nicely in the official medical literature.

Here is a presentation by a doctor expanding on this notion and symptoms they see in clinical practice
Some have been misdiagnosed with ME/CFS or fibromyalgia first.

It seems it affects some with hEDS. It may form part of our picture - remember little is known about the molecular cause of it...
And who is to say that you can't have two genetic conditions?

How can you know if this affects you? Check your ALP levels. Its usually done as part of a standard blood test, so you probably have the results already in your latest check-up. ALP levels fluctuate - so I recommend checking your prior history of test results too.

--< The cut-off point for what is considered low is different from the one on the regular lab ranges and is age and gender dependent Check with this range [see image] or towards the end of the link there is a calculator. It seems that some may have ALP a little bit higher than the official cut-off point (but still on the low side of normal) and it could still be HPP. More research is needed. >-- 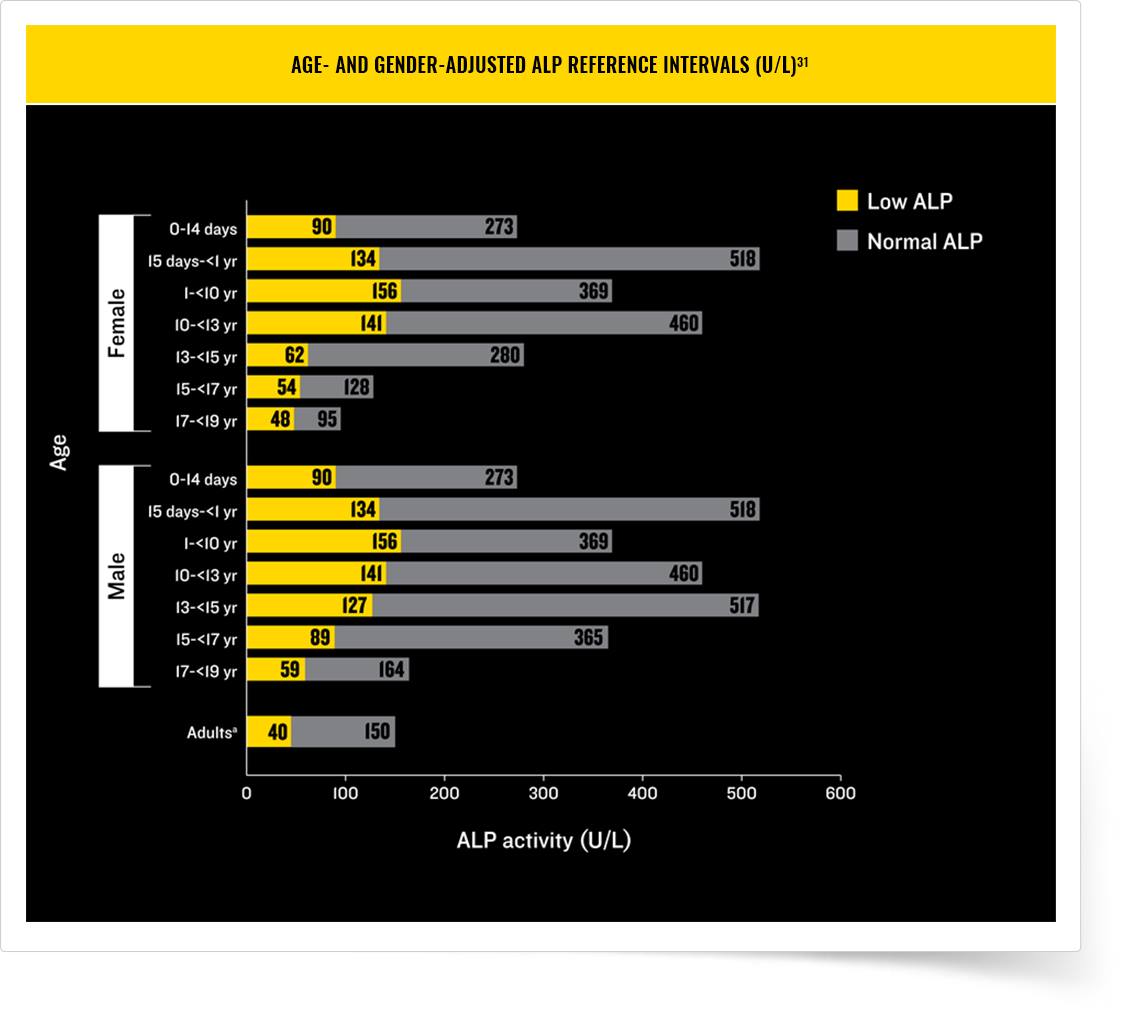 Learn how alkaline phosphatase (ALP) and other lab values can help distinguish between hypophosphatasia (HPP) and other metabolic disorders.

If you do need help with diagnosis and doctors - this is a good resource to check https://www.softbones.org
Their patient outreach is super. They can help track a specialist in your area should you find this may apply to you.

There is one more disorder that can present with elevated plasma B6. More on that soon. ?

The way I see it, our doctors have ruled out common conditions before arriving at our clinical diagnoses. Due diligence in ruling out rare conditions with established parameters/testing is missing. A disease can be rare because a very small percentage of the population have it. It can also be rare because few know about it. There is little point in suffering needlessly.

>> If your B6 levels are high, I'd love it if you could let me know. If this true for more than a handful - a substantial finding -I'm collecting info to share with interested researchers. <<


P.S> If there is another section of the forum more appropriate to post this under, let me know too!
Last edited: Sep 1, 2020

I see that there is a plasma B6 at Labcorp, but no serum. Is either acceptable?

Yes! Plasma/serum is the same for the sake of this test.
Did you check you ALP levels, per the range for HPP?
ALP is checked as part of a standard blood test, the yearly check up, etc.

Meirav said:
Yes! Plasma/serum is the same for the sake of this test.
Did you check you ALP levels, per the range for HPP?
ALP is checked as part of a standard blood test, the yearly check up, etc.
Click to expand...

I did, mine are lowish (typically low 50s) so not low *enough*. The lowest one I ever had was 43 and that was only once. I've got measurements back about 7 years...

My ALP is like yours.
I did join an HPP forum, and I also contacted the Soft Bones group.
In both, they told me that some have normal low ALP.
It doesn't correspond with degree of severity.

Check your B6 next, I advise, If you can, do it twice:
From what I am learning from other people's experiences in the hEDS / FMS / ME/CFS community,
when symptoms are more severe (crashing?) is when most likely B6 will be higher.
In recovery, when you are doing better, B6 may go down or fully return to normal.
ALP fluctuates in the opposite direction, so you could test B6 and ALP at the same time,
and then try it again when you are in the opposite state.
And also, if you are taking any supplements that have B6 - maybe good to stop and wait a month or two and do the test.
I tested twice and twice it came back high. The second time, I tested when I was crashing badly and it was somewhat higher.
There are to other tests you can do, I forget one and the other 24-hour PEA (an amino acid -not the same as palmitoyethanolamide nutraceutical).

I was reading a research paper on osteoporosis in classical homocystinuria.
All pathology in the homocystinurias has traditionally been ascribed to high homocysteine
(as a theoretical that somehow became status quo...)
Some doctors and researchers have finally started questioning that assumption.
This one paper points towards H2S being the source of the osteoporosis

Likewise, in hEDS they have theorized that all pathology arises from defective collagen.
Given that they have not identified the gene, and that problems are so widespread and multisystemic,
I have wondered if the model of pathology in hEDS goes like this:
whatever is gong on, collagen is one of the things affected.
That opens different avenues for research - and also treatment.
Which many of us have found outside the medical world.

I have wondered also if the osteoporosis in hEDS is due to oxidative stress.
(I do have some findings that lead me to that thought)
Which brings up: is osteoporosis a thing in ME/CFS and FMS?
is it something that is checked at all?

Also because Marian Lemle's model of ME/CFS caused by excess H2S.
If it is true for some - could it be they also have osteoperosis?

Or is there something else at play, the oxidative stress or H2S + low ALP function (that is not HPP driven) or + a problem with the collagen?

I have many questions
We need more research.

I think it is worth while to check out the B6
And if it is not HPP.
and there is an as-of-yet unidentified reason why some of us have high B6,
that is also good to know
because
there was a small study about 20 years ago that found low level of B6 in ME/CFS
and it seems since then that became status quo
and people supplement blindly with B6 thinking they need it
and it may be not so.


Also, it is the one thing that my doctors have tested that is not normal.
They 'accused' me of taking supplements at first.
And they finally think something is wrong
that is of merit to be investigated.

There is one more thing that can be related to B6 that can also be investigated and confirm or rule out its diagnosis.
I'll post on that at some point.