“If you live anywhere from Maine to Virginia, it’s almost impossible for Lyme disease not to affect someone you know, someone in your family or yourself,” says center founder and director John Aucott, M.D.,
Click to expand...


Lyme disease is the sixth most often reported infectious disease in the United States. It is believed to cost the U.S. economy 1.3 billion dollars a year in treatment costs alone. Chronic Lyme disease, which is not called "Post-treatment Lyme Disease Syndrome (PTLDS) is a major problem that hasn't received major help. Studies indicate that people with PTLDS have $3,798 higher total health care costs and 66% more outpatient visits over a 12-month period, relative to those who don't have PTLDS. Despite its prevalence - over Lyme disease receives $23 million dollars a year in funding from the NIH. No major medical centers had dedicated Lyme disease units - until now.

Only a very small perccentage of tick bites can transmit Lyme disease and antibiotics are effective for most when taken early in the disease, but about one out of five or six people treated with antibiotics comes down with a chronic and potentially serious disorder. 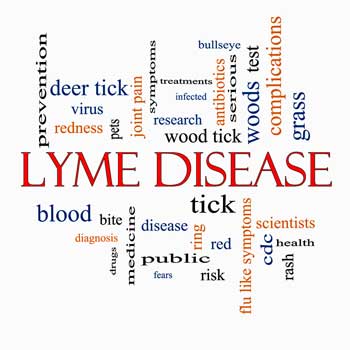 (The similar symptoms to chronic fatigue syndrome and fibromyalgia (extreme fatigue; musculoskeletal pain; arthritis like pain in the joints; and cognitive, neurological and cardiac symptoms) and the infectious onset makes one wonder if PTLDS patients fit the post-infectious illness subset of ME/CFS. Studies indicate ME/CFS can be triggered by a wide variety of pathogens.)

The new center, which will include a repository for blood and tissue samples from patients will start off with a bang with the SLICE (Study of Lyme disease Immunology and Clinical Events) study. Similar to the Dubbo project in ME/CFS, SLICE will study and follow patients early in the disease as they receive antibiotics. It will assess symptoms and cognitive measures and markers in the blood and collect samples of immune cells, DNA and RNA in order to attempt to determine what goes wrong in those patients who do not recover.

Studies of primates infected with Lyme disease suggest that the dorsal root ganglia - a prime candidate in ME/CFS - are inflamed and exhibit neurodegeneration. Significant numbers of glial cells that surround the sensory nerves have died. Anti-inflammatories such a dexamethasone were helpful in limiting the damage caused by the disease.

Tick and Mosquito Study at Simmaron

On the ME/CFS front the Simmaron Research Foundation is raising money to assess the exposure to tick bite and mosquito-borne pathogens in ME/CFS. The first research group to be awarded access to samples from the NIH directed XMRV investigation the study aims to assess the presence of antibodies to vector-borne pathogens in 293 highly characterized CFS/ME patients and controls. This study will assess the similarities and differences in exposure to multiple tick and mosquito-borne pathogens among this geographically diverse patient cohort, with the potential to aid in subsetting and identifying a role of infection in precipitating CFS/ME.
Last edited: May 19, 2015

GREAT!!!!! Addressing this has been one of my best helps.

Mona-Alisa said:
This is great news! Are they only seeing newbies?
Click to expand...