I've been using Mg. malate for 2-3 years, it's been my preferred mg. Unfortunately it's been unavailable at iherb for many weeks, and I'm running out. I have malic acid, can take it separately. Any suggestions for next best form of mg? thanks.
T

Thank you, I'd meant to look for glycinate, and it totally slipped my mind.

Veet said:
I've been using Mg. malate for 2-3 years, it's been my preferred mg. Unfortunately it's been unavailable at iherb for many weeks, and I'm running out. I have malic acid, can take it separately. Any suggestions for next best form of mg? thanks.
Click to expand...

If you're interested in cognitive benefits in addition to other magnesium benefits, magnesium l-threonate supposedly gets more magnesium to the brain. It costs quite a bit more than malate or glycinate. Worth it if you want cognitive effects, but not if you're after magnesium for other reasons.

Citrate if you need help moving things! Otherwise watch it.

Thanks for all the responses. I used threonate for some while, didn't seem to have long-term benefits. Used mg citrate and mg oil in footbaths in the past, epsom salts may/may not have been a problem due to sulfur. In this case, the first answer was the one I was looking for, and couldn't remember. I was able to promptly complete my iherb order. Great job.

@Veet Threonate had me jumping out of my skin. I remember some saying it's stimulating but I can't remember the details. That was my experience.

The best forms of magnesium

Magnesium citrate -- Magnesium citrate is the most popular magnesium supplement, probably because it is inexpensive and easily absorbed. Since citric acid is a mild laxative, magnesium citrate functions as a constipation aid as well as a magnesium source. It is a great choice for individuals with rectal or colon problems but is unsuitable for those with loose bowel movements.

Magnesium glycinate -- Magnesium glycinate (magnesium bound with glycine, a non-essential amino acid) is one of the most bioavailable and absorbable forms of magnesium, and also the least likely to induce diarrhea. It is the safest option for correcting a long-term deficiency.

Magnesium chloride -- Though magnesium chloride only contains around 12 percent elemental magnesium, it has an impressive absorption rate and is the best form of magnesium to take for detoxing the cells and tissues. Moreover, chloride (not to be confused with chlorine, the toxic gas) aids kidney function and can boost a sluggish metabolism.

Magnesium carbonate -- Magnesium carbonate is another popular, bioavailable form of magnesium that actually turns into magnesium chloride when it mixes with the hydrochloric acid in our stomachs. It is a good choice for people suffering from indigestion and acid reflux, since it contains antacid properties.

The worst forms of magnesium

Magnesium oxide -- Magnesium oxide is the most common form of magnesium sold in pharmacies, but it is non-chelated and possesses a poor absorption rate compared to those listed above.

Magnesium sulfate -- Magnesium sulfate, also called Epsom salt, is a fantastic constipation aid but an unsafe source of dietary magnesium, since overdosing on it is easy.

Magnesium glutamate and aspartate -- Avoid these two forms of magnesium completely. Glutamic acid and aspartic acid are components of the dangerous artificial sweetener aspartame, and both of them become neurotoxic when unbound to other amino acids.

Staff member
This one too on magnesium plus malic acid

i just keep asking myself from day to day what i am treating with any new medication or supplement i add to my list... because nobody seems to exactly know the chemical reactions that happen in CFS/ME or whatever you call it. i know this whole thing is critical but it's better to know the exact mechanisms first and then make interventions.
throwing in 20 different pills is also an approach though, i call it the shotgun approach. I can understand you though, everybody here seems to be on the edge of sanity because it's so damn difficult to get a proper treatment and many here seem to go through hell for a long time and have had a decent life once till the day they got ill and now try out everything they can to get back to the life they knew... it's so sad to see this... i wish i had some answers...

Just a bit more on why epsom salts in baths is highly useful. Since at the time all supplemets were having a bad effect on me, this just gave me a nice hit of calm. The study by Rosemary in Birmingham suggests deficiency can be corrected this way.

I think the Albion chelates are very high quality. I use Doctor's Best and it is a chelate of glycine and lysine, both of which are typically helpful AAs for MECFS. 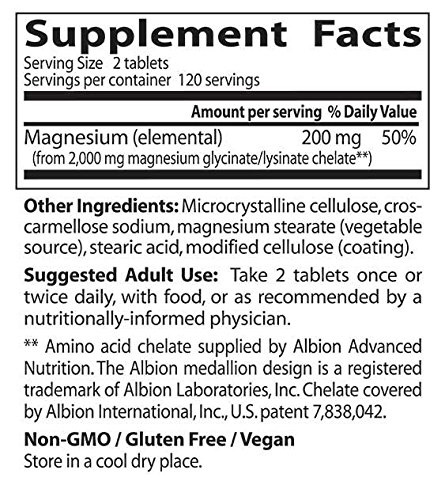 Remy said:
I think the Albion chelates are very high quality. I use Doctor's Best and it is a chelate of glycine and lysine, both of which are typically helpful AAs for MECFS. View attachment 1008
Click to expand...

That's the one I've ordered. Looking forward to trying it out.

I've just begun using Dr's Best Mg glycinate. Happily, I need half of what I was using w/ mg malate.

BTW, in reading and watching Dan Neuffer’s info. (no, I haven’t enrolled in his ANS Rewire program), he mentions that one of the first thing he recommends is, if you aren’t already on it, to start taking supplemental magnesium. I haven’t been because it messes with my IBS.

But I found a type that doesn’t. It’s called TRAACS (reg. trademark of Albion Labs) magnesium bisglycinate chelate. On Amazon, I bought the lesser expensive one by Viva Labs.

I had been going for acupuncture and PT, paying a high Medicare co-pay, for spasms in my shoulders and upper back, and the terrible headaches they bring on. Didn’t work.

Within a few days of taking the magnesium, I felt marked relief as well as more energy, and I haven’t had a headache in more than a week. None of my other supplements contain much magnesium, and I hadn’t given it any thought before.

I cannot take the magnesium w/malic acid because it’s hard on my intestines and too stimulating for me.

It’s strange how we come across things now and then, by coincidence, and they help us feel a bit better. Hopefully, that will continue. Definitely not recovery by any means, but helpful. Cheers! Judith
Click to expand...