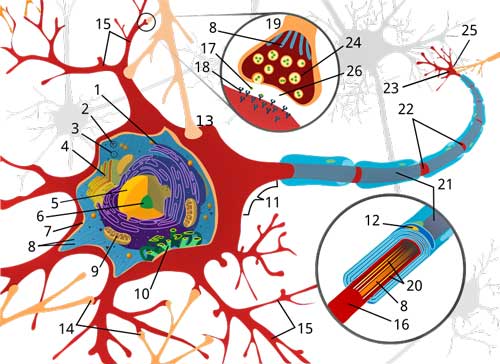 Study finds reduced nerve density (small fiber neuropathy) in the cornea of the eyes in FM patients. Why is this big news? Because it suggests that small fiber neuropathy may be present in nerves all over the body - not just in the skin as has previously been found. They apparently went after the nerve fibers in the eye because they are particularly dense there. I'm trying to get in touch with Martinez-Lavin. He's the author of When Stress Causes Distress - about FM. He believes sympathetic nervous system activation is a key player in FM.

Methods: We studied 17 female patients with fibromyalgia and 17 age-matched healthy control subjects. All the participants completed different questionnaires in regards to the symptoms of fibromyalgia including a neuropathic pain survey. A central corneal thickness scan was obtained with a confocal microscope. Nerve measurements were made by a single ophthalmologist without knowledge of the clinical diagnosis. Stromal nerve thickness was defined as the mean value between the widest and the narrowest portion of each analyzed stromal nerve. Corneal sub-basal plexus nerve density was also assessed.

Conclusion: Women suffering from fibromyalgia have thinner corneal stromal nerves and diminished sub-basal plexus nerve density when compared to healthy controls. Nerve scarcity is associated with neuropathic pain descriptors. Small fiber neuropathy may play a role in the pathogenesis of fibromyalgia pain. Corneal confocal microscopy could become a useful test in the study of patients with fibromyalgia.
Click to expand...

I have had "idiopathic " neuropathy in my left foot for years. And parts of both legs are numb. I do belive ALL parts of our bodies are affected because there are so many strange tag-alongs with this illness.
You must log in or register to reply here.
Share:
Facebook Twitter Reddit Pinterest Tumblr WhatsApp Email Link