I've been trying to boost mitochondrial function and scavenge glutamate with high doses of oxaloacetate...but it's expensive and I'm not actually sure it's doing anything.

I saw this diagram...and it got me wondering about succinate instead. 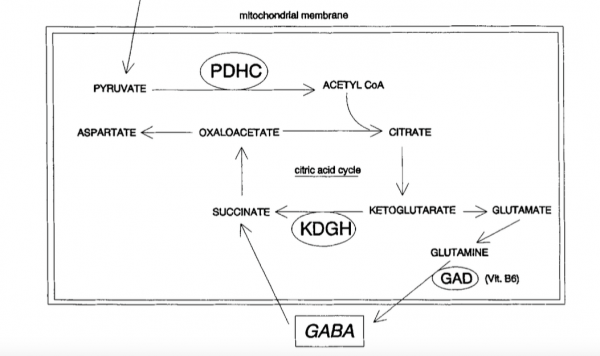 If I'm theoretically not making *enough* GABA due to GAD antibodies, maybe this is a way to bypass that system?

Strangely enough, succinate is also used for menopausal symptoms. I can't quite make that connection yet myself. But the most popular product, Amberen, also contains MSG and that seems counterproductive when there are products available without it.

We conclude that mitochondrial dysfunction and energy deficits in oxidant-injured RPTC are ameliorated by succinate, and we propose that succinate supplementation may prove therapeutically valuable.

Succinate 1) uses an alternate pathway of mitochondrial energy metabolism, 2) improves activity of complex I and oxidation of substrates through complex I, and 3) decreases oxidative stress and cell lysis in oxidant-injured RPTC.
Click to expand...

From the supplement info:

Succinic acid or amber acid is a dicarboxylic acid and is an essential component of the Krebs or citric acid cycle, a key metabolic pathway regulating respiratory chain in mitochondria.

Succinic acid expresses various biologic activities: 1) it serves as a natural antibiotic due to its modest acidic or caustic nature; 2) it reduces fatigue and improves brain performance; 3) it decreases gastric secretion relaxes gastric/duodenal smooth muscles; 4) it eases perimenopausal hot flashes; 5) it reduces the effects of hangovers by activating the degradation of acetaldehyde - a toxic byproduct of alcohol metabolism - into CO2 and H2O through aerobic metabolism; 6) it reduces hyperactivation of immune system associated with acute and chronic infectious processes; 7) it reduces joint pain; 8) it accelerates iron absorption; 9) it normalizes adrenal function; 10) it improves glucose control and protects liver function.
Click to expand...