Overview Discussion
It's the weirdest idea: lying on hundreds of hard plastic points could help you feel better, even sleep better. Even weirder is the idea that it could help fibromyalgia patients whose bodies are riddled with tender points. 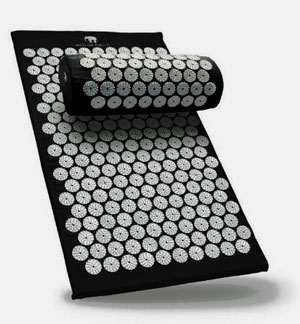 Upgrayedd on the Health Rising Forums recently found to his surprise that his acupressure mat worked like a charm.


Has anyone else out there tried an Acupressure Mat? It's about the size of yoga mat, and it's covered with what look like plastic cleats, like you'd see on a golf shoe.​
​
You are supposed to lie on it for awhile in bed before going to sleep and it makes you drowsy and you fall asleep easier.​
​
I bought one a couple of weeks ago in a fit of insomnia rage and... IT WORKS FOR ME!​
​
I cannot even believe this torture device can make anyone sleepy, but I have fallen asleep within a few minutes of removing it each night, after a tough couple of weeks where every night I was awake for hours. I still tend to wake up a couple of times throughout the night, but at least I'm starting out asleep.​
​
I"m not gonna lie to you... It hurts, especially the first few times, but it does something to the nervous system, releases endorphins or something, and within a few minutes I'm yawning.​
​
​
Acupressure mats are another largely untested alternative medicine device. Studies are few but a small one featuring healthy people suggested these mats may be able to reduce heart rates during sleep (high in ME/CFS/FM), increase heart rate variability (low in ME/CFS/FM), slow breathing and possibly improve circulation.

Some sites assert that acupressure mats release feel-good chemicals called endorphins. Perhaps the slow pressure from them allows trigger points and contracted muscles to release, allowing the circulation to wash away toxins. (One site recommends drinking fluids after using them to help detoxify).

Still, no FM or ME/CFS studies have been done, and I was able to find precious little even anecdotal information on how effective they are in these diseases. 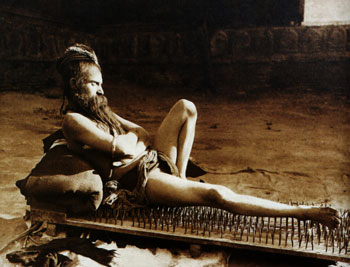 Acupressure mat advocates point to the beds of nails that yogis sometime sleep on as inspiration. Distributing one's weight across thousands of hard points results in little pressure being applied to each point. In fact, it's possible to bounce water balloons off of a bed of nails.

Wikipedia, however, cites a Russian music teacher named Ivan Kuznetsov as the originator of today's acupressure mat. Finding that only acupuncture would help his chronic pain, Kuznetsov created his own "bed of nails" as an acupressure device.

It's not necessary to sleep on them; some people just lie on them for half an hour to get a boost in energy. You can also get pillows and cushions studded with hard plastic nail-like points for your neck pain.

Reactions, of course, can vary. Some people need to adjust to them slowly. Others they may not work for.

The mats generally get good reviews on Amazon.com and they're relatively cheap (< $50). One company warns that people with neuropathies and some other issues should not use them.

Have you tried an acupressure mat? Have you tried sleeping or relaxing on a bed of nails? Interested in trying one? Discuss this resource here.

(Health Rising is not affiliated with any acupressure mat producers. However, if you purchase one using our Amazon search bar to the right HR will get a small cut.)

(Beds of Nails images from BedofNails.org and Wikimedia)​