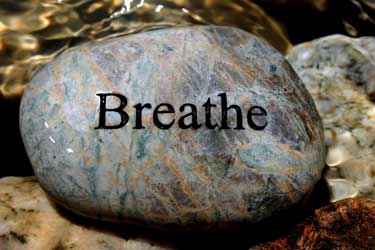 Dr. Charles Lapp has reported that the hunched over posture seen in many ME/CFS/FM patients also increases the difficulty of taking the deep relaxing breathes so important.

The autonomic nervous system is one of the few systems in the body we have control over. Employing breathing techniques over time may allow it to reset improving calmness, sleep, and even cognition and reducing pain.

One of the first techniques Staci Stevens, an exercise physiologist with ME/CFS, employs with ME/CFS/FM clients is to have them take deeper breaths.

The exhalation (or relaxation) phase of the breath tends to be inhibited in ME/CFS/FM. Simply by lengthening one's exhalations while breathing through one's nose (or if that doesn't work one's mouth) can induce a state of calm and reduce pain and tension.

He recommends that people with ME/CFS/FM begin with 10 minutes of focused breathing/meditative techniques in the morning and evening and work up to as much as an hour a day. Friedberg has found that these practices can greatly help ME/CFS/FM patient reduce insomnia and enter in deeper sleep more quickly.

"While sitting in a comfortable chair or lying down and breathing through your nose say silently to yourself ‘reee’ as you inhale and ‘laaaxxx’ as you exhale."
Click to expand...

The Buteyko breathing method has been recommended for ME/CFS/FM.

Alternate nostril breathing is believe to induce the ‘rest and digest’ response and reduce the ‘flight or fight response’ - just what is needed in ME/CFS/FM. It is often used to calm the mind down at the beginning of meditation sessions.

Ashok Gupta, the creator of the Amygdala Retraining Program (and a former ME/CFS/FM patients) recommends using alternate nostril breathing as a calming mechanism.

When I tried Wim Hof techniques it was extremely painful, which shouldn't be a symptom. After blood clot resolution (multiple PE), I did this yoga thing where I wrapped my elbows around a straight object like a broom handle and breathed. It was more comfortable and I still do that. It can be found in the Iyengar book which is probably my favorite yoga book. (It's a big heavy textbook type of book, and not very user friendly but it has great stuff in it). Thanks for pulling together all these methods in one place. Very helpful!
Upvote 0 Downvote
Read more…