Could a Diet Reduce the Pain in Fibromyalgia? A FODMAPS Study Suggests Yes

Overview Reviews (1) Discussion
Can something as simple as a diet reduce the pain in fibromyalgia? We know that diet can have a huge influence on health, but little study has been done on their effects on pain. Some evidence does suggest that some diets may be able to reduce or increase pain levels possibly through influencing inflammatory processes. Ketogenic diets have reduced pain in laboratory animals. Pro-inflammatory diets have been proposed to contribute to chronic pain states, and some think that adding anti-inflammatory foods promoting foods may be able to relieve pain. 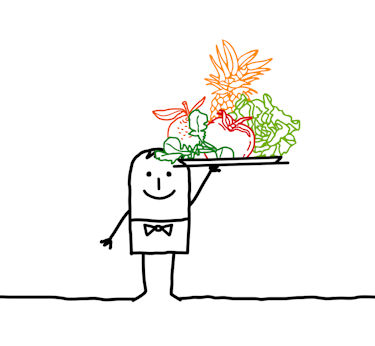 FODMAPS are foods made up of short-chain sugars that tend to pass through most of the gut unchanged. When they hit the end of the gut they get fermented by bacteria there resulting, in some people, in gas and gut distension. The FODMAPS diet came out of the recognition that distension of the intestinal tract – probably caused by high rates of fermentation – is a source of pain in many people with IBS.

Numerous studies indicate that the diet works in IBS: a recent review found that up to 86% of IBS patients get good results from it. Recently, though, the diet's begun to be applied to people with other chronic illnesses. According to Diet vs Disease case studies suggest that a low FODMAP diet may be helpful in autoimmune diseases like rheumatoid arthritis and multiple sclerosis or eczema and migraines that get triggered after meals. One interesting study found that a low FODMAPS diet relieved exercise induced gastrointestinal problems in athletes.
The FODMAPS acronym stands for
Because high amounts of fiber also tend to produce fermentation, high fiber foods are also eliminated. (Note that not all oligosaccharide- or disaccharide-containing foods cause fermentation, but some do.)
The diet is not intended to be permanent as it reduces the consumption of prebiotic fibers believed important in preventing colon cancer. It generally lasts from 4-6 weeks after which higher FODMAPS foods are gradually introduced.

A 2016 study by this group found that a FODMAPS diet reduced IBS symptoms in FM.

The trial lasted 4-8 weeks during which the 38 participants provided researchers a diary of the amounts of each food they ate. The researchers then estimated the amounts of lactose, fructans, galactans, free fructose and polyols (g/day), energy (kcal/day), and macronutrients/micronutrients consumed by the participants. At a second time point high FODMAPS foods began to be reintroduced.

The participants in this study :
To assess the effects of the diet on weight and obesity, weight, BMI, and waist circumference were tracked. Gastrointestinal symptoms and pain scores of different types were evaluated during the study.

The low FODMAPS diet was a partial success. Gastrointestinal symptoms like bloating and constipation declined greatly and fibromyalgia symptoms such as pain, muscle stiffness, and FM severity scores declined by about 25%.

Obesity rates tend to be increased in fibromyalgia and have been associated with increased pain and reduced functionality. The authors touted the reductions in weight, body mass-index and waist circumference achieved on the diet, but while the reductions were statistically significant, they were relatively minor with an average weight loss of 4 lbs (from 152-148 lbs), an BMI reduction of .4 (27.2-26.8), and a waist reduction of 2.5 cms. (33-32") ).

As foods began to be reintroduced, most of the helpful changes produced by the FODMAPS diet appeared to stick. Increases in bloating and IBS symptoms began to climb but were still quite a bit lower than before the diet and the reductions in overall pain largely remained.

Why the diet might be helping is unclear but Dr. Michael Russo believes that FODMAPS diets are starving bacteria in the gut that are promoting inflammation. Since the FODMAPS diet was designed to stop problems with intestinal permeability and the resulting inflammation, that idea makes sense.

Diets are one factor that anyone can conceivably change. Some researchers believe that diet can contribute to central sensitization. Certainly, anecdotal reports suggest that dietary changes can cause major improvements in some people with FM. Study evidence on the effectiveness of diet changes in FM and chronic pain is relatively rare but some studies have been done.

A huge British birth cohort study (n=8572) examining the effect of diet on people with chronic widespread pain suggested that a poorer diet could be contributing to their pain. Women in chronic widespread pain (CWP) were likely to be heavier and have unhealthy diets which included more fatty foods such as potato chips and fries and which featured fewer vegetables than women without CWP. The study suggested that the inflammatory nature of diets high in processed fatty foods could be contributing to their pain. 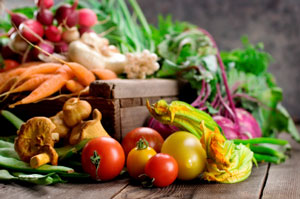 Regular consumption of cured meats and sweetened beverages, on the other hand, was associated with higher levels of depression and lower levels of optimism, respectively.

A dietary assessment study suggested that the FM patients' diets were lower in nutrients than those of the healthy controls. Reduced Vitamin E and protein levels in the FM group were associated with reduced quality of life and increased pain sensitivity, respectively. Another study suggested that in general women with FM probably had better diets (lower consumption of sugars, alcohol, soft drinks) than usual.

If you include artificial sweeteners in your diet you should know that removing aspartame from the diets of two people with fibromyalgia reportedly resulted in the complete resolution of their symptoms.

Similarly, removing "excitotoxins" such as aspartame and MSG resulted in the complete or near complete resolution the symptoms in four FM patients.

"Because high amounts of fiber also tend to produce fermentation, high fiber foods are also eliminated. " This is so true. But it's so hard to break through the brainwashing of "high fiber = absolute good." I can dismiss that absolutism by pointing to the diverticulitis diet. Hmm, fiber is looking more suspect every day, no? I've learned that dal (often hulled, usually split pulses and lentils sold in bulk at Indian markets) does not irritate me, but unhulled lentils do. Soaking them does indeed improve digestibility, at least for me. So the "fiber" I have is coming from these small daring amounts of pulses and rice that I like to cook together.

Did you know that a slice of wheat bread was used at first to try and prove the FODMAP connection? But they realized it was a confounder because so many people have undiagnosed Celiac disease. If I have any amount of wheat, a knife of fire extends through the center of my neck up to my brain, and my bowels shut down, zero peristalsis for days. Yet some FODMAPS are ok in small doses for me. And as I recover, more FODMAPS are tolerable. So I'd cross reference the participants in that study and see if any of them turn up Celiac (they "grew out of" it maybe) or that triggers later.
Upvote 0 Downvote
Read more…