(Thanks to journalist Donna Gregory Burch for allowing Health Rising to reprint her blog on "How to Use Medical Marijuana Without Getting High" from her Fed Up with Fatigue website. (The post, originally appeared on National Pain Report.)

Medical marijuana (MM) is a powerful substance. According to Dr. Ginerva Liptan the THC in cannabis is twenty times stronger than aspirin. She related the story of an elderly woman who hallucinated and ended up in the emergency room after being directed to eat a MM cookie. I know someone who vomited and was ill for hours after drinking too much of a marijuana drink. For me very small amounts of MM candy are all that is needed to produce powerful and positive effects.

Some MM prescription drugs are in clinical trials but the MM situation is like the Wild West right now with employees at dispensaries taking the place of doctors.

It's great to be able to present a blog that provides some guidance on how to use this promising but still unregulated treatment option. From Cort - some images added.)

The research may be slim, but there are plenty of anecdotal accounts indicating marijuana can be effective at reducing fibromyalgia pain. Visit any online fibromyalgia support group, and you’ll find more than a handful of pioneering members who have sworn off pharmaceuticals and instead toke up regularly for pain relief and better sleep.

But if you’ve never tried marijuana before, the idea of using it – even for medicinal purposes – can be scary and more than a little overwhelming.

And then there are those, like myself, who smoked pot 20+ years ago in college. We aren’t afraid of using pot. We know it’s relatively benign (especially when compared to some of the pharmaceuticals we’ve taken for fibro). Still, we haven’t taken the plunge because we don’t want to spend our days stoned out of our minds.

But thanks to the evolving medical marijuana industry, those of us who fall into either of these two groups now have an option. Indeed, there’s a way to use marijuana without getting high!

Using marijuana without getting high …

Cannabidiol-rich (CBD) products give you some of the medicinal benefits of marijuana without having to stumble around the house in search of chips and pizza. CBD made national headlines in 2013 when CNN News profiled the story of Charlotte Figi, a 3-year-old Colorado girl who suffered from up to 300 epileptic seizures a week. Desperate for relief, Charlotte’s parents began treating her with CBD-rich oil, and the result was a miracle. Over time, Charlotte’s seizures slowed to an average of two to three seizures a month. Since then, early studies have confirmed marijuana extracts can be effective in treating epilepsy.

Because of legal constraints, little research has been done on using marijuana as a treatment for fibromyalgia. But a few small studies and patient accounts hint that marijuana may be beneficial. 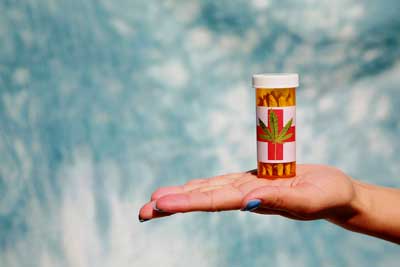 [/fright]In 2011, a small Spanish study concluded that patients using marijuana experienced a significant reduction in pain and stiffness, increased relaxation and an overall improvement in well-being.

Last year, a National Pain Foundation survey of 1,300 fibromyalgia patients found that marijuana is more effective at relieving pain than Lyrica, Cymbalta and Savella, the three drugs approved by the U.S. Food & Drug Administration for fibromyalgia.

Early research indicates that whole-plant cannabis can be effective for pain management, but does CBD work just as well on its own? To answer that, we need more research.

“Rigorous clinical studies are still needed to evaluate the clinical potential of CBD for specific conditions,” said Nora Volkow, director of the National Institute of Drug Abuse, while testifying before the U.S. Senate on CBD in July. “However, pre-clinical research, including both cell culture and animal models, has shown CBD to have a range of effects that may be therapeutically useful, including anti-seizure, neuroprotective, anti-inflammatory, analgesic, anti-psychotic and anti-anxiety properties.”

Most cannabis experts endorse a whole-plant approach. They say using the whole plant creates a synergy of sorts between the 85+ cannabinoids contained in the plant. If you take one of those cannabinoids out, like CBD, and use it on its own, you will not get the full benefit.

But there is a way to still take a whole-plant approach and not feel the psychoactive effects of marijuana. It’s all about using the correct ratio.

Dr. Jahan Marcu, senior scientist with Americans for Safe Access, says a 1:1 ratio, meaning equal parts of THC (the psychoactive component of marijuana) and CBD, gives the benefits of whole-plant cannabis without the high that most people associate with cannabis. In research studies, THC has been found to be particularly beneficial for pain relief, so it’s a key part of the equation.

“You really need the THC in there to get the medicinal benefits of the cannabis,” Marcu said. “CBD has not been found to be very effective by itself. [Using a 1:1 ratio] will probably give you the best chance for a positive therapeutic improvement.” 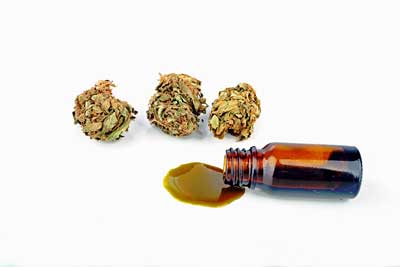 [/fright]Dr. Michelle Sexton, a naturopathic doctor, uses CBD oil as a treatment in her San Diego practice. She usually starts patients at an extremely high CBD to THC ratio (18:1) and then increases the THC content as needed for symptom relief.

“Everyone has to find their comfort zone,” said Martin Lee, founder of Project CBD, a California-based nonprofit dedicated to promoting and publicizing research into the medical uses of CBD and other components of the cannabis plant. “You want to get as much THC as you can, so that it works better. That can be different from person to person.”
Like every medical treatment, some patients with chronic pain respond well to CBD-rich products and others do not.

“I think it depends on the types of pain you have,” Sexton said. “Any type of pain that seems to be neuropathic seems to respond.”

Anecdotally, the best ways to use CBD-rich products seem to be sublingually (placing drops of the oil under the tongue) or through inhalation (vaping is preferable to smoking). But there are topical and edible products available as well. (I have a friend who uses CBD-rich lotion for neuropathic leg pain from fibromyalgia and says it gives her relief when nothing else has.)

For those who live in states where marijuana is legal, almost any dispensary carries CBD-rich cannabis products these days. The package should indicate the ratio of CBD to THC to make selection easier. (Dispensary employees are typically very knowledgeable about their products and can help guide in decision-making.)

But is it legal …

For people who live in states where marijuana is not legal, procuring CBD-rich products becomes much more complicated. Some legal states allow out-of-state residents to purchase products at dispensaries, so that’s an option for some.

And then there’s the giant quagmire of the hemp CBD oil industry. Anyone who’s researched CBD has probably come across websites that sell hemp CBD oil and profess their product is “legal in all 50 states.”

The truth is it’s not, according to the U.S. Drug Enforcement Administration and every CBD expert that’s been interviewed for this story (and others that I’ve written).

Hemp is derived from the cannabis plant. Cannabis is listed as a schedule I drug in the United States, so hemp CBD is illegal, according to the federal government.

But if that’s true, why aren’t the feds cracking down on illegal online hemp oil sales? Well, the answer depends on who is asked. There are probably a variety of factors, including the fact that, as illegal drugs go, cannabis products are pretty safe. There’s never been a fatal overdose, and the potential for addiction is pretty low (about 15 percent). With heroin and opioid addiction sweeping across the nation, chances are good that the DEA has bigger issues to handle.

But before clicking off of this story to buy a bottle of hemp CBD online, please read this caution: The hemp CBD industry is completely unregulated, and it’s a situation of buyer beware for several reasons.

First, the U.S. Food and Drug Administration tested several brands of hemp CBD oil earlier this year and found that many contain little or no CBD. So, buyers may not be getting what they’re paying for. (And this is a big issue since CBD oil is not cheap!)

Second, the hemp plant is classified as a bio-accumulator, meaning it likes to suck up toxins from the soil in which it’s grown. In fact, hemp was planted near Chernobyl to help with radiation cleanup. Since hemp CBD is unregulated, there’s no way to know under what conditions the plant was grown – if it was exposed to harmful pesticides, environmental toxins or chemicals. Conceivably, consumers could be unknowingly poisoning themselves if they choose the wrong CBD product.

“There’s no easy solution,” Marcu admitted. “A lot of patients I know have basically been criminalized for using their medicine.”

A new era may be coming …

The FDA is currently reviewing all of the medical literature pertaining to the medicinal use of marijuana. It could recommend the rescheduling or descheduling of marijuana, opening the door for research and better access. Congress or President Obama (through executive order) could also make that decision.

One thing is certain: Americans’ views about marijuana are shifting – rapidly – and it’s likely we will see some form of federal legalization in our lifetime, finally giving us easier access to products that may help us.

Visit Project CBD for more information on CBD and its uses and benefits. I previously shared my own experience using CBD oil for fibromyalgia in this blog post. 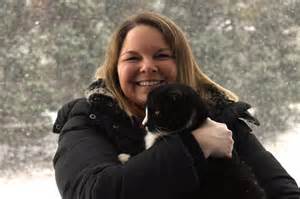 [/fright]Donna Gregory Burch was diagnosed with fibromyalgia in 2014 after several years of unexplained pain, fatigue and other symptoms. She covers news, treatments, research and practical tips for living better with fibromyalgia on her blog, FedUpwithFatigue.com.

Donna is an award-winning journalist whose work has appeared online and in newspapers and magazines throughout Virginia, Delaware and Pennsylvania. She lives in Delaware with her husband and their many fur babies.
Reactions: KweenPita and Katie

I think you did a great job covering this extensive, illegal(in most places), and not giving medical advice. That's the clincher when you talk to people like us about a treatment, though benign, it's unorthodox and illegal. So we can only go on what we know thus far. Whether DEA, Congress, or States want to recognize it, yes marijuana is more effective in pain relief than opiates, because it's stress relief, muscle relaxation, neuralgia pain relief, migraine relief and pain relief. Yes there is some down time with a euphoric feeling. Lie down, read a positive book, pray, meditate, take some you time. Opiates modify our moods, also. We shouldn't operate machinery or drive under the influence of opiates. This subject is a thesis. My goodness all because someone might take a puff too many enjoy themselves and giggle! Someone call the Joy Gestapo, someone might crack a smile!
I imagine that it's difficult to write an informative article about how to experiment with marijuana, since it's illegal in most of the US. But the title grabbed my attention, and I was hopeful.

The how-to information is 'needs more research.' I clicked on Project CBD, and it lists dispensaries that pay a fee to be on the website, but whose products are not vetted.

I gave this 2 stars because the advice to start at a high CBD: THC ratio and then increase THC is interesting. Although it's confounded by the statement shortly after that "You want to get as much THC as you can...." There's no discussion about how we could do this.
Great coverage on MM. I do take nabilone (cesamet) a cannibinoid, but am curious to know how a combo with THC would work but scared to try as the MM shops here (BC) are also not regulated.
Read more…