Overview Discussion
A diagnosis is made using a combination of symptoms, test and treatment results 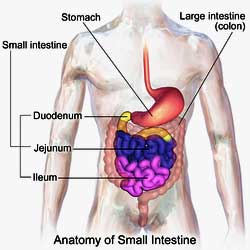 [/fright]There is no perfect test for SIBO. The problem is the small intestine; it's too far down the gut for an endoscopy and too far from the other end for a colonoscopy to be fully effective. A full 17 feet of gut is essentially inaccessible by these tools.

Unfortunately, there is no gold standard for SIBO - no agreed upon criteria - and different doctors will interpret the test results differently. A consensus of experts, however, did publish their recommendations in 2017.

In the end the most effective way to establish whether SIBO is present may be simply to treat it and observe the results.

After being on a specific diet for a day or two and after a 12 hour fast patients drink a sugar (lactulose or glucose) solution. The hydrogen sulfide and methane gases that bacteria produce are then measured in their breath every 15 minutes over three hours or so.

The test may only pick up 60% of those with SIBO, however. Lactulose is better at diagnosing SIBO when bacterial overgrowth is present in middle or last part of small intestine while glucose is better at picking up SIBO in the first part. Dr. Siebecker reports she's gotten good results with the lactulose test.

Dr. Siebecker writes that the Anti Vinculin and CDT B Antibody test measures antibodies against a bacterial toxin and protein which shows up after food poisoning sparks an autoimmune response.

A positive result indicates that gut motility problems are present which have been unable to clear the bacteria out. Breath tests are then recommended.