Their main finding, however, has been that people with ME/CFS have high levels of reactive oxygen molecules, which can harm blood vessels and muscles. These molecules are formed in the body during biological processes that use oxygen, such as exercise. In healthy people they are counter-balanced by antioxidants that detoxify the oxygen molecules to prevent damage, but sometimes an imbalance can lead to increased ‘oxidative stress’ and an increased risk of cardiovascular disease. 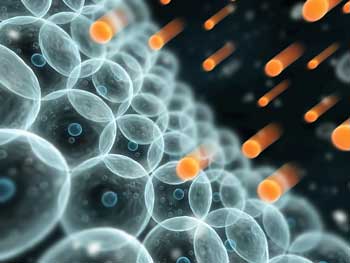 It is important to discover the origin of these molecules, so that ways of counteracting oxidative stress-related cardiovascular damage can be developed. For this reason, the research team in Dundee has received funding from ME Research UK to investigate the role of ‘nuclear factor erythroid-derived 2’ (Nrf2). This is an extremely important regulatory protein in the body, and is now believed to be a master activator of the body’s natural defence against oxidative stress. When reactive oxygen species are generated, Nrf2 is activated, stimulating the body’s antioxidant pathways and thereby providing a buffer against oxidative stress.

The researchers’ aim is to test whether Nrf2 activity is low (in quantity and in gene expression) in blood samples from ME/CFS patients, and whether Nrf2 levels are related to levels of oxidative stress. Importantly, the team will also examine whether the Nrf2 antioxidant system of ME/CFS patients can be activated by certain foodstuffs and by some therapeutic drugs. At present, several drugs that stimulate the Nrf2 pathway are being assessed as treatments for other diseases, including multiple sclerosis in which oxidative stress is involved, but this is the first time ME/CFS patients have been studied.

During the 18-month study, blood samples will be taken from 40 ME/CFS patients in the unit headed by Professor Julia Newton in Newcastle, and from age and sex-matched control subjects recruited from the general population. A range of assays will be undertaken in the laboratories at the University of Dundee, including for oxidative stress and Nrf2 protein levels (by Western blotting), and for the expression of Nrf2-target genes (by real-time PCR). An important part of the experiment is to examine whether Nrf2 target genes can be induced in white blood cells by dietary components and/or therapeutic drugs, and whether oxidative stress is affected. Accordingly, the researchers will treat white blood cells from patients and controls with various doses of dietary compounds that activate Nrf2, and with some therapeutic agents.

If low Nrf2 levels are found to play a central role in the increased oxidative stress found in ME/CFS patients, stimulation of Nrf2 could become an important treatment strategy, as there are currently no specifically effective treatments for the illness. The findings may also have broader implications for studies of Nrf2-targetted treatments in other conditions characterised by elevated oxidative stress, such as cancer, diabetes and liver disease.
Click to expand...