Once again, vaccine research and ME/CFS are being discussed together in scientific articles and among scientists. Someone who I consider to be a whistleblower published several articles and opinion pieces in journals under a fake name, Lars Andersson (who claimed to be a Swedish scientist but that's not true and his/her identity is still unknown). Now some of the articles have been retracted, and others are planned to be retracted.

This is a comment in the Indian Journal of Medical Ethics attributed to "Lars Andersson":

And this is an excerpt that immediately rang bells for me:

[article=http://ijme.in/wp-content/uploads/2018/04/RETRACTED_increased_incidence.pdf]The increase in premalignant cell changes in non-naïve
individuals, as suggested by the FDA, is consistent with the
knowledge that vaccination can cause reactivation of both
target and non-target viruses (6–12). For Gardasil, the HPV
types 16 and 18 are called target HPVs since the vaccine
contains antigens for these two HPV types. Other HPV types
for which the vaccine does not contain any antigens are called
non-target HPVs. For individuals exposed to Gardasil, evidence
of a selective and significant reactivation of the oncogenic
non-target HPV types 52 and 56 was reported in the genital
tract for all women (13).[/article]

This scenario of reactivation of viruses triggered by targeted vaccines really made me pay attention. But ME/CFS is directly mentioned in other articles. 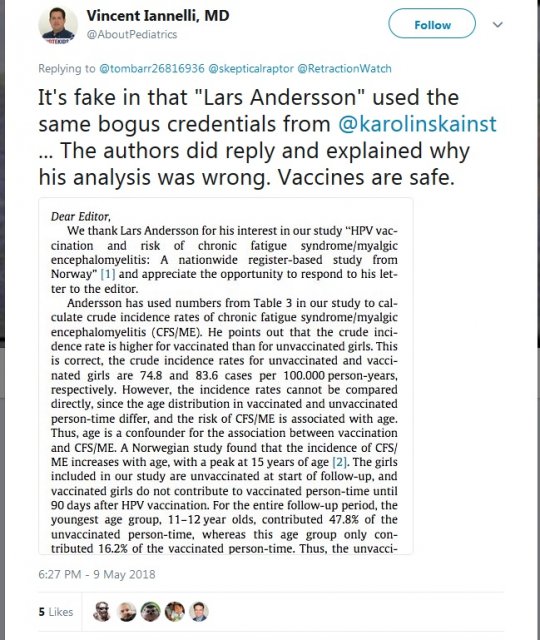 There is more analysis on a biased blog that basically beats the drum of the vaccines are safe camp. But we're used to that sort of thing in this community.. Not all the analysis discusses ME/CFS, but some of the articles do, or related subjects around virus reactivation. https://sciblogs.co.nz/code-for-life/2018/05/11/faking-an-hpv-vaccine-claim-in-more-ways-than-one/

It's like that guy doesn't see his own bias. I mean, "Amazingly, the journal acknowledges the author faked his name, but has decided it is OK for him to continue with it."

That's not true. the journal said it's not ok to lie, but if someone is worried about the repercussions of publishing, they allow publishing anonymously and withhold the identity of the author. I don't know if there is precedent in that journal for anything published anonymously, but this distortion is telling of the bias of the blog article's author. Among other distortions: "Three are at the lowly Journal of Internal Medicine, one at the reputable Vaccine."

The real issue here is the polarized debate and how it leads to misuse of retraction to silence ideas and ruin careers. If "Lars" wasn't scared in the first place, and if scientific debate was centered on fact finding, not image management, then maybe his concerns would've been just looked at and dismissed or validated on the merits. But now it's going to look (once again... I'm looking at you, XMRV) that a silencing of science is underway.

In my best guess, this "Lars" person is someone part of a team hired by a corporation to study effects of HPV vaccines. I'm guessing he might be hiding his identity because he published material that isn't his to publish due to contractual agreements. I think this is a whistleblower who wants more transparency in science. Other authors have pointed out that corporations often hire other companies under contract to run studies. Studies that aren't published if the results are negative.

If this person was hired this way, and his conscience was bothered enough to come up with this scheme, and if he's in another country, how would he trigger an investigation in the US about something done under contract in, let's guess... India? I'm betting this is someone with a child who was affected and possibly died. I think we need to look at the person's motivations. Why would he do that? What does he have to gain other than vengeance or a clear conscience?

@Not dead yet!
Very interesting - great article. If we look back in history we can find all kinds of nefarious secret experimentation on humans - with denial and secrecy as part of the deal: Tuskegee, Operation Midnight Climax, Operation Sea Spray, exposure of unsuspecting WW 2 troops to poisonous gases ( here in the U.S.), and more. So once there is one lie, trust is hard to find.

And on the issue of vaccines, I have some direct experience. My little grandson got the Rotavirus vaccine at 2 months, 4 months, 6 months, 2013. After the 4 month vaccine, he screamed for 2 days and did not poop for 23 days - all breast fed. I went crazy, tried to file a report, but we could not get the batch number or cooperation of the pediatrician - who said this was perfectly normal - he was absorbing all the breast milk and did not need poop. Absolutely ridiculous.

Later I learned that this vaccine had been pulled by the FDA about 2010 as pig Circovirus DNA had been found in it. Well, the FDA later determined that this was not a problem and re-released the vaccine. Pig Circovirus causes severe immune deficiency and death in baby pigs.

Vaccines are a multi billion dollar industry. God, this stuff makes me crazy.