Additional information about the protest:

Canadian TV coverage of the event:

16 hours ago | By Simone Joseph 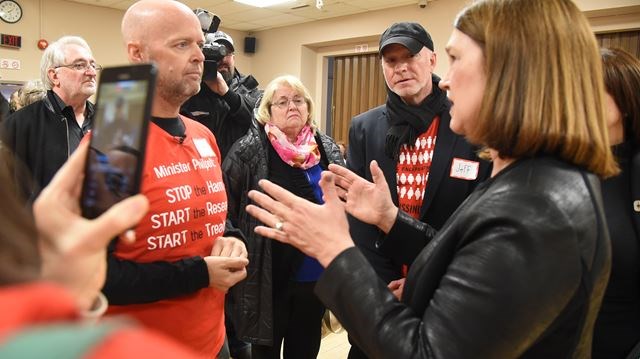 Scott Simpson, one of the protesters, suffers from ME (Myalgic Encephaloigmyelitis), otherwise known as chronic fatigue syndrome.

He and fellow protesters wanted Philpott to commit to making an announcement declaring ME a biological disease, not psychosomatic as some people describe it. He was also hoping Philpott would declare a national strategy on dealing with the disease.


But when Simpson and Philpott spoke, the minister pointed out people like Simpson approach her every week about different diseases and she can’t make announcements about them all.
“Almost every week, I have a different group of advocates that come to me speaking about specific syndromes, or disease conditions or health issues asking for a national strategy,” Philpott told Simpson, adding she is not convinced that a national strategy for every specific medical condition is helpful.

Philpott had planned a meet and greet at the Markham Veterans Association building Jan. 14 , an event which was somewhat upset by protesters in their red t-shirts and placards.

Simpson is part of a group called #MillionsMissing, a mission calling for action to equitably fund bio-medical research on ME/CFS–a disease that “leaves #MillionsMissing worldwide from their careers, schools, social lives and families”.

Simpson asked Philpott for a specific announcement pointing out that the illness is biological.
“I would have liked to see her make a confident commitment saying to the public that ME is biological not a psychological disease. I’m disappointed that she didn’t make that commitment, “ he said.

If he and other advocates could get the research funding needed and access to treatment, Simpson would have been content.

Simpson joined others at the event to protest lack of funding and understanding of ME.
Simpson has ME as well as HIV.

Jeff Smith of Toronto has had ME for 20 years and was also part of the protest.
Last year, he got the resources together to go to California where there’s a clinic for chronic fatigue.

Smith saw the sign for the clinic and broke down.

He received a diagnosis at the clinic.

“Even though everyone here says here you probably have it, doctors here say we don’t know anything about it, we can’t treat it. There’s nothing we can do for you. “

At the U.S. clinic, they identified two serious viruses in his system that should have been identified 20 years ago, Smith said. Since then, he has been taking anti-virals.

In the end, Philpott listened to Simpson and promised him more listening time at the end of the meet and greet.

This guy knows how to make news! That's what we need
S


A BRILLIANT team effort by all! Scott, I just watched the CTV news clip and saw you stand on the chair. Wow! Charisma and chutzpah.