Ivermectin, an anti parasite med hailed as a wonder drug when discovered years ago, is a cheap generic med finally authorized last week by NIH as a first line Covid treatment, after letting a few hundred thousand citizens die for Big Pharma profits. To the point for us, has anyone tried it for fibromyalgia? It has a very low risk profile, is cheap, and readily available. My adult son, recently cured of his second Covid bout with ivermectin, had symptoms scarily similar to both ME and fibro. Ok, maybe they are an end point for a different infectious process. But maybe not...virus/bacteria/etc. as a cause of our disorders has been up for grabs for decades. I have some apple flavored ivermectin horse parasite paste, oddly FDA approved, but am saving it for Covid as I’m not getting the vaccine, a Phase III test of 100 million people IMO. I’m trying to get a doc to prescribe me tablets instead of waiting for sketchy overseas stuff for months. I’d be interested in any thoughts or experiences with this med for us.
J

Beneficial for Fibro? I believe Fibro is not parasitic, more muscle issues. Maybe it could help ME/CFS but who knows...

In all the years of the Fibro dx I've gotten I've read so much about the thyroid fibro connection, if thyroid is not optimal fibro will hit us more. Many take the wrong thyroid med or the wrong dose and are not getting optimal support.

I deal with more OA than Fibro, but it's all mixed in.
S

Fibro is more HPT issues causing central sensitization and problems with nociceptive pain as I read it. But what causes the HPT issues...virus, bacteria, ? Ivermectin won’t kill anyone, worth a few days trial for me for fibro if I can obtain without waiting for India shipment.
J

Well, I'm told if one gets in touch with AmericasFrontLine doctors site, you can get help with the drugs you way want to try.

Do some searching around here and maybe something will come to you.
S

Thanks. I have someone working on it but I’ll keep them in mind. After 30 years I’m afraid I’ve gone down dozens of rabbit holes.
P

There is one small study that showed Covid Long Haulers greatly benefitted from Ivermectin use. It has crossed my mind : would Ivermectin help with my ME? After all it developed after a bout of Swine Flu.
I would be fascinated to hear if your fibro improves after taking Ivermectin. 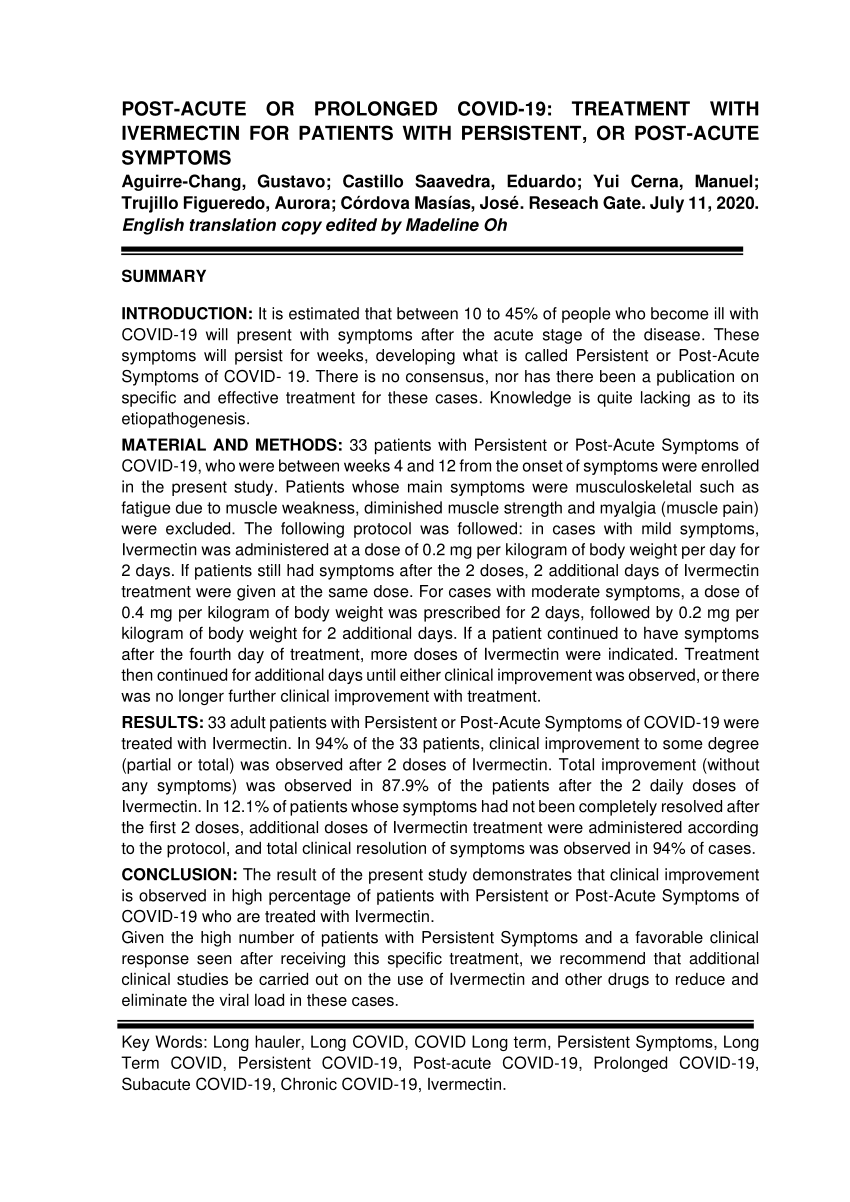 PDF | SUMMARY . INTRODUCTION: It is estimated that between 10 to 45% of people who become ill with COVID-19 will present with symptoms after the acute... | Find, read and cite all the research you need on ResearchGate

A summary from this small study is below. It surely warrants much bigger studies to assess the efficacy of Ivermectin for Long Haulers:

POST-ACUTE OR PROLONGED COVID-19: TREATMENT WITH IVERMECTIN FOR PATIENTS WITH PERSISTENT, OR POST-ACUTE SYMPTOMS Aguirre-Chang, Gustavo; Castillo Saavedra, Eduardo; Yui Cerna, Manuel; Trujillo Figueredo, Aurora; Córdova Masías, José. Reseach Gate. July 11, 2020. English translation copy edited by Madeline Oh SUMMARY INTRODUCTION: It is estimated that between 10 to 45% of people who become ill with COVID-19 will present with symptoms after the acute stage of the disease. These symptoms will persist for weeks, developing what is called Persistent or Post-Acute Symptoms of COVID- 19. There is no consensus, nor has there been a publication on specific and effective treatment for these cases. Knowledge is quite lacking as to its etiopathogenesis. MATERIAL AND METHODS: 33 patients with Persistent or Post-Acute Symptoms of COVID-19, who were between weeks 4 and 12 from the onset of symptoms were enrolled in the present study. Patients whose main symptoms were musculoskeletal such as fatigue due to muscle weakness, diminished muscle strength and myalgia (muscle pain) were excluded. The following protocol was followed: in cases with mild symptoms, Ivermectin was administered at a dose of 0.2 mg per kilogram of body weight per day for 2 days. If patients still had symptoms after the 2 doses, 2 additional days of Ivermectin treatment were given at the same dose. For cases with moderate symptoms, a dose of 0.4 mg per kilogram of body weight was prescribed for 2 days, followed by 0.2 mg per kilogram of body weight for 2 additional days. If a patient continued to have symptoms after the fourth day of treatment, more doses of Ivermectin were indicated. Treatment then continued for additional days until either clinical improvement was observed, or there was no longer further clinical improvement with treatment. RESULTS: 33 adult patients with Persistent or Post-Acute Symptoms of COVID-19 were treated with Ivermectin. In 94% of the 33 patients, clinical improvement to some degree (partial or total) was observed after 2 doses of Ivermectin. Total improvement (without any symptoms) was observed in 87.9% of the patients after the 2 daily doses of Ivermectin. In 12.1% of patients whose symptoms had not been completely resolved after the first 2 doses, additional doses of Ivermectin treatment were administered according to the protocol, and total clinical resolution of symptoms was observed in 94% of cases. CONCLUSION: The result of the present study demonstrates that clinical improvement is observed in high percentage of patients with Persistent or Post-Acute Symptoms of COVID-19 who are treated with Ivermectin. Given the high number of patients with Persistent Symptoms and a favorable clinical response seen after receiving this specific treatment, we recommend that additional clinical studies be carried out on the use of Ivermectin and other drugs to reduce and eliminate the viral load in these cases
S

I have Ivermectin on the way and will do a trial for a few days for fibro pain. It seems possible to me that covid affects the same HPT axis and messes up the cytokine response the same way as ME and FM. I have the Ivermectin horse paste which is being used everywhere for covid prophylaxis and treatment but...jeez, if I can try pills, why not. I got the paste before I knew could get pills, incidentally, from my son, an immune compromised guy who barely got over first covid illness, was on the way to becoming a long hauler with continuing symptoms, got covid a second time in
Brazil, got his doc to try Ivermectin. One day later...90% better. Went on five day protocol. Doctor was impressed and gave it to four other covid patients, each got better the next day. Looks like our so-called leaders in government and medicine have let thousands of their fellow citizens die for Big Pharma. I will definitely report back results.
J

Steve, hope your pills are for Human consumption. It's being sold at Amazon pharmacy if a prime customer, and price is sky high. Where did you get yours if you don't mind saying.

And around here I'm hearing docs are not prescribing it, they are being brainwashed as usual for the vaccines, which I will not take, that is certain.
S

My son’s doctor gave him a scrip and he filled it a local pharmacy and is sending me some. All of the pharmacies in his area of FL are now out;people aren’t dumb. I have virtual yearly appt. with my pcp next week and will ask him for a scrip to see what he says, probably no. My Durvet Ivermectin horse paste, from Amazon, a good investment LOL as it is now more expensive, is FDA approved! I wouldn’t hesitate to use it. I personally know half a dozen people using it, only need small amounts based on weight. Easy to dose. They put it on crackers.

Now the CNN talking heads are saying new variants will only be partially attenuated and less if they run out of doses and give second doses to new people. Not only is this a scam that is costing lives, it’s a poorly run scam. We’ll never know who, how, and why this appeared but since China is the only economy doing great now...my math in school always said two plus two = 4. Or as the Romans said cui bono? I think everyone should hit the pet stores and get the paste if they can’t get pills just in case the bozos running the vaccine fall way behind, if the vaccine is the route they are going to take. Looked liked some ME or FM were damaged by the vaccine.

At the FL ER all they could do as they watched my son the first day as his cardiac rate went down to 30 was give a steroid shot and a lot of diagnostic stuff looking at heart, lungs, brain, etc. I suspect brain would really need what we need, f(mri). I’ve been trying to get a scrip for that for years, would even pay, but no one will do it. I’d like to see where I assume my brain has been damaged by fibro. Jared Younger uses it for his research. I didn’t know about son’s infection until several days later or I would have couriered down horse paste.
S

I decided to keep my Ivermectin tablets for emergency and used the horse paste for a trial of it for my decades long severe fibro pain. I took .7 ml for six days, actually one day more than the recommended curative dosage for Covid. It does not taste good. Unfortunately, it had no effect on my severe fibro pain. Would it help for ME symptoms, somewhat overlapping but different from fibro? If you can get a tube of paste from a local agricultural supply, pet, or tractor place, it's probably worth a try. It's a very safe med used millions of times in Africa for awful parasite infections. Also would be good emergency or prophylactic for Covid at much less frequent dosing.

This is pretty disappointing but as I read that Ivermectin does not cross the blood brain barrier it seemed less likely that it would help fibro, according to the fibro pathology to which I subscribe essentially, brain damage.

That is bad news as I have no more pain treatments to try. A month ago I saw my fifth pain management guy, very competent dude who went to the same school I did. He was up on fibro supplement treatments, suggesting the ones I had already taken. His final report said, unfortunately, just monitor my BP, no fibro recos. That's where we are.

I have two crowd sourced what I call several brain zappers arriving in several months. One helps you oxygenate your prefrontal lobe with targeted biofeedback, probably useless for fibro but a drowning man grabs at anything. The other is more interesting, helping you achieve lucid dreaming and probably control the brain wave state you are in easier than with other devices. Maybe I can learn how to wander around in an alpha state. I find my mood has become pretty bad as the number of potential treatments has pretty much vanished. Hope for an untried supplement or gadget has kept me going for the last 30 years but it's become a lot harder. The pain is always increasing and ever present. The light at then end of the tunnel is probably an incinerator and ash container when you work up the nerve.
J

I don't have any Ivermectin but would not take it for pain. I have my stuff to manage it all and I'm probably never out of some pain while awake, sleep is good as no pain. Have you ever worked with MSM and I've taking it for years, twice a day in water, 1 large tsp each time...I take other stuff too. But not the Ivermectin for pain. Good luck.
You must log in or register to reply here.
Share:
Facebook Twitter Reddit Pinterest Tumblr WhatsApp Email Link