In our opinion, sedative antidepressants are a valuable treatment option for insomnia in a situation in which, despite being in CBT-I therapy, the patient still requires sleep-promoting drugs more than 3–4 times per week. Effects of Antidepressants on Sleep

a tricyclic antidepressant (TCA). Two types of TCA’s exist: sedating and activating TCA’s. Sedating TCAs such as Doxepin and amitriptyline (Elavil) have antihistamine effects and reduce serotonin and norepinephrine transport. Activating TCAs such as imipramine and desipramine and other antidepressants can worsen sleep. TCAs are the first drugs mentioned in the sleep section of the IACFS/ME Treatment Primer sleep section.

Doxepin elixir also appears able to tamp down the hyperarousal that may be interrupting slow-wave sleep, in particular, in people with ME/CFS/FM. 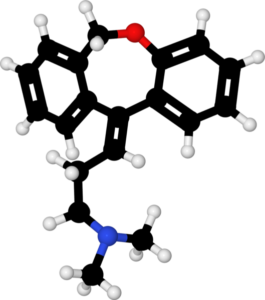 Doxepin, the only antidepressant approved (in very low doses) for sleep is a favorite among ME/CFS doctors

Dr. Cheney called Doxepin one of the most potent anti-histamines known to man and an effective immunomodulator. Cheney believed Doxepin’s effectiveness at calming the nervous system down was particularly helpful in chronic fatigue syndrome (ME/CFS). (Cheney once facetiously said he wished he could just put people with ME/CFS into a coma state for a while).

Dr. Klimas prefers older drugs like Benadryl and low doses of TCA’s like Doxepin over the newer valium derivative type drugs like Restoril and Klonopin and to some extent Ambien. While these drugs may get an ME/CFS patient to sleep, she believes they “steal slow-wave” or deep sleep and make the non-restorative sleep worse.

Dr. Lapp likes to try herbs like Valerian root first, but it those don’t work, his next step is to use Klonopin and Doxepin in very, very low doses.  Because they block serotonin and norepinephrine transporters, they may also increase the levels of those neurotransmitters and increase energy levels a bit.

Doxepin was also the first sleep drug and one of the top 20 drugs Dr. Goldstein recommended for ME/CFS.

A 2017 review “The effects of antidepressants for sleep” recommended that Doxepin start as low as 3 to 6 mg (or 25–50 mg for trazodone). It stated that “Many psychiatrists are astonished that a sedative antidepressant can promote sleep in such a low dose”.  It also reported that these sedative antidepressants should be taken much earlier than hypnotic sleep drugs (at least 2 hours before sleep) to reach their maximum potency by bedtime.

Dr. Lapp and Dr. Cheney had slightly higher recommendations (10 mgs of Doxepin  – about 1/15th of the normal dose for depression). Cheney recommended starting low (two drops a night) as too high a dose can cause fatigue and brain fog.  Cheney gradually increased the dose until brain fog showed up.