Chronic fatigue syndrome is a terrible name. It’s such a terrible name that you have to give the people around you a little break. With that name, they’re almost doomed, at least at first, to think ME/CFS is a milquetoast kind of disease best suited to the malingerers and weak-minded among us.

We simply need to destroy that mindset, and thankfully there are a number of ways to do that.  Below are ten ways plus a bonus at the end to help you prove ME/CFS is not just depression. More suggestions are welcome. (This is an update of an earlier blog on this subject.)

(Health Rising uses the name chronic fatigue syndrome in its article titles begrudgingly because it has such a high search value. It uses it in the first couple of paragraphs sparingly and then drops it altogether in favor of ME/CFS).

“I can tell you without hesitation, chronic fatigue syndrome is much worse than HIV.” HIV/AIDS Patient​

Have them read a Huffington Post piece written by a person with an aggressive form of HIV/AIDS taking care of his partner with ME/CFS. Despite having a particularly scary form of HIV, he was more worried about his partner.

You see, Franky has lived the majority of his life with a little-understood chronic illness, which relapses and fluctuates without warning. This illness is ME/CFS (myalgic encephalomyelitis/chronic fatigue syndrome) and it is often referred to as the great “invisible disease” of our time.

After his ear surgery, Franky’s illness kicked in with the force of a dragon’s venom. He had violent thrashing vertigo and seizures, along with bone-crushing pain that spread up and down his every fiber. He could not move without assistance. I had to spoon-feed him and bathe him. As a person living with HIV, watching the daily suffering of my partner who has chronic fatigue syndrome, I can tell you without hesitation, chronic fatigue syndrome is much worse than HIV. It’s unfathomable that his disease is even named something as belittling and dismissive as chronic fatigue syndrome.

Take it from Scott; a former triathlete with HIV/AIDS and ME/CFS:

As someone who has been HIV+ for 17 years I can testify that the M.E. I’ve been dealing with since Aug 2012 has had a far greater negative physical impact on my health and body than HIV. I’m also a passionate triathlete, having competed at the world age group champs 3 times – since my latest M.E. relapse almost 8 months ago, I’ve not been able to swim, bike, run. HIV has never debilitated me to even a fraction of M.E.

HIV #II: Hear it from an HIV/AIDS and ME/CFS Doctor

If they still have a “yah but” or are still skeptical

– refer them to Dr. Klimas’s famous statement from a question and answer session with the New York Times:

I hope you are not saying that C.F.S. patients are not as ill as H.I.V. patients. My H.I.V. patients for the most part are hale and hearty thanks to three decades of intense and excellent research and billions of dollars invested. Many of my C.F.S. patients, on the other hand, are terribly ill and unable to work or participate in the care of their families.

They’re mumbling that HIV/AIDS is quite treatable? I think they would agree that multiple sclerosis (MS) is not. Wouldn’t they, like anyone, quail at the idea of having MS?

Hit them with a study showing that multiple sclerosis patients were twice as functional, experienced considerably less pain and had greatly increased vitality compared to people with ME/CFS… All this in a disease known for the high rates of fatigue it produces.

If they think you’re still kicking back and cooling your heels in bed,

tell them about a study which found that the quality of life of people (QOL) with ME/CFS is not just worse but considerably worse than that of people with a wide range of serious diseases including heart disease and cancer. 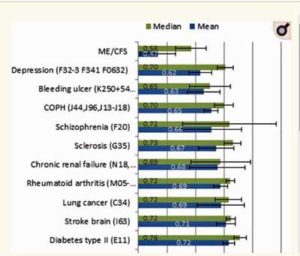 OK, you’ve got a tough case. Time to roll up your sleeves and get serious.

Show them the results of an eye-opening study which found that ME/CFS patients scored “significantly lower than patients in all the disease comparison groups…. on virtually all the scales.” Those disease groups included congestive heart failure, type II diabetes melitus, acute myocardial infarction and multiple sclerosis. Surely that will do it.

Consider that their brain-fog is probably considerably worse than yours and that they may need professional help, but hope springs eternal. Some people need dollar figures to get it.  Have them check out this Centers For Disease Control (CDC) study which showed that the economic losses caused by ME/CFS in the state of Georgia are over a $1 billion a year.

That didn’t work? Remind yourself that patience is a virtue and try one more study. Surely the fact that about 25% of people with this disease are too sick to leave their homes, only 20% are working part-time, and a measly 10% are working full-time will make a mark…

(7) Have Them Read Whitney Dafoe’s Story

Scientific studies not doing it for them? No sweat. Let’s get really personal – scary personal.

Have them read about how a once healthy young man with a bright future is now being fed by a feeding tube in a darkened room.

Have them read Whitney Dafoe’s story and then tell them to pray that something like that never happens to a member of their family.

Bonus opportunity – have them watch some ME/CFS stories from the newspaper which featured Whitney’s story.

(8) Have Them Watch Unrest

So they’re into action thrillers. Give yourself the medal of honor for hanging in this long. (They must be a close family member, huh?)  Ask them if they can possibly stay engaged for 17 minutes? Tell them to watch Jen Brea’s Ted Talk on ME/CFS. Tell them it’s been watched almost 2 million times.

(10) The Nuclear Option: The ME/CFS and FM Symptom Thread

That didn’t work? Pray for them, they need help. Promise them that the agony (for you and them) is almost over, and then go to the nuclear option: the symptom description thread

. This option is not recommended for children, the fragile or people prone to depression. They may never look at you the same again but they will get a good sense of what ME/CFS and/or FM can be like.

There’s a very good chance that this person thinks you’re just depressed. If they or anyone else thinks that, refer them to the blog below, which indicates that the symptoms of depression are radically different from those of ME/CFS.