Wrong diagnoses hurt. They lead doctors to prescribe treatments that don’t work and may even be harmful (exercise!) and they keep doctors from prescribing treatments that do work.  They waste patients’ money and, given the fact that the earlier a person is diagnosed with ME/CFS the better chance they have of improving their health, they contribute to poor health. I was lucky.  (Of course my primary provider still didn’t have a clue about ME/CFS, but at least he wasn’t prescribing me with antidepressants and exercise.)

Fortunately, Dr. Lenny Jason has come up with a way to convince your doctor that you’re not simply depressed.  But first, a little history.

The most commonly used definition for ME/CFS, the Fukuda definition, has contributed to the problem. A doctor looking at the symptomatic criteria for major depression and the Fukuda criteria could find them quite similar and be inclined to conclude that you’re just depressed. Or doctors could conclude that some people with depression actually have ME/CFS. (Avoiding that is one reason  Lenny Jason, a psychologist, argues for using standardized psychiatric interviews.)

Symptom overlaps between the two diseases include fatigue, problems sleeping, feeling lethargic and difficulty thinking or concentrating.  Symptoms more associated with depression include feelings of worthlessness/guilt, diminished interest or pleasure in everyday activities, recurring thoughts of death or suicide. Natelson’s 1995 study found that people with ME/CFS tended to have more physical and fatigue symptoms and fewer mood symptoms on the Beck Depression Inventory (BDI) than people with major depression.

Jason’s 2005 finding agreed with that conclusion. It found that including activity levels or other symptoms not found in the Fukuda criteria (muscle weakness, need to nap each day, frequently losing train of thought, difficulty finding the right word, confusion–disorientation, hot and cold spells, etc. ) allowed him to successfully differentiate between the two illnesses. Adding symptom severity (instead of simply symptom presence) to the Fukuda criteria also helped to differentiate the two illnesses.

Then in 2006 Jason more or less ended the discussion by combining the results of those two studies to come up with a set of symptoms that could definitively  differentiate between ME/CFS and depression.

People with ME/CFS have much more 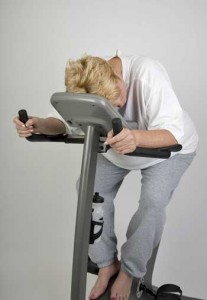 The degree of post-exertional malaise experienced was a major discriminator between ME/CFS and depression.

Severe PEM is common in ME/CFS but not in depression. Jason’s analysis indicated that the PEM experienced in depression is more similar to that found in healthy people than that experienced by people with ME/CFS.

The four symptoms identified in Jason’s study – fatigue, post-exertional malaise, unrefreshing sleep, and cognitive problems – are considered to be the four hallmark symptoms of ME/CFS.

If your doctor thinks you’re simply depressed, you might want to point out that studies indicate people with depression don’t  experience much post-exertional malaise or  unrefreshing sleep or have the cognitive problems found in ME/CFS. They also don’t spend nearly as much time fatigued, and they typically have a lot more self-reproach.

So you’re fatigued much of the time, can’t exercise without symptoms, wake up feeling like a leaden lump no matter how much sleep you get, feel confused and disoriented a lot, and aren’t into beating yourself up a lot, you have chronic fatigue syndrome (ME/CFS) – not depression.

You may be depressed but if you are your diagnosis should include chronic fatigue syndrome (ME/CFS) as well.

Dr. Kristina Downing-Orr, a clinical and research psychologist who developed chronic fatigue syndrome (ME/CFS) is well acquainted with both conditions. She reports that

ME/CFS is Not a Somatization Disorder

Ending the Somatization Myth in ME/CFS (or “Who’s the Deluded One Now”?)