Stimulating the Central Nervous System For More Energy, Alertness and Even Calmness (?) in ME/CFS and FM 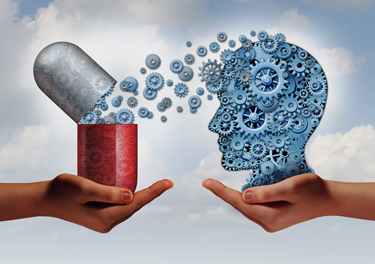 Most of the pharmaceuticals used to increase energy in chronic fatigue syndrome (ME/CFS)  (Vyvanse, Ritalin, Adderall) are amphetamines or have amphetamine-like structures. Amphetamines have been used in the past to elevate mood, reduce feelings of fatigue and increase alertness, concentration and motivation.

The cardiovascular effects have led them, at times, to be used in orthostatic intolerance as well.  In general, they constrict the blood vessels and increase blood pressure and heart rates.  They may also increase blood glucose levels.

Historically, amphetamines were used to treat everything from asthma to obesity to hyperactivity to neurological disorders, but abuse problems have restricted their use today to conditions such as attention deficit disorder.  When taken correctly the risk of addiction is reportedly very low but taking large doses of stimulants over a long period of time can cause addiction. Sleep and energy levels can be negatively affected in ME/CFS and FM as well.

in chronic fatigue syndrome (ME/CFS) and fibromyalgia because they increase alertness, concentration, motivation, and energy and can assist with circulatory problems.  One study suggests they may be able to help with fatigue and pain as well.

Plus, the disorder stimulants are most commonly used in – attention hyperactivity deficit disorder (ADHD) – appears to be common in fibromyalgia and probably ME/CFS. One study which employed an ADHD self-test found that almost 50% of FM patients tested positive for ADHD.

One small placebo-controlled, double-blinded ME/CFS study found that Vyvanse, a next-generation amphetamine, not only improved cognition but fatigue and pain, as well. The Synergy trial which incorporated methylphenidate/Ritalin with a nutrient formula containing mitochondrial and immune boosters would have been successful were it not for the high placebo response found.  A long-term assessment of Ritalin in ME/CFS found that about a third of patients received significant benefits including a 50% improvement in fatigue and concentration.

A 2010 Cochrane Review examining psychostimulant effectiveness in cancer fatigue reported: “There is increasing evidence that psychostimulant trials provide evidence for improvement in CRF at a clinically meaningful level”.  Another 2015 Cochrane review of studies for people with very serious illnesses reported that modafinil and methylphenidate may help improve fatigue in palliative care.  (The review suggested that dexamethasone, methylprednisolone, acetylsalicylic acid, armodafinil, amantadine, and L-carnitine should be studied further.) These trials do not, however, address the possible long-term effects of the drug.

Chronic Fatigue Syndrome (ME/CFS) Physicians Report – Dr.Teitelbaum states stimulants including Ritalin and Dexedrine ‘can be very helpful for many people with CFIDS’. Dr. Lapp has found success with stimulants as well and focuses on methylphenidate (Ritalin), dexamphetamine (Dexedrine/Adderall), and modafinil (Provigil).

Dr. Bateman finds CNS stimulants are more effective in fibromyalgia-type patients. She says “The more pure CFS you have, the less you can fix it with a stimulant” and she raises the problem of sensitivities to drugs.

Dr. Pocinki notes “For patients who are complaining of fatigue or cognitive dysfunction, stimulants like Provigil, Ritalin or Adderall may be prescribed to boost energy and improve focus and concentration… However, you can’t prescribe stimulants without keeping a careful eye on how they impact other aspects of the illness. They can make rest and sleep more difficult, or worse, they can precipitate the dreaded push-crash cycle.”

In 2002 Glenda H. Davis, MD, and Patricia Stephens, CNC, reported that ADHD medications can provide an “unlikely source of relief” in FM through their ability to alleviate fatigue, improve cognition and reduce pain.  They cautioned, though, against self-medicating and urged FM patients to seek out good practitioners.

Dr. Jon Kaiser, an alternative-focused MD, who has or had ME/CFS at one time – he improved using rest, pacing, micronutrient therapy, physical therapy, and an aggressive stress reduction program – believes that stimulating drugs in combination with micronutrients can help revive the mitochondrial functioning in ME/CFS patients.  Once that mitochondrial wake-up has been achieved, the drug is no longer needed.

Dr. Murphree, an alternative health-focused MD, agrees that psychostimulants can boost energy levels but asserts that long-term use – which the clinical trials do not address –  is “a disaster for most folks, but especially so for those with fibromyalgia and or chronic fatigue syndrome (CFS/ME)“.

Focusing on the effects of psychostimulants on the adrenal glands, Murphree, pointing to a long list of possible side effects, argued that “Whipping the exhausted horse harder and harder isn’t the answer – eventually your fatigued adrenals, like the exhausted horse, will give out, no matter how hard you try to stimulate them.” Similarly, Dr. Paul Cheney  (now retired) believed that while SSRIs and stimulants could be beneficial in the short term in the long term they could ‘fry your brain’.

Find out more about stimulants and ME/CFS/FM.