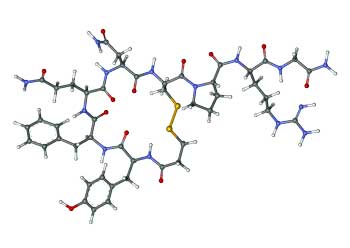 About 40% of POTS patients experienced significant relief in one trial

it may help with low blood volume, delivery of oxygenated blood to the tissues, and orthostatic intolerance. A large subset of patients with ME/CFS and/or POTS have low blood volume which impedes blood flows to the brain, in particular, upon standing or sitting.

A 30-person, randomized, cross-over desmopressin study in 2012 found that 0.2 mg orally/day of Desmopressin resulted in reduced heart rate and symptoms in POTS patients after standing for 10 minutes. Their blood pressure was unchanged.

A larger (72-person) long-term (@ 12 months) 2015 study also found that DDAVP decreased the heart rates upon standing and improved symptoms ( dizziness, fatigue, palpitation, nausea and syncope). About 2/3rd’s of patients in the larger study – all of whom were considered treatment-resistant – were able to tolerate the drug. Of those about 40% experienced significant symptom relief upon standing including reductions in dizziness, fainting, fatigue, anxiety and palpitations.

Two DDAVP ME/CFS studies have been done. In 1999 DDAVP normalized the pituitary-adrenal response to ovine CRH. In 2017 Miwa found that 120μg desmopressin given for five days ameliorated the symptoms, and decreased the heart rate during a 10-minute standing test in patients with low urinary osmotic pressure. Performance status scores for the activities of daily living were also improved.

In 2017 Dr. Lucinda Bateman (Bateman Horne Center) reported on a person with ME/CFS who recovered using Desmopressin. Dr. Bateman, though, cautioned about the use of desmopressin:

I would like to add a strong note of caution to the use of desmopressin. This drug can effectively raise blood volume and constrict blood vessels, which can be helpful in managing orthostatic intolerance syndromes. But desmopressin must be monitored carefully by a skilled physician, with lab tests, because inappropriate or poor management can result in severe medical consequences, including life-threatening hyponatremia, fluid overload, and hypertension.

I believe our first case had an immediate and complete recovery response because we happened to make an early diagnosis and intervene promptly to support the core pathology. In ME/CFS patients who have been ill longer, the impact of desmopressin is much less predictable.

While it may provide some benefit to those with orthostatic intolerance, the impact is definitely less dramatic. Most of all, it should be managed carefully to do no harm.

While noting that DDAVP is generally safe, Vanderbilt researchers reported using it as a “3rd line” treatment; i.e. it’s used only after other treatments have not been successful due to worries about reduced sodium levels (hyponatremia). They typically have their patients use it no more than once a week and often for “special occasions” or outings. They report good results from this.

The long-term and larger DDAVP POTS study did find hyponatremia (low sodium levels) in 12% of patients, but the authors noted that the lowest sodium level seen was 125 mEq/l and that sodium levels returned to normal within weeks of stopping the medication. They stated that “DDAVP appears to be a potentially safe, effective, and inexpensive treatment modality in the treatment of POTS” and called for it to be used earlier in a POTS treatment regimen.