“We are going to ramp this up.” Francis Collins

Should you attend the MillionsMissing protest for more funding? Consider this. It’s been almost a year since NIH Director Francis Collin’s pledge to greatly expand chronic fatigue syndrome (ME/CFS) funding prompted articles such as these:

Collins said medicine “desperately needs some new ideas” in the fight against this disease, that the NIH hadn’t focused enough attention on ME/CFS and that  increase in funding “will be substantially greater than the current five or six million a year”. “We are going to ramp this up.” he said.

Eleven months later there’s not been much ramping. One intramural study and one failed initiative to add  limited funding to past projects constitutes all the ramping the NIH has done over the past year. The key part of the effort to add extramural funding that was expected to be approved early this summer has languished.

This is not to blame our supporters at the NIH. We probably wouldn’t have this opportunity if not for Vickie Whittemore and others, but it is to suggest that effort to increase funding has probably run into some roadblocks. In fact, given our history, we can assume the NIH is littered with them and we probably should have expected this. The NIH was never going to suddenly change it’s spots after 25 years, and blow ME/CFS an extra $50 million or  $20 million.  Vickie and others are fighting a difficult battle and they need our support. 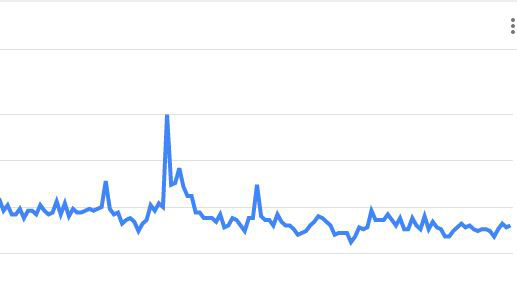 The big boost in public interest in chronic fatigue syndrome is over.

IOM “Bounce” – Gone – The chart to the right that shows google search results for chronic fatigue syndrome is another reason we need to support the MillionsMissing protest effort. That big spike to the left corresponds to the publication of the IOM report in early 2015 That presented a window of opportunity and Vickie Whittemore, Dr. Koroshetz and Dr. Collins ended up grabbing it.

We were a hot item for awhile. The danger always was, though, that as we faded from the scene our support would fade with it.  The mediocre support the Institutes, for instance, gave for a small effort to add funding to past studies was not a good sign. This long delay in adding the real meat to NIH funding for ME/CFS is not a good sign.

The NIH Funding Boost – Going, Going, Gone – Another reason to support the effort now is that the NIH got its biggest increase in funding ($2 billion) in twelve years this year. That means the NIH finally does have uncommitted money it can use for ME/CFS. We don’t have to take funding from another disease. It may be ten years before we get another funding boost like.  If we don’t get our funding now, it’ll be ten times tougher when the NIH returns to it;s normal funding cycles.

Francis Collins – Going, Going, Gone? – Francis Collins hasn’t mountains for us yet, but he is the first NIH director to publicly support ME/CFS. In four months with a change in administrations he could be gone. We need to get locked into the system before he disappears.

In short, the stars have aligned for us this year. We had the IOM report, extra NIH funding, and a supportive Director. If we don’t take advantage of this opportunity it’s probably going to be ten times harder the next go around.

The last MissingMillions protest garnered Jen Brea and other advocates a meeting with a top NIH official. The truth is that no disease can make it without the NIH. We need their funding – and we need to keep that kind of pressure on.

The MillionsMillions protests are taking place in 25 cities across the U.S. and Europe on Sept 27th.

Find out more about them and how to support them here.