Could Fibromyalgia Be A Low-Endorphin Disease?

Exercise studies indicate that exercise is generally helpful for people with fibromyalgia but that’s not the end of the story. Most FM exercise studies focus on either mild or short duration exercise protocols.  Sustained, high-intensity exercise, on the other hand, is often poorly tolerated. A recent study may suggest why that might be so.

This study examined the effect of 30 minutes of strenuous exercise (70% of predicted maximal heart rate) on 30 FM patients and 15 healthy controls. (The protocol appears similar to that used by Dane Cook in his ME/CFS study – see upcoming IACFS/ME blog). 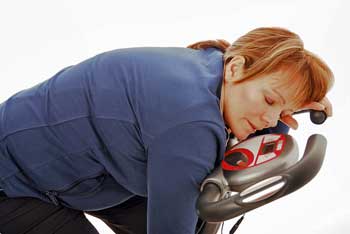 Light to moderate exercise can be helpful in FM; strenuous exercise – not so much.

They measured levels of beta-endorphin, a neuropeptide that fits onto opioid receptors like a key into a lock, triggering the release of endogenous opioids called beta -endorphins that play a critical role in reducing pain. Beta -endorphins are very effective at reducing pain; they’re 18 to 33 times stronger than morphine.

They also play a major role in stimulating the ascending pain inhibition pathways. The poor performance of these pathways, which originate in the spinal cord, may account for much of the pain in FM.

During exercise beta -endorphins should kick in not just to damp down feelings of pain but also to provide feelings of well-being and even exhilaration. They’re believed likely to be responsible for a “runner’s high” – something which is surely a distant memory for many people with FM.

These neuropeptides decrease sympathetic activity (which is increased in FM), improving sleep (which is poor), and facilitate psychological stability (you be the judge).

Three studies in the 1980’s looked and failed to find decreased levels of beta-endorphins in FM patients’ cerebral spinal fluid. Those studies did not, however, include an exercise component. Plus later, a kind of very basic controversy arose which drives patients nuts, but which seems to crop up fairly frequently in medicine. It’s apparently not clear which kind of fluid (serum or PBMC’s) is the proper testing medium.

This study, which measured, ironically, serum levels, found lower levels of baseline beta-endorphins and a reduced increase during exercise in FM patients relative to healthy controls.  (Because individuals can differ as to their “normal” levels of a factor, a reduced increase of a factor over time may be a more important measure. Stay tuned for the CDC’s cortisol study in the IACFS/ME conference reports for more).

The authors suggested that reduced baseline beta-endorphin levels and their lacklustre rise during exercise could help explain the pain and stiffness found in FM after extensive exercise.

The authors chalked that exercise intolerance up to autonomic nervous system dysfunction and cardiovascular problems. Interestingly they suggested that the reduced exercise capacity found could be responsible for the low beta-endorphin levels. It apparently takes a certain exercise capacity to get the beta endorphins really flowing.

They also suggested that the lower beta-endorphin levels could be causing or contributing to the allodynia many people with FM experience.

This study, unfortunately, has one howling problem; because FM participants were significantly older than the healthy controls the lowered beta-endorphin levels could reflect that age difference. The authors argued, though, that there was no evidence that the age difference would affect the rise in beta-endorphins during exercise. Clearly, more study is needed.

“A promising approach in the treatment of chronic pain is to mobilize the endogenous opioid system..” Bonnard et. Al. 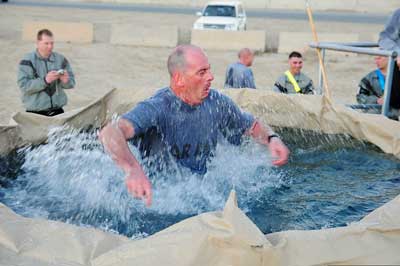 The authors said nothing about treatment but if endogenous opioid levels are reduced in FM then increasing them should be helpful. On the new drug front, drugs that inhibit the breakdown of beta -endorphins – allowing endorphins to hang around longer, show potential. These drugs, called Enkephalinase inhibitors, are being tested in laboratory animals.

On the more alternative front Self-hacked (who else?) provides 30 ways to increase endogenous opioid levels, one of which includes taking a cold shower! (I know one brave person who finds ice baths helpful.) Other possibilities include things like massage, social interactions, acupuncture, butyrate (gut studies indicate butyrate is probably low in ME/CFS), capsaicin, marijuana, pregnenolone, kratom, transcranial magnetic stimulation, alcohol (in moderation), eating chocolate, magnesium, oxytocin (be in love / have sex), and others. (See the entire list here with recommendations on treatment options from Self-hacked).

Low dose naltrexone (LDN) is an obvious option for ME/CFS and FM patients. LDN could be succeeding because it causes the body to pump out endorphins or blocking microglial activation, or possibly both.

The unfortunate inability of this study to involve age and sex matched controls casts a pall over its results. Still, it appears to make perfect sense that low endorphin levels could be both reducing the activity of the pain inhibition pathways in FM and be responsible for the pain that intense exercise can bring. Hopefully, larger exercise studies will follow.

If that’s so then finding ways to increase endorphin levels could provide significant help. In the meantime people with FM could use this studies results as a reason to pamper and enjoy themselves as much as possible – and hopefully perk up those endorphin levels a bit.