Many voxel based brain studies have been done in fibromyalgia. These studies, which measure brain volume, have found reductions in gray matter (the stuff that makes up the neurons) in many brain regions including the frontal, cingulate, insular and motor cortices plus the hippocampus, amygdala, brainstem and others.  Plus, studies have also found increased volume in the frontal cortex (again!), the somatosensory cortex, nucleus accumbens, cerebellum and others. The findings, however, have been inconsistent. One study might find problems with the amygdala, while another finds issues in the motor cortex. 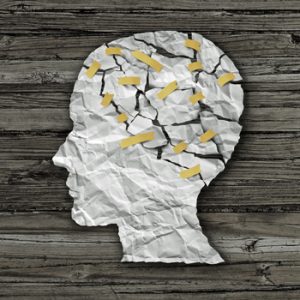 Many gray matter studies have been done in fibromyalgia…but which were accurate?

Researchers chalk those differences up to small sample sizes,  heterogeneous patients, differences in age, disease duration or disease severity, etc. The point is that we really don’t know which abnormalities in brain volume we can trust.

Enter the Chinese researchers. By doing a meta-analysis of all brain imaging studies they hoped to give us a good foundation to stand on, regarding what’s going on with FM and brain volume.

Their final analysis ended up containing 8 studies with 10 datasets containing some 300 FM patients and controls.

That the anterior cingulate cortex popped out was surely no surprise. This area of the brain plays a critical role in pain regulation and decreased gray matter in the ACC is found in other chronic pain disorders.  (That’s good news for FM patients looking for future treatments. The bigger the overlap between FM and other chronic pain disorders, the better chance a treatment will be found for both.)

One part of the ACC is devoted to the attention we give to pain and to the anxiety often associated with painful sensations.  Another study suggests that people with fibromyalgia may have special problems with “anticipation”. Just about everyone in pain probably worries or anticipates that more pain is just around the corner. That’s a natural reaction, but that kind of anticipation surely sets the sympathetic nervous system (fight or flight) on edge, which, in turn, is associated with more pain.

Given the increased rate of mood disorders found in FM, it’s perhaps not surprising to learn that gray matter reductions in one area of the ACC are highly associated with mood disorders.

A huge study analyzing 193 studies involving 16,000 patients with mental illnesses (depression, anxiety, schizophrenia, etc.) surprisingly indicated that portions of the brain (anterior cingulate, insula) associated with information processing and executive decision-making (not emotional issues) were common to all mental illnesses. These are the portions of the brain that involve attention, planning and decision-making and the ability to inhibit impulses. The authors of the study simply called them alarm bells in the brain that were not functioning well. It may be that in FM the alarm bells are not alerting the brain to problems with pain processing.

As people with FM know, FM is a complex disorder which causes much pain but which also affects cognition, mood and the senses, and that’s what the other analyses revealed.

Reduced gray matter was found in three areas of the default mode network (DMN). The DMN is a network in the brain associated with all sorts of activities including emotional processing, self-referential thought (day-dreaming), cognition and pain perception. DMN network problems have also been found in a variety of other disorders such as Alzheimer’s, anxiety, insomnia, depression, etc. That suggests that problems with the DMN may be associated in FM with poor sleep, cognition, and depression.

Finally, the meta-analysis revealed increased gray matter in the cerebellum, a part of the brain associated with both sensory processing and movement. Other research has shown that the filters used to process and make sense of sensory information aren’t working properly in FM. FM patients’ brains appear to have trouble disengaging from innocuous background noises as well. 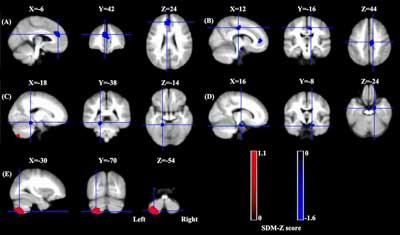 All this points to the sensimotor regions of the brain scrambling to keep up with what may be torrents of sensory information hitting it. That could show up in people with FM having difficulty tolerating and being more fatigued in higher stimuli environments – something that clearly happens.

There is growing recognition of the importance that sensory problems play in FM. They help to make FM the complex disease that it is and differentiate it from some other chronic pain states.  A recent MRI study examining brain activation associated with both pain and non-painful stimuli produced a brain signature with both high specificity (got the healthy controls right) and sensitivity (got the FM patients right). That suggests that the sensory problems in FM must be taken into account.

Gray matter is just one of the issues researchers have found in FM patients’ central nervous systems. At least four central nervous system problems are contributing to the pain and other problems in FM; windup and central sensitization in the spinal cord, gray matter losses, problems with blood flow and brain activation, and connectivity issues between different parts of the brain.

It’s not clear why these gray matter losses are occurring. They could be due to cell loss or the loss of nerve synapses or they may simply be caused by decreases in cell size or blood volume.  They could also, at least in part, be simply the result of being in chronic pain, and that’s the good news.  It turns out that even acute, temporary pain is associated with a degree of gray matter loss – which is reversible once the pain problems are resolved.

Problems in the ACC may help explain why CBT and other behavioral therapies can help in reducing the suffering, anxiety and to some degree the pain in FM.  Developing effective brain stimulation techniques that target the ACC and other areas is an ongoing project.

Acupuncture doesn’t work for everyone, but an interesting study found that not only did it reduce pain but brain imaging indicated that it had actually reduced activity in different parts of the brain.

The multiple brain regions affected in FM suggest it’s a complex disease which will likely require multiple treatments for optimal effectiveness. Some treatment trials have begun to combine treatments in novel ways. Several studies are now combining FM drugs with CBT and other behavioral therapies to see if one therapy can help boost the other. Going a step further combining brain or vagal stimulating techniques with drugs, supplements or behavioral therapies such as CBT, meditation and/or neurofeedback would make sense.

The newest approach to pain, though, could eventually make drugs obsolete. Next up we look at a brand new approach to treatment being undertaken in the NIH’s SPARC project and what it might mean for FM.

As the brain scan data keeps rolling in – and we know it will in FM – ultimately researchers and doctors should be able to identify subsets and target treatments using them.