The NIH’s Stimulating Peripheral Activity to Relieve Conditions (SPARC) is exploring an entirely new way of treating disease. It proposes to tweak the electrical circuits (nerves) in our bodies to return people to health. 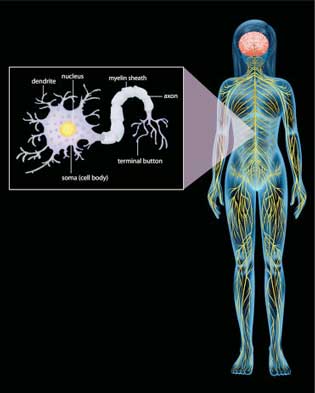 These nerves (every nerve outside the brain and spinal cord) control the health and functioning of every organ in the body. SPARC is slated to spend $250 million over the next seven years in an attempt to learn how to manipulate these nerves to reduce pain, relieve inflammation, heal heart problems, fix gut disorders and more.

Nobody knows if the self-proclaimed “high-risk” project will be successful, but if it is it could usher in a new, side-effect free way of treating illnesses that could put drugs to shame.

The peripheral nervous system is stunningly complex but the general idea is not. It simply consists of using some sort of generator to send electrical impulses down a nerve, causing it to fire. The crude technology used today employs a kind of scattershot approach which ends up activating bunches of nerves.

But with better nerve maps and more refined tools it should be possible to activate just the right fibers in the right nerves to, say, stop some inflammatory processes in their tracks. Or to tweak nerves to fix gut problems, reduce pain, reverse heart failure, or treat diabetes. These are just a few of the possibilities proponents of the electroceutical revolution can envision.

These electroceuticals are either placed on the skin or are surgically implanted where they emit electrical impulses that either fire up or silence nerves. They need not be near the organ of interest at all; one device for patients with bladder problems is placed on the soles of their feet.

DARPA – the Department of Defense’s Defense Advanced Research Projects Agency – calls these technologies disruptive and they are. We rely on drugs for most treatments but drugs are often slow to work, expensive, and because they are imprecise in their effects, often cause multiple side-effects.

Because electroceuticals could, by turning on or off nerves that control how our bodies work, potentially be able to precisely target damaged areas, they may be more effective than drugs and virtually side-effect free.

Instead of letting the field develop on its own in a haphazard manner, SPARC is taking it on in an organized manner. First they’re focusing on precisely mapping the nerves in the body and understanding their function. As they’re doing that they’ll be collaborating with companies which will be building the better tools of the future. The private sector and academia are collaborating on projects as well.

This is the kind of work that only a research funder with the clout and funding capability of the NIH has the capability of doing.

SPARC provided $20 million to 27 research projects in 2016 and aims to boost that to $250 million over the next six years, but that may end up being just a drop in the electroceutical bucket. In “A Spark in the Periphery” Emily Walz reported that GlaxoSmithKline and Verily Life Sciences (formerly Google Life Sciences) are pumping more than $700 million into a company, Galvani Bioelectronics, that will develop miniaturized electronic devices for peripheral nerve stimulation.

DARPA, the Defense Advanced Research Projects Agency, is getting into the act as well, devoting $90 million into the hunt for better electroceuticals. Plus it has its ‘Targeted Neuroplasticity Training’ program — to explore how to stimulate peripheral nerves to improve how the brain learns. Its goal is to speed up the time needed to train defense personnel but the technologies it produces could surely help to enhance cognition in disease states as well.

Plus, two large centers focused entirely on bioelectronics at the Karolinska Institute in Sweden, and the Feinstein Institute in New York, are being built. One estimate suggests the electroceutical market (which includes brain stimulation) will be worth $25 billion by 2021.

The vagus nerve is the big elephant in the room in the electroceutical revolution. The largest nerve in the body, it innervates and is responsible for the health of every organ in the body. The road to stopping inflammation, to curing heart disease, to stopping gastrointestinal illnesses could run, at least in part, through the vagus nerve. Numerous studies suggest vagus nerve activity is blunted in fibromyalgia and chronic fatigue syndrome (ME/CFS).

Vagus nerve stimulators have been used in epilepsy for decades and show promise in fibromyalgia and possibly ME/CFS, but they don’t work for everyone with vagus nerve problems, and are crude compared to what we may see in the future. Fully harnessing the power of this complex nerve (the neck area of the vagus nerve contains over 100,000 fibers) is going to take some work, though, and significant resources are going to be needed to precisely map out its and other nerve pathways. The goal, ultimately, is be able to tweak just the right nerve fibers to effect the results desired.

SPARC just released its first slate of grants in which the vagus nerve plays a major part. One SPARC study, for instance, will seek to understand how stimulation of the vagus nerve endings in the ear impact the hypothalamus, heart and brainstem. Another will determine how activation of the sympathetic nerves leading to ganglia in the neck affect breathing and blood pressure and produce inflammation.

Almost half of the SPARC funded studies will focus on the “second nervous system” — the gut. One will map the vagus nerve innervation in the small intestine to learn how it affects gut motility and functioning in hopes of finding new ways to treat the pain associated with irritable bowel syndrome and other “sensory” gastrointestinal disorders. Another study will identify all the genes expressed by the nerves in the gut in the hopes that researchers will be able to manipulate specific neurons in the gut to improve gut motility or movement (or the microflora).

The immune system may ultimately be the biggest target for ME/CFS. It became clear in 2000, that besides everything else it does, the autonomic nervous system is also an important immune system regulator.
It was then that Kevin Tracey and others discovered an “inflammatory reflex” which senses inflammation in the body and relays that information to the brain, which then prods the vagus nerve to tell T-cells in the spleen to tamp down that inflammation. 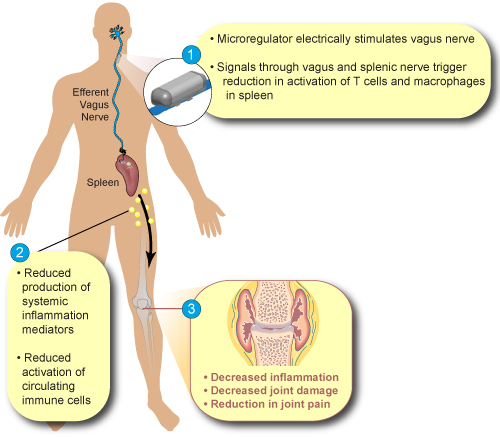 That message may very well be getting missed in ME/CFS and FM — two possibly inflammatory disorders with blunted vagus nerve activity. Tracey founded a company called SetPoint that hopes to use electroceuticals to reduce inflammation by activating the vagus nerve.

SetPoint recently announced it had been able to reduce pro-inflammatory cytokine production (TNF-a) by targeting a fairly select group of vagus nerve fibers. That could spell good news for SetPoint’s future given the multi-billion dollar market existing for cytokine inhibitors. SetPoint says its implantable microregulator will last for 10 years.

Stanford University is producing ultraminiaturized stimulation devices that can be injected rather than surgically implanted into deep tissues. University of California at Berkeley has produced a long-lasting dust-sized sensor that can not only monitor nerve traffic but manipulate it as well. Another group is developing viral constructs capable of targeting specific sensory neurons with the goal of adding people with interstitial cystitis and similar diseases.

Mapping the nerves, understanding what each does, and building new tools to manipulate them will take time, but the promise of the “electroceutical revolution” is immense and major pharmaceutical companies like Glaxo-Smith Kline are investing heavily in an electroceutical future.

The downside right now for fibromyalgia and chronic fatigue syndrome (ME/CFS) is that SPARC is mostly interested in learning how to manipulate organ functioning and no organs have been specifically tied to either disease. Vagus nerve problems, however, have been tied to both, leaving vagus nerve stimulation a possible future therapy. With that and all the nerve issues popping up in fibromyalgia, it’s hard to believe that SPARC won’t turn up something that won’t apply to both diseases over time.