Is Fibromyalgia Making You Older?

Being in chronic pain is no fun, that’s for sure.  Think of any area of your life – your work, your relationships, your mood, your finances – and see if chronic pain doesn’t impact it negatively.

But is being in chronic pain itself dangerous?  Some in the medical profession give chronic pain short shrift. They assert that it’s the result of a false alarm from your central nervous system; i.e. while it’s uncomfortable, it doesn’t constitute a threat to you physiologically.

The pain in FM is certainly different from normal pain. Normal or “nociceptive” pain results from a tissue injury, while the “pathological” pain in FM is believed to derive mostly from the central nervous system. A tissue injury (that should heal) is the problem in normal pain; a wounded or dysfunctional central nervous system (which may not heal) is the problem in FM. 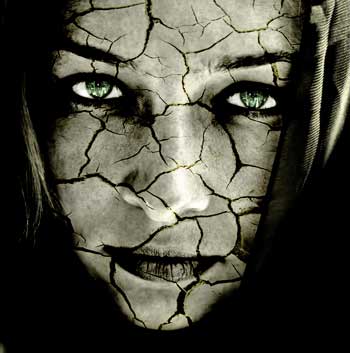 Is having fibromyalgia or being in chronic pain dangerous?

But does all that central nervous system tweaking add up to actual physiological problems? Afton Hassett and Daniel Clauw think it might.

They point to evidence suggesting that simply being in chronic pain may increase one’s risk of coming down with a cardiovascular or neurodegenerative disease, or cause cognitive declines or even, yes, contribute to an earlier than usual death.  First they looked at mortality.

A large 2009 English study found quite significantly increased deaths from cardiovascular disease and cancer in people with widespread pain – the kind of pain people with FM have. A 2001 study that found similar results but was flummoxed as to why – stating, “At present there are no satisfactory biologic explanations for this observation”.  A 2014 meta-analysis reported that having widespread pain was indeed associated with small increases in mortality from cardiovascular disease and cancer.

But what about aging? Regarding physical functioning, the news was not good. With regards to aerobic endurance 80% of women with fibromyalgia did not meet fitness standards, 66% failed lower body strength and balance/agility tests. The findings suggested that many women with FM don’t meet the fitness standards experts recommend for maintaining physical independence as they age. (The study recommended more exercise.)

Our brains, like the rest of our bodies, change as we age. In fact they get smaller. A recent study examining the brain volume of FM patients suggests that their brain volumes are a bit smaller than expected – another possible sign of more rapid aging. 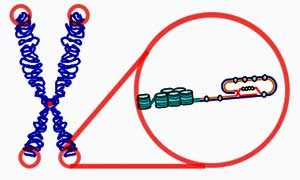 Telomeres are the end-caps that protect chromosomes. If they get too short the news is not good.

The news in FM overall wasn’t all bad: FM patients had only a “trend” towards shorter telomeres vs. healthy controls, but within the FM group, the higher the pain an FM patient was in, the shorter their telomeres were. Being in severe pain and being depressed tweaked their telomeres a bit more.

A small follow-up study suggested that those short telomeres were associated with premature brain volume loss in three parts of the brain – all of which were associated with pain processing.  That suggested that the biological stress imposed by FM – whether it involves inflammation or oxidative stress or whatever – was hitting that part of the brain hard.

The study evidence isn’t completely consistent, but does suggest that being in body-wide pain (perhaps because of inflammatory processes and/or inactivity?) as opposed to being in chronic pain, may modestly increase one’s risk of cardiovascular disease or cancer and perhaps even early death. Reductions in telomere length coupled with reductions in the volume of pain processing centers in the brain suggest that FM patients are indeed taking a biological hit from being in pain much of the time. Plus studies indicate that they are way behind the 8-ball with regards to cognition and to functioning as they age.

The fairly sparse – because not many studies have been done – it does suggest that people with FM may have more difficulties as they age than healthy people. 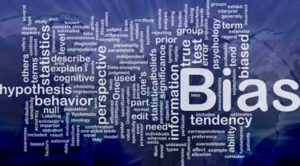 What can explain the NIH’s neglect of a disease that may affect 10 million people in the U.S?

Daniel Clauw, one of the study authors, has been championing fibromyalgia for decades. Clauw hoped this review, which was published in 2015, would demonstrate that being in chronic pain has real and significant physiological consequences.

During the approval of Lyrica for FM in 2008 the skeptics came out. In a NY Times article “Drug Approved: Is Disease Real?“, Dr George Ehrlich, a rheumatologist, suggested that people with FM simply can’t handle modern life.  Most people, he said, ”manage to get through life with some vicissitudes, but we adapt. People with fibromyalgia do not adapt.”

Almost ten years later, it seems the NIH agrees – it spends somewhere around $1 per FM patient per year, and has reduced FM funding by 30% over the past five years. (That occurred during a time when the NIH was purportedly paying more attention to pain research. Pain research funding has, however, remained flat.)

The fact that Clauw wasn’t able to refer to more studies was in itself an indictment of the neglect being shown FM. The scientific literature around a disease that effects so many people should be packed full of longitudinal studies that examine brain volume,  central nervous system functioning, cognitive processing, etc. over time. Recent chronic fatigue syndrome studies, for instance, suggest that a hyperactive immune response early in the disease gives way to an under-active immune response later.  One wonders what longitudinal studies of pain and stimuli processing pathways would reveal in FM…

A recent review, “Illness Perceptions and the Burden of Disease in Fibromyalgia“, though, outlined the difficult time many FM patients have trying to get help. Calling the typical health care journey “lengthy and complex”, they reported that patients are “likely to receive suboptimal or inappropriate pharmacotherapy”. The authors asserted that, “major improvements in FM recognition and management are urgently needed.”

Other studies show that fibromyalgia poses severe burdens on both patients and society.  A French study found that FM imposes, “a substantial economic and human burden on patients and society”. Very high rates of unemployment and substantial direct costs for medications and physician visits characterized Canadian FM patients. FM patients saw the doctor more, had more comorbid disorders, and cost the Canadian medical system significantly more than patients with other chronic illnesses.

Check out migraine at the lower right – high burden of illness and low funding. Fibromyalgia is nowhere to be seen.

Bill Gates’s Institute for Health Monitoring and Evaluation is designed to address the health inequities in the world.  By focusing on burden of illness it has revealed that many health dollars have been spent on diseases that relatively speaking, pose less  consequential burdens on society.  The IHME, for instance, has shown that migraines pose larger illness burdens on society than many better funded diseases. If research institutions were focused on doing the most good for the most people they would clearly focus more funding on migraine. (It continues to get pitiful funding.)

What’s really pitiful, though, is that the IHME doesn’t even include fibromyalgia – one of the most common pain disorders in the world – in the list of disorders they track. Why? Probably because fibromyalgia is so under-funded that the studies have not been done that would enable them to do that. In the NIH’s analysis of burden of illness and funding, fibromyalgia is nowhere to be seen.

It’s very possible that people with FM are aging more rapidly than usual; the reduced physical activity that comes with FM by itself could be causing that.  Any person with FM probably wouldn’t be surprised by that news. The kind of distress caused by FM must, anyone with the disease would feel, have consequences.

What they would be surprised by, though, is that a disease which affects them so considerably,  could still given such short shrift by researchers. THAT is distressing.