As a donor-based organization Health Rising really, really does not like to delve into partisan political matters (and it probably shouldn’t :)). Every now and then something calls forth a step into dangerous waters. That something this time is the American Health Care Act or AHCA passed by the house to repeal and replace the Affordable Care Act.

The question before the chronic fatigue syndrome and fibromyalgia communities is what impact it may have on their ability to get affordable health care.  As with any bill there are winners and losers. 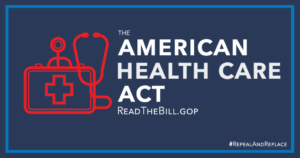 The winners of the AHCA? Not people with pre-existing conditions…

Because the bill passed before the Congressional Budget Office had a chance to analyze it (or even before many members had the opportunity to read it) a complete analysis of the bill is impossible. (The CBO will weigh in in a couple of weeks.)

The Upshot at the New York Times, however, is known for its objective, fact-based approach to issues. Fiercely data-driven, it replaced the void created when Nate Silver left to create the 538 site which specializes in statistically driven analyses.

The Upshot’s calculus of the American Health Care Act’s winners and losers didn’t include the big shock for the chronic fatigue syndrome (ME/CFS) community –  the (surely unintentional) zeroing out of the Center for Disease Control’s funding for its ME/CFS program. That occurred, Emily Taylor of The Solve ME/CFS Initiative (SMCI) reported, when the bill completely eliminated The Prevention and Public Health Fund (PPHF) created by the Affordable Health Care Act to enhance efforts to prevent illnesses before they start. The program also helps people with chronic illnesses to manage their illnesses better.

Somehow funding for the CDC’s program on ME/CFS  – which was initiated during a time when it appeared that ME/CFS was an infectious disease – got placed in that fund. If the American Health Care Act passes in its current form, the CDC’s ME/CFS program is toast, according to The Solve ME/CFS Initiative’s Action Alert.

Other Winners and Losers

According to the Upshot, the bill’s winners include:

“The mix of policies could allow insurance companies to charge sick people prices that few of them could pay. And it could allow them to exclude benefits that many healthy people need when they get sick. The result could be a world where people with pre-existing conditions would struggle to buy comprehensive health insurance — just like before Obamacare.”

What kind (if any) health insurance do you have? Take the Poll.

My status with regards to health insurance is....

The AHCA as it now stands has the potential to negatively affect people with ME/CFS/FM in a number of ways. While it’s a boon to wealthier Americans in better health, it appears to be particularly bad news for the less well-off who have health issues (and to older Americans) – a category that probably includes many people with ME/CFS/FM. Plus the bill as it stands wipes out funding for the CDC’s ME/CFS program which is in the midst of a groundbreaking multi-site study of ME/CFS doctors and patients.

People in the lower income categories will see large reductions in Medicaid or health care subsidies. The substantial roll-backs will, ironically, leave Americans with the least money with less ability to get health care. Others will simply get kicked out of the health insurance market altogether. Older Americans not receiving Medicare will likely see such increased insurance premiums that the CBO believes many will leave the health insurance market altogether. (I’m in this category.)

Given these caveats, it’s no surprise to see major disease support groups including the American Heart and Lung Associations come out strongly against the AHCA. Calling the bill a patchwork effort, the support groups stated the bill would leave millions of patients “at risk of not being able to access life-saving treatments and care.” “There is no substitute”, they said, “for fundamental, unequivocal protections for people with pre-existing conditions.” The AHCA, they asserted, “would undermine vital safeguards against being charged more for insurance based on health status.”

It would also “include(e) many low-income and disabled individuals who rely on Medicaid—and increase out-of-pocket costs for the sickest and oldest among us.”

The disease groups were joined by virtually every major healthcare stakeholder – from the to the American Association of Retired Persons in denouncing the bill. The AARP estimated that the premiums for a 64-year old making $26,000 would rise by $12,000 a year to almost $15K a year.)

Significant problems with President Obama’s Affordable Care Act exist and need to be resolved, but the inescapable conclusion for people with chronic illnesses is that the AHCA is not the way to fix it.  The Bill moves onto the Senate which has promised to essentially start over.

The Bill moves onto the Senate where Majority Leader McConnell has convened a committee that contained some of the most notable hard-liners such as Ted Cruz while failing to include prominent moderates. Cruz even suggested that the group could make the bill more restrictive than it is.

If you’re worried about this bill please contact your Senator and make your concerns known.

As someone with a pre-existing illness called chronic fatigue syndrome/myalgic encephalomyelitis (ME/CFS) I have several concerns. For one, the AHCA, by zeroing out funding for the Prevention and Public Health Fund (PPHF), eliminates the Center for Disease Control’s chronic fatigue syndrome program. That program is currently in the midst of producing ground-breaking results – which have been years in the making –  on the effectiveness of treatments for people with ME/CFS. It would be a tragedy if the CDC’s research  program on ME/CFS became a victim of the health care insurance debate

I also cannot support any health care bill which does not include protections that ensure that my insurance premiums will not become unsustainable.

I did not choose to be sick. I would not wish this or any other illness on anyone but to have to be ill – and be penalized for being ill – is beyond the pale. There must be a better way.

Surely you must understand the loss of opportunity and financial resources that comes with having a chronic illness. To go back to the days where I and others are effectively penalized for being ill with catastrophic insurance premiums at precisely the time when we don’t have the finances to cover them, is simply cruel.

As such, ensuring that people with pre-existing illnesses are not penalized is a key issue with me and many others. Please reject the attempt to create high-risk pools which have failed miserably in the past.  Please also reject any attempt to penalize poor working people who can’t afford health insurance by doing away with their support or by restricting their access Medicaid.

I and many others including many disease support groups, the American Medical Association, the American Hospital Association and virtually every major stakeholder in health care urge you to reject the AHCA and create a bill that protects people with pre-existing illnesses and the less well-off among us.

Thanks for your time,
Find out how to contact your Senator here.