The Scientist, the Seahorse and the Nanoneedle – Catching Up with Ron Davis on ME/CFS

The “most famous scientist in the world” visited Ron Davis and his End ME/CFS group a couple of weeks ago and gave the project a thumbs up. James Watson and Francis Crick produced arguably the single most important breakthrough in science in the past 100 years with their discovery of the structure of DNA in 1953. A couple of weeks ago James Watson spent a day with Ron Davis and his team going over their End ME/CFS project. 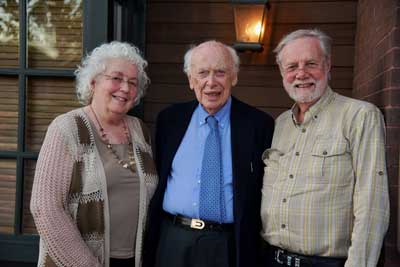 Over his 35 years as director, Watson built the Cold Spring Harbor Laboratory (CSHL) into one of the world’s leading research institutions. It now contains over 50 labs and employs over 600 researchers. Eight Nobel Prize winners have done their work at CSHL.

Watson is also credited with mentoring or supervising many graduate and post-graduate students who went on to have stellar careers, including four future Nobel Prize winners and Ron Davis.

Watson was also a seminal figure in the genetic field’s version of President Kennedy’s moonshot – the Human Genome Project. Watson headed up the project for two years until he resigned to protest NIH’s Director Healy’s attempt to patent gene discoveries stating  “The nations of the world must see that the human genome belongs to the world’s people, as opposed to its nations.”  (The Supreme Court later ruled that genetic sequences cannot be patented.) He has also protested the Vietnam war and nuclear proliferation. In 2007, citing the need for personalized medicine, James Watson became the second person to publish his fully sequenced genome online.

Watson’s controversial statements regarding race and intelligence lead to his resignation from the directorship of Cold Spring Harbor Lab in 2007. (He later apologized for them).

Ron Davis and his wife Janet Dafoe’s history with Watson dates back decades. Watson supervised some of Davis’ work at the Cold Spring Harbor Lab, and when Davis left for Stanford he returned to Cold Spring in the summer to teach classes for several years. During one period Janet worked for a time at his office. Janet said they’ve known Watson for many years, they stayed at his home when Ron was teaching there, and have even backpacked together. They know him as a great intellect and a good friend who sometimes lacks a filter that most people have.

Some people will never forgive Watson for his remarks (he apologized for them), but he has successfully lead some of the largest research institutions and research efforts in the world, and at 91, he is arguably the most famous scientist in the world. He was reportedly greatly intrigued by Davis’ ME/CFS work and bothered by how little resources ME/CFS has received given how serious it can be and how prevalent it is.

The Seahorse and the Nanoneedle

At least four groups (Isabel  Barao – SMCI grant, Avindra Nath – NIH Intramural Study, Maureen Hanson (NIH grant), and Victor Darley-Usmar at the University of Alabama at Birmingham) are using a technology called the Seahorse to study energy production in chronic fatigue syndrome (ME/CFS). This technology is able to simultaneously measure both the glycoytic and mitochondrial energy pathways in many types of cells.

The Seahorse can be used to create a “bioenergetic health index” that shows how well cells produce energy in a variety of different environments. You can use the Seahorse to hit cells with all sorts of things and see how they respond. If you had a machine in your bedroom, you could see how your cells respond to the energy producing supplements you’re taking, for instance.

It appears to be the leading technology for measuring energy production of cells. So what the heck is going on with Ron Davis and Seahorse?  Davis is consumed with figuring out what is turning off the energy in ME/CFS cells.  Is he riding the Seahorse? 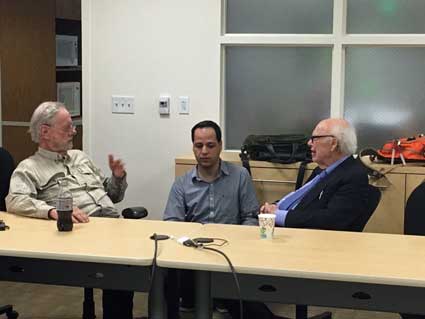 Davis said he’s actually used the Seahorse in the past and is going to use it again shortly. Why? Because, get this, he has an idea about what’s blocking energy production in ME/CFS patients’ cells and wants to test it out using the Seahorse technology.

In the long run, though, he’s going to stick with the nanoneedle tool that his student Rahim Esfandyarpour developed using nano fabrication technologies. Why? Because again, in the long run, Davis believes it’ll give him more useful data.

As always, it seems, Davis is thinking long term. These “nanoneedles” aren’t just designed to measure energy production in ME/CFS patients. He sees them as potentially producing the first biological diagnostic marker for ME/CFS – and an inexpensive one at that.

There are biomarkers and there are biomarkers.  A biomarker that’s too expensive or difficult to administer won’t fit the bill. It’s pretty clear, for instance, that natural killer cell dysfunction is off in ME/CFS, but the NK test is a difficult one which only one lab (Mary Fletchers’) does correctly.  The two day exercise test might be a fine diagnostic test if only it weren’t expensive and time-consuming, didn’t require sophisticated equipment that not everyone has access to, and didn’t temporarily wipe patients out in the process.

Davis’ nanoneedle, on the other hand, could produce a quick diagnostic test for pennies. By hooking it up to an IPhone, the whole test could take about 15 minutes to complete.

Having a cheap, biological test for ME/CFS which targets energy production of all things would clearly be a game-changer. Imagine the simplicity of the message: energy really is low in “chronic fatigue syndrome”.

We’re still a ways off from that. Davis is pleased with how the tool is functioning, but he can’t say it can produce a diagnostic biomarker until it’s been tested in many people with many different diseases.

The next step is transforming the chip, if I have it right, into a wafer so that it can process hundreds of samples quickly.  Davis said he has his electrical engineers working on doing just that.

That wafer is also the key to Davis’ finding a drug for this disease as well.  Davis plans to introduce drugs into patients’ serum and then use the wafer to see which drugs or substances turn ME/CFS cells into energizer rabbits or sloths.

Progress On the Immune Front

Mark Davis runs the biggest immune lab at Stanford. He also happens to be a friend of Ron Davis and he sits on the Open Medicine Foundation’s Scientific Advisory board. Mark’s been working with Ron Davis and that work is starting to produce something. Ron was mum on what Mark is finding, but said that it looks highly significant – significant enough apparently for Mark to send four of his graduate students over to Ron’s Genome Technology Center to work on it. Ron said they’d just cleared space in the lab for them.

That’s might be doubly interesting given that both Mark Davis and Derya Unutmaz, at the Jackson Genomic Lab in Connecticut, have similar interests. Both are fascinated by T-cells and both are developing immune signatures of disease and health. Both appear to be making real progress in ME/CFS and both put in applications to produce an NIH ME/CFS Research Center. Mark Davis is part of Ron Davis’s application, and Unutmaz put in his own. Could they be finding similar problems and if they are, might the two labs collaborate if they both became research centers?

Things are clearly picking up for Ron Davis. Two years ago he was holding fundraisers at his house for his Stanford foundation and trying desperately to marshall support among Stanford faculty. Davis’ message about ME/CFS seems to be getting through.   Janet Dafoe told me she was pleased and heartened at the broad and enthusiastic level of support Stanford researchers and administrators provided for Davis’s NIH funded ME/CFS research center application and for his ME/CFS research in general.

I asked Davis if he had $5 million/year could he do the work in the Stanford Genome Technology Center? Absolutely, he said.  Let’s take a look at what’s happening at Ron Davis’ home at Stanford.

The SGTC is Davis’ baby; he’s the director. It was created in 1993 and contains about 40 staff members. Originally designed to build the next generation technology needed to make genomic  analyses efficient and cost-effective, the SGTC helped create the field of commercial genomics and has spun off several companies. It’s now involved in developing many new technologies.  The SGTC’s website is a couple of years out of date, but lists some 60 patents and over 400 publications that have come out of the Center. 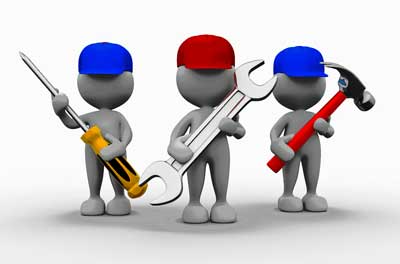 A list of completed projects includes things like “thermocyclers, DNA shearers, plaque pickers, micro-centrofuges and oligonucleotide synthesizers”.  Some of its current efforts involve creating tiny nanosensors to do metabolomic screening, developing a handheld device that can cheaply and quickly identify biomarkers and pathogenic bacteria, developing ways to combine MRI’s and the MRS technology, and developing cheaper and more effective ways of sequencing DNA using thermosequencing.

Plus, there’s the “nanoneedle” being used in ME/CFS which could produce the first diagnostic test (and a cheap and easy to administer diagnostic test at that), illuminate what’s blocking the energy production in ME/CFS, and help determine which drugs may help. That’s the possibility you get when one of the premier inventors of our age gets involved :).

A couple of weeks ago Open Medicine Foundation reported that they’d received another $1 million in donations. Davis doesn’t have the money he needs to fund his vision of a collaborative network of individuals working together to solve ME/CFS, but that network is definitely forming. (That’s for another blog). From quite humble beginnings, Davis and the Open Medicine Foundation have progressed rapidly. We’re not nearly at the $5 million/year Davis needs to fulfill his vision, but if they can keep up the momentum who knows?

Nobody can predict what comes next. Davis has produced at least four technologies that have radically changed the field of genomics, one of which directly made the Human Genome Project possible. I asked Davis if he, pioneer in the genomics field that he’s been, could have imagined how much that field has progressed. He said, “no”.  It’s gone much further, more quickly than he would have thought.

That’s a reminder that we have no idea what the future will hold. Given the resources available, researchers produced wonders in genomics. We shall see what happens in ME/CFS.

Just In!  – Davis Brainjam and Community Symposium on ME/CFS Coming in August

Davis is bringing his now massive metabolic/molecular team – including Dr. Fluge/Mella, Bob Naviaus, Neil McGregor, Maureen Hanson, Chris Armstrong, Mario Capecchi (Nobel Prize Winner!), Mark Davis, Jarred Younger and  many others together  for a two brain-jam session followed by a Community symposium.
Davis’s vision -of top experts getting together to hash out what is going on ME/CFS is coming true. The public is invited to the last day. Find out more and how to attend here.

Like This Blog? Keep the Blogs By Supporting Health Rising