DNA that doesn’t get translated into proteins used to be called “junk DNA” but it turns out that much of it isn’t junk at all. Much of what was formerly turned junk DNA is actually actively modifying how our genes are being expressed and our cells are functioning. 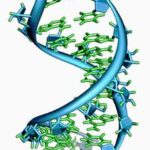 A recent study of a part of our genome formerly known as junk DNA produced what the authors called a “remarkable” result. The genetic component they studied – called long noncoding RNA’s – were so different in the ME/CFS patients that the researchers were able to accurately differentiate ME/CFS patients from healthy controls using just three of them.

Nothing yet has been so effective at differentiating people with ME/CFS from healthy controls. Find out more in the Simmaron Research Foundation sponsored post: