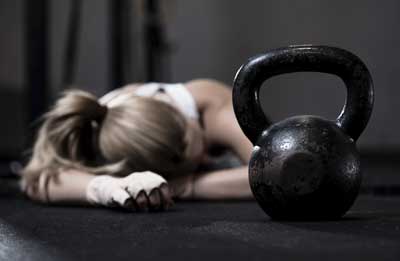 Were you an avid exerciser prior to becoming diagnosed with chronic fatigue syndrome (ME/CFS)? Are you sure you were diagnosed correctly? Symptomatically, overtraining syndrome (OTS) and ME/CFS appear almost identical. Symptoms like fatigue, pain, post-exertional malaise, sleep problems and cognitive issues pervade both “syndromes”.

If it was not for the different triggers (“overtraining” vs infection, toxic exposure, “stress” in ME/CFS), the apparently more severe loss of function and greater duration seen in ME/CFS, one might think they were the same disease.

While some websites state that recovery from overtraining often takes several months, at least one, citing a 2012 paper – states recovery can take months to years, and that the condition can be “irreversible”. Not only can OTS stop training, it can affect “activities of daily living”, and may even end one’s athletic career,

Then again, it may not matter what you were diagnosed with. This study suggests, although the authors don’t state so, that it’s quite possible that ME/CFS and OTS are two branches of the same tree – one associated with athletes and the other associated with non-athletes.

One difference, interestingly enough, is the degree of rigor with which the two diseases are in some ways being studied. While ME/CFS is being studied rather haphazardly, a group of researchers have committed to slice through the methodological issues pervading the OTS research fields to try and get at some answers which stick…

Just as we’ve learned in numerous review papers in ME/CFS, the OTS researchers trying to make sense of the field (and its variable results) were confronted with a bewildering array of possible confounding factors which involved the usual suspects: problems with selecting patients, problems with diagnosis, problems excluding participants when necessary, problems with the control groups and, last of all, problems with the tests and procedures performed.

The research group created the Endocrine and Metabolic Responses on Overtraining Syndrome (EROS) project which has encompassed a series of rigorously produced studies designed to methodically uncover biomarkers, etc.  It appears that they’re succeeding. (They are also, like Ron Davis and the Open Medicine Foundation, making their raw data publicly available.)

The four studies that led up to this overview paper (“Novel insights of overtraining syndrome discovered from the EROS study“) produced some fascinating insights. First off came a simple but important insight into how athletic training results in significant metabolic and endocrine changes, including some changes that the OTS group retained: even though they were ill, in some ways they were still “fitter” physiologically than the healthy controls.

Not so with some other measures. The OTS group had regressed in a wide variety of metabolic, endocrinologic, etc. measures. In fact, the group had fallen off the wagon to such an extent, so to speak, that their tests were similar – no doubt to their horror – to the inactive healthy controls. This indicated that the overtrained athletes had lost some of the “conditioning” that had enabled them to be athletic. (Conditioning in this context does not refer to lack of exercise, but rather to the biological state needed to carry out intense athletic activities).

Plus, the study uncovered some upregulated results which suggested an attempt to compensate for their “reduced conditioning”.

Interestingly, most of the over-trained athletes’ test results were within the normal range. No doctor would consider anything amiss with the apparently “normal” test results they displayed.

This brings up an interesting situation. We know that no matter how inactive a healthy person is, they do have the capacity to exercise and get stronger – a capacity the OTS athletes have lost. Yet their results appeared absolutely normal. This indicates that even a string of seemingly normal or within-range test results – put together – can result in disease! A redefinition of what’s “normal” is clearly needed.

OTS can be severe enough to affect one’s ability to carry normal, daily activities and, in some cases, can be irreversible.

Researchers associated with the EROS project have identified a number of endocrinological and metabolic abnormalites in OTS – many of which have been found in ME/CFS at one time or another.

Most of the test results are found within normal range limits but together they appear to identify a process which can severely restrict a person’s ability to exercise.

These researchers have also proposed a similar hypothesis to that proposed for ME/CFS: that people with OTS exist in hypometabolic state that’s designed to save energy resources during a time of severe energy depletion – as in starvation.

Overtraining syndrome is not actually caused by “overtraining”: instead it appears to be a condition that can occur to any athlete. Athletes with poorer sleep, who engage in high amounts of mental activity and who have lower protein and carbohydrate intake appear to be most susceptible.

No joint ME/CFS/OTS studies have yet been done but the two fields clearly have the potential to teach each other much.

It also suggests single test results do not nearly tell the story. Instead, it can take a constellation of abnormal (for athletes) but normal (for non-athletes) test results to produce an inability to exercise.

This theme – a constellation of seemingly minor but still significant changes working together to produce illness – is showing up more and more as medical research takes the performance of systems into account. 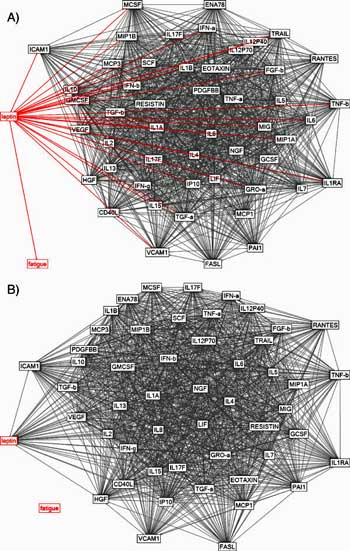 Younger’s results suggested that even at normal levels leptin may be a prime driver of immune functioning in ME/CFS.

We saw it in Dr. Klimas’s studies which identified immune hubs in ME/CFS that alter the importance a cytokine might have. In that scenario, even normal levels of a cytokine, could, if the cytokine is embedded in a hub which confers more importance on it, produce extraordinary changes. We’ve seen it in Jarred Younger’s Good Day/Bad Day medical study which suggested that, even at normal levels, leptin may be an important immune driver in ME/CFS.  We saw it in Dr. Montoya’s study, which found few significant increases/decreases in cytokine levels, but still found that even at their “normal levels”, cytokines still strongly predicted fatigue levels.

The fact that none of these studies produced results that would raise a red flag to a doctor – and that none of the changes seen in the OTS group were found in all the individuals – suggests that searching for the magic bullet in OTS is fruitless. Far better to look to identify a series of changes in a system, which together, end up in a significantly altered metabolic (or other) state.

When compared to their athletic peers, the study found a wide variety of significant alterations. They included:

Increased levels of creatine kinase and catecholamines (eg. norepinephrine/epinephrine) were also found and were believed to result from prolonged muscle recovery times and, with regard to the catecholamines, an attempt to stimulate the recruitment of energy.

Not all of the above findings in OTS have been reported in ME/CFS, but reduced testosterone (reported by doctors), blunted cortisol, increased estradiol, reduced growth hormone output, reduced metabolic rate and fat burning, reduced hydration (blood volume), muscle catabolism and hypometabolism have at one time or another been found in ME/CFS.

Given that most of the “abnormal” results in the OTS study were in the normal range, one wonders if a re-interpretation of past, seemingly negative results might be in order in ME/CFS.

However, while the changes from individual to individual differed, a general central effect was found – which led the author to advance a hypothesis – one which, they noted, needs to be validated by larger studies. That hypothesis, encouragingly, is similar to one that has arisen out of the metabolomic studies in ME/CFS.

It proposes that overtrained athletes are stuck in a hypometabolic state characterized by a “procatabolic environment”,  in which the overtrained athletes’ muscles (instead of fats) are being broken down. The “global reduction in metabolic pathways” found, they believe, may have been produced to save energy and redirect energy for essential pathways during a state of (energy) starvation.

While metabolomic studies do not appear to have been done in OTS, the ME/CFS and OTS groups appear to be arriving at a similar conclusion – a starvation-like state may exist – perhaps Naviaux’s Dauer state. Hypometabolism, catabolic environments and a starvation-like scenario have all been applied at one time or another to ME/CFS. Hypometabolism is believed be an adaptive state that humans or other organisms can enter into in response to a variety of triggers.  (Hypermetabolism has been proposed for ME/CFS as well!).

While the study focused on metabolic and endocrine factors, the authors proposed that virtually all the system dysfunctions found in the body (metabolic, hormonal, inflammatory, immunological, neurological, cardiovascular and psychological) have worked together synergistically to create a “dysfunctional hypometabolic” state found in OTS.

Interestingly, the researchers did not find overtraining to be a factor;  i.e. very high levels of exercise are not necessarily associated with OTS. Instead, they found that high levels of study (>8 hours/day); lower levels of carbohydrate, protein and total caloric intake, and poor sleep – in combination with athletic training – all increased the risk of coming down with OTS.

A Collaboration Waiting (Begging?) to Happen?

ME/CFS and OTS potentially have a lot to offer each other. Using a stringent methodology – one which has probably not been employed in ME/CFS – the EROS researchers have been able to uncover numerous metabolic and endocrinologic abnormalities.

I was unable to find, however, any maximal exercise or metabolomic studies – two areas ME/CFS is strong in. The recent paper from Gordon Broderick’s and Dr. Klimas’s groups, which integrates endocrine-immune modeling with extensive sampling during exercise, would surely interest these OTS researchers. The ME/CFS field is also becoming strong in mitochondrial studies – another area of potential interest in OTS.

This is a collaboration practically begging to happen.  Similar findings are cropping up in two mysterious diseases that are defined by the inability to exercise.  Maybe a session devoted to the similarities and differences between ME/CFS and overtraining syndrome at the next IACFS/ME conference coming up from June 10-13th at Stony Brook University on Long Island would help spark some collaborations.