In a ISEAI presentation, Dr. Mary Ackerley talks about how environmental stressors such as mold, pathogens and toxins can trigger neuroinflammation and produce the symptoms found in ME/CFS, FM and similar diseases. 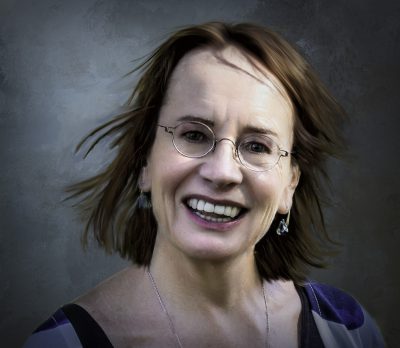 Ackerley is the President of the newly formed “The International Society for Environmentally Acquired Illness” (ISEAI), and a leader in the chronic inflammatory response syndrome (CIRS) field. In “Brain on Fire: The Role of Toxic Mold in Triggering Psychiatric Symptoms“, in 2014, she wrote about the patient who changed her approach to disease. Having grown up on the east coast, this now famous mold specialist had utterly dismissed mold at first. Every basement, she knew of, after all, reeked of mold.

But after a longtime patient showed up disheveled, confused and disoriented following a home renovation that uncovered mold, Ackerley decided to give mold medicine a try. Prescribing her cholestryramine, she was astounded to see her patient return back into the office several weeks later composed and back to her old self again.

Brain on Fire: Assessment and Treatment of Environmentally Produced Neuroinflammation

Ackerley spoke at ISEAI’s first international conference in Tucson last spring. ISEAI is a non-profit committed to raising awareness about the “environmental causes of inflammatory illnesses”.

Those illnesses include any that a biotoxin such as mold, or pathogens like Lyme disease and Epstein-Barr virus, or toxins such as pesticides, heavy metals, etc. can cause. They include chronic fatigue syndrome (ME/CFS), fibromyalgia, Lyme disease, mast cell activation syndrome (MCAS) and CIRS. ISEAI is not saying all cases of ME/CFS have an environmental origin but they would assert that many do.

She was there to inform doctors how to diagnose and treat people with environmentally acquired neuroinflammation.  (The video is not available unless you join ISEAI and get access to it for $50.)

A classically trained psychiatrist who believes that many people with inflammatory issues have been misdiagnosed, Ackerley first focused on the neuropsychiatric issues she so often sees.

I found it refreshing to watch someone dig into an area which is often understandably swept under the rug in our efforts to establish ME/CFS/FM as biological illnesses. I’m the first to say, though, that I was not same the person after coming down with ME/CFS/FM decades ago.

The kind of calm, emotionally stable, clear thinking person I was prior to ME/CFS virtually disappeared – replaced by an anxious, sometimes irritable and angry, ADHD-ish person subject to mood swings.  I fought against all of that and my work with Landmark Education definitely took the edges off for me, but the fact is that I lost a kind of grounding that I’d had.

So when Ackerley stated that about 100% of her patients have anxiety, I, with my difficulty relaxing, was on board. When she talked about “mold rage”, I got it. When she referred to “crippling OCD”, I could at least relate. When she stated that adverse childhood experiences (ACE’s) were common, I couldn’t relate, but knowing about ACE’s and their impact on inflammatory disorders, I could understand.

Her slide showing some of the cognitive and psychiatric symptoms found in her patient population rang a bell:

Asserting that the major causes of mood disorders are inflammation and infection, Ackerley, a psychiatrist, said she believes that at some point “we’re going to look back a psychiatry and see how primitive it was”.

She also provided some clues for detecting CIRS patients.

Many things from infections to mycotoxins, inflammation, autoimmune processes, mast cell activation, traumatic brain injury and concussions can get this process started. Once the microglia get started, it’s basically a brain-based immune process.

NeuroQuant to the Rescue

Ackerley’s big goal was to get doctors to use NeuroQuant to assess their patients. Despite their kind of new agey name, NeuroQuants are, thankfully, commonly used in the medical field – to assess the progression of diseases like Alzheimer’s, multiple sclerosis and epilepsy.

NeuroQuant is a software program that’s used on top of an MRI to assess brain atrophy. Shoemaker and Ackerley use it to assess parts of the brain that have become enlarged as well.  Shoemaker’s 2014 study found both atrophy and enlargement in different areas of the brain in people occupying water-damaged (moldy) buildings (WDB’s).

Ackerley uses NeuroQuants for a number of reasons, including to show doctors that the symptoms doctors assess as psychiatric are often due to toxicity in the brain. NeuroQuants also help her refute insurers’ and legal claims that patients are malingering. One wonders why they’re not used more in disability cases in ME/CFS.

The most important reason Ackerley uses NeuroQuants, though, is that they give her an indication where limbic system retraining can help. Ackerley’s pioneering didn’t stop at getting that environmental illnesses often cause symptoms mistaken as psychiatric in nature – she also embraces Annie Hopper’s Dynamic Neural Retraining System approach to environmental illness and encourages her patients to try it. Hopper suffered from severe chemical sensitivities at one point.

Ackerley wasn’t completely focused on environmental illnesses, though. She believes that traumatic brain injuries (concussion, blow to the head, car accident) are much more common than believed and produce the same kind of neuroinflammation. She referenced a former female soccer player with clear evidence of it (from heading the soccer ball). Remarkably, 50% of people with TBI may go on to develop psychiatric symptoms.

The Ring Of Suffering

A chief problem Ackerley finds EI (environmental illness) patients face is an unbalanced brain. In a healthy brain, the prefrontal cortex – the seat of “executive functioning” (the reasoning and planning center of the brain) – reins in the often fear-based limbic system.  Ackerley’s NeuroQuant scans, though, often show a double whammy in EI: prefrontal atrophy – sometimes tremendous prefrontal atrophy – combined with a jacked up limbic system. 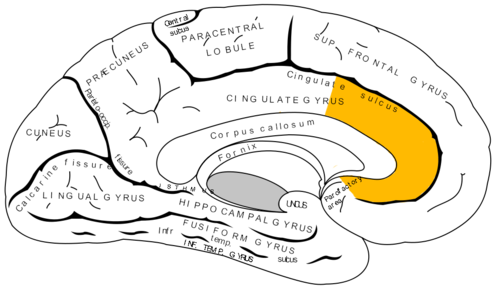 Ackerley focused on the anterior cingulate cortex, the part of the brain most closely linked with chronic pain. The connection between the anterior and posterior cingulate – the roadway between the frontal lobes and the limbic system – has been called the “ring of suffering” as problems with it have been associated with fatigue, depression, emotional dysregulation, chronic pain and anxiety, and fibromyalgia.

Ackerley pointed to three PET scan studies in ME/CFS, fibromyalgia and Lyme disease – as well as Younger’s ME/CFS thermography study – which have all highlighted the cingulate cortex.

Calling the amygdala the fire alarm of the brain, Ackerley related the story of one patient with a highly upregulated amygdala. She was trying to calm down using Annie Hopper’s DNRS program.  (The main problem with the DNRS has, apparently, been getting patients to incorporate it into their daily routine.)

Trying to demonstrate the impact an enlarged amygdala was having on her, Ackerley told her every time a little mosquito goes by, her amygdala goes bananas. She chose the wrong metaphor for this patient, though, who turned to her and said, “Don’t you know mosquitos carry Lyme, too”.

Totally wrapped up in the potential danger from mosquitos, the patient entirely missed the irony – but that’s what a hopped-up amygdala does. It sees danger everywhere.  Because so many sensations pass through the amygdala, virtually everything (foods, scents, supplements, toxins) can produce a fear response in a deranged amygdala.

Ackerley then demonstrated in greater detail how neuroinflammation works. First, the HPA axis triggers an increase in glucocorticoids (cortisol) and catecholamines (norepinephrine/epinephrine), which send the sympathetic nervous system into a fight/flight or freeze (see Porges) response.  At the same time that’s happening, the SNS’s (sympathetic nervous system) minder – the parasympathetic nervous system (vagus nerve) – takes a dive, causing the rest and digest system to punk out (bye bye sleep and hello gut issues). All that sets off immune dysfunction and oxidative stress.

The final piece of the puzzle is the “decreased cortical inhibition” which prevents the prefrontal cortex from coming in and telling the rest of your brain that “that mosquito really isn’t a big problem”. Without the prefrontal cortex bringing some sanity to the situation, that amygdala’s fear-based loop just goes on and on – stressing the system and yourself out more and more.

Although Ackerley didn’t mention it, our brains, even when healthy, are programmed to soak up fearful stuff. (This is why fear-based political campaigns are so effective ). This fear first response is thought to be an evolutionary adaptation to our brutal beginnings when predators did indeed lurk around every corner.

The seat of memory – the hippocampus – also plays a crucial role.  Ackerley didn’t mention this either but my understanding is that our brain’s assess every situation by referring back to past similar situations. We don’t assess or figure out everything newly; instead, we use the past to inform us about the present.

As the negative experiences pile up, we more and more use them to assess the present – solidifying the fear-based loop further. (Anne Hopper’s technique requires that patients revisit positive past experiences again and again in order to resolidify them in our brain and take us out of that danger loop.)

That puts the thalamus – the “back door” to the limbic system and a chief repository of mast cells – on high alert, amplifying any sensations (smells, sounds, foods, drugs, touch, body sensations) in a misguided effort to protect us.  (Ackerley’s NeuroQuants often show an enlarged thalamus.)

This is by no means a new hypothesis – it’s just better fleshed out now.  Back in 1993, Dr. Jay Goldstein in his book, “The  Chronic fatigue syndromes: The Limbic Hypothesis”, proposed damage to the limbic system lay at the heart of ME/CFS.  Dr. Paul Cheney amplified Goldstein’s focus in the “deep brain” – the limbic system (and now we would add the brainstem to that) –in his review of the book”

“Dr. Goldstein’s new book takes us to a place few people know well, and describes a plausible mechanism of injury to the deep brain which could explain every symptom seen in [patients with] chronic fatigue syndrome”

Goldstein described the book as a “promising foundation for future research” and here we are 26 years later, with brain scans validating Goldstein’s emphasis, and continuing to focus on the limbic system.

Warning that removing a person from mold exposure will not always be sufficient to return them to health and that remaining in a moldy environment will limit treatment effectiveness, Ackerley turned to a long, long list of possible treatments.

Besides Hopper’s DNRS which she mentioned earlier she starts everyone on:

Because 90% of brain detoxification occurs during sleep, you have to get people sleeping. Restorative sleep can greatly improve neuroinflammation.

The good news about the NeuroQuants is that they are usually paid for by insurers. She can get an MRI and NeuroQuant done in Tucson, if I got it right, for $350 (???).

In her ISEAI presentation, Mary Ackerley MD provided a compelling introduction to how environmental factors and pathogens can produce neuroinflammation and many, if not all, of the symptoms in ME/CFS/FM and similar diseases. She believes that many of the symptoms perceived as psychiatric can result from toxic exposures from mold, chemicals as well as infections.

Stating that sleep is essential, Ackerley provided numerous treatment recommendations including the Dynamic Neural Retraining System, and many supplements to combat to help with sleep and tamp down neuroinflammation and mast cell activation. She tries LDN, luteolin, PEA and VIP on everyone (see Treatment Takeways section. 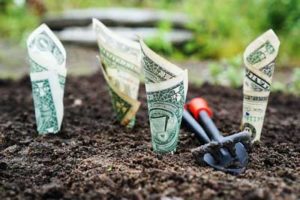 Whoa – as we enter the last week of the drive, 272 donors have gifted Health Rising with just over $30K.

From Mary Ackerley’s approach to mast cells to  brain and spinal issues to Hopper’s DNRS approach; if people with ME/CFS/FM  are benefiting from something we’re going to check it out.  If that kind of extensive, unbiased coverage supports you, please support us during the last week of our drive 🙂