Dominic reports on the new Phelix bacteriophage Lyme test his wife with ME/CFS tested positive on.

My wife has been ill for over seven years. She has done countless urine, feces, blood, breath, hair and saliva tests – effectively every available type of laboratory test across two continents. This included tests for Lyme and other tick-borne diseases with a specialist laboratory in the United States (ELISA, Western Blot, PCR, etc.).

Her test results have shown some abnormalities (e.g., gut dysbiosis, abnormal metabolites, poor mitochondrial function, adrenal insufficiency, impaired T4 to T3 conversion, etc.), but never a pathogen. Like so many people with ME/CFS, she has a complex illness without a clear origin – if only she had an identifiable “bad bug” to explain it all!

In March, my wife tried a newly developed blood test for bacteria of the borellia genus by Phelix. The result was *positive* for Borrellia miyamotoi (one of many “cousins” of Borellia burgdorfi, the well-known bacteria that causes Lyme disease). 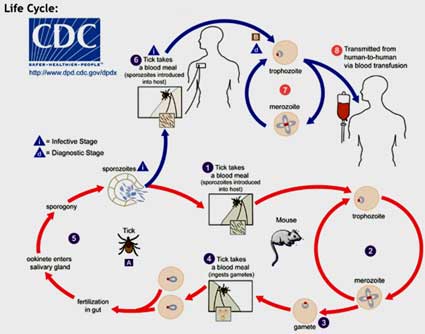 Borrelia life cycle (from the CDC).

B. miyamotoi was first identified in Japan in 1994, and is now known to be present in ticks with ranges across Russia, Europe, and the west and east coasts and the midwestern U.S.

Her doctor indicated that this pathogen could explain her very severe ME/CFS symptoms. We could hardly believe it!

The symptoms caused by tick-borne bacteria are varied: they “mimic” other diseases and can resemble ME/CFS or fibromyalgia — leading to questions over whether they are (at least in part) the same.

Why is this new blood test possibly a break-through?

Blood tests for tick-borne bacteria were (until now) unreliable. Indeed, conventional tests for tick-borne diseases – based on serological antibody measurements – may fail for patients who not produce detectable levels of antibodies in response to the infection. In addition, tests relying on the detection of bacterial DNA (i.e., PCR tests), may also return “negative” results because the bacterial DNA is not always present in blood samples. In sum: the previously existing tests have a high rate of “false negatives.”

Consequently, patients who have a tick-borne bacterial infection may not be diagnosed or get treatment. The US Department of Health and Human Services’ own Report to Congress from November 2018 serves as federally mandated “wake-up” call to the problem of vastly under-reported tick-borne diseases in the United States.

Moreover, those patients who were “lucky” enough to be diagnosed and treated for a tick-borne illness are sometimes (mistakenly) pronounced “pathogen free” based on “negative” post-treatment blood tests — despite still presenting symptoms. The medical community has been perplexed by the persistence of symptoms even after weeks of antibiotic treatment in a subset of patients – termed “Post-Treatment Lyme Disease Syndrome (PTLDS).”

“Lyme Literate Medical Doctors” (LLMDs) have for years been arguing that PTLDS patients are likely not pathogen free, but rather that blood tests fail to record “persistent” pathogens (see the book by Dr Richard Horowitz). Recent research on mice has indeed found evidence that tick-borne bacteria can persist even after weeks of heavy antibiotic treatment because they are protected by impenetrable “biofilms” and “cyst” formations. The new blood tests may prove the LLMDs right and validate continued antibiotic treatment of PTLDS patients.

So how does the new blood test work? 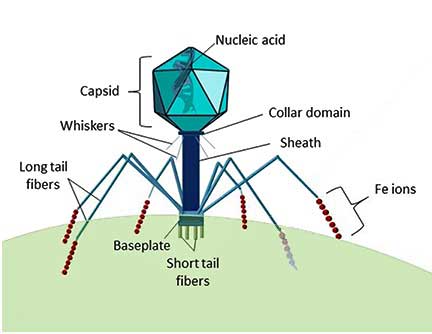 The structure of a Myoviridae bacteriophage.

The new blood test does not  test for the DNA of the tick-borne bacteria (which is not always present or very diluted in blood and thus easy to miss), but rather for the DNA of “phages”, which are simple life forms that live off of bacteria. Importantly, phages are tens to hundreds of times more common than the host bacteria and are specific to their hosts – which means that the presence of a certain type of phage DNA in your blood sample tells you which bacteria you have!

Another significant advantage to testing for phages (as opposed to antibodies) is that the presence of phages confirms that the bacteria are still present – antibodies don’t distinguish between current or past infection.

The phage-based test can currently only detect bacteria of the genus borellia. Its originators – researchers at Phelix R&D and the University of Leicester – are now busy expanding the test to other tick-borne bacterial genuses (e.g., babesia and bartonella). Phelix asserts their new phage-based PCR test is 50% more sensitive than other tests used.

Unfortunately, it is very difficult to rid a body of tick-borne bacteria: patients describe months and years of grueling IV and oral antibiotic treatments. Yet we are encouraged by recent trials that have had positive results on defeating “persistent” bacteria based on off-label uses of existing drugs (c.f. dapsone and disulfiram).

After years of searching, I am hopeful that this is a big step towards understanding and solving my wife’s very severe ME/CFS. I suspect that phage-based tests may also reveal hidden pathogens in many other ME/CFS patients.