“A Demon on My Life”: Online Play about ME/CFS to Air Soon

A demon on one’s life.

A top tier cast puts on an online play about ME/CFS.

What a ripe metaphor for chronic fatigue syndrome (ME/CFS). A demon – a kind of slippery, malevolent, unearthly being – difficult to get one’s hands on. Difficult even to see… On one’s life. Not around one’s life but on it, pushing it, like the force of gravity, down.

And keeping the main character of the play, a dancer, from taking flight, from reaching heights, that perched up on her toes, few humans could ever imagine reaching … Being that athletic, that graceful, that strong. And now all that is disappearing.

It’s a Broadway play about ME/CFS. I asked the director, JB Bruno, how he came to create a play on ME/CFS.  He reported that after years of producing films, in 2019, he decided to go back to his first love – the theater.

After directing a couple of plays that required some significant editing, he felt it was time to pick up his pen and write an original work. A friend from many years ago, who was dealing with Myalgic encephalomyelitis/chronic fatigue syndrome (ME/CFS), piqued his interest.

“I started researching and watching documentaries. Three things struck me most about the disease that made it different from others: it was very much misunderstood, it was often misdiagnosed, and compared to other diseases, it was significantly under-funded. All this for a disease whose origins are still disputed today and that right now has no cure in sight. ”

“This was clearly the story I needed to tell. “

But how to tell it? His mind drifted to dancing. He’d spent a lot of time with dancers and knew how intimately they knew their bodies, how much they relied on them, how much they enjoyed them.

What better vehicle, he thought, to explore the wrenching struggles associated with this disease.

Plus, as a bi-lateral amputee below-knee, he was also interested in exploring the caregiver relationship. “How do you provide”, he asked, “for a lover whose illness has no cure and for whom trying to get better only makes it worse?”

It took him a year of research and writing, including a staged reading in front of a live audience in January of 2020, to get to where we are now – a live online performance via Zoom on the 20th and 22nd. 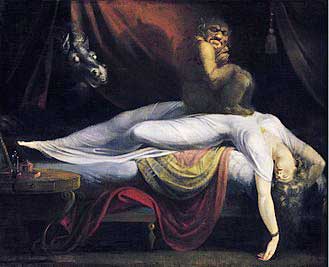 The title was prompted by the 1781 painting “The Nightmare” by John Fuseli.

JB noted how appropriate an online performance is “as for many with ME, the internet is their main, and sometimes only, connection to the outside world.”

The title of the play, “A Demon on My Life”, was inspired by a dramatic 1781 painting by Henry Fuseli called “The Nightmare.”  The image recalls a kind of sleep paralysis that a character in the play has, but more so it’s about this mysterious demon hovering over and challenging two dancers, a husband and a wife, one of whom has ME/CFS.

The actors are top tier. Darren Lee has been acting, directing and choreographing works on Broadway for 18 years. He’s worked in some of the biggest productions including Chicago, Guys and Dolls, Miss Saigon and Victor/Victoria (with Julie Andrew).

Blanche Baker won an Emmy Award for Best Supporting Actress for her work in the television mini-series Holocaust. She’s originated several roles including, as a 24 year old, Edward Albee’s adaptation of Lolita, and Shelby in Steel Magnolias. She’s played roles in dozens of TV shows and movies.

Leigh Fitzjames,  a producer/writer/actor/singer plays the lead role – a dancer coming to grips with the fact that her fibromyalgia/chronic fatigue syndrome will no longer allow her to do what she’s been able to do. Knowing this is a difficult subject to get right, she stated: “we have done our best to research CFS stories and facts thoroughly”.

You’re invited to see a live online production of “A Demon on My Life”:

Use form at this link to RSVP – and get your free online ticket.

The company plans to do a theatrical run in New York when the theaters open again. At that time, they hope to have the funds to do another livestream performance for people with ME/CFS.

Donations to support the further production of the play are welcome. 10% of all donations will go to support the work of the Solve ME/CFS Initiative.