Could Neuroinflammation Be Triggering the Cortisol Issues in ME/CFS and Fibromyalgia?

“Therefore, in this study, we hypothesize that understanding cortisol patterns in both these syndromes may be a crucial factor in characterizing FMS and CFS.” The authors

More than any other substance, cortisol demonstrates how integral a role the stress response plays in the functioning of our body.  Our main stress hormone, cortisol is best known for the role it plays in jacking up our fight or flight system, but this versatile substance also affects our metabolism, tamps down inflammation, regulates blood pressure, affects glucose levels, and even impacts our sleep/wake cycle.

Cortisol is clearly something we would want our body to get right.

Most ME/CFS studies have found low morning salivary cortisol levels but these researchers, hailing out of the University of Houston, as well as two top research institutions – UCSF and Vanderbilt – think that may not be the end of the story.

The idea that one-and-done measurements can tell us much have been taking a beating lately. Because cortisol is secreted according to a circadian rhythm, the authors asserted that that rhythm – which is unique to each individual – must be taken into account. They believe that asking whether we have too much or too little cortisol is much too simple a question for this dynamic hormone.

They threw the kitchen sink at these two diseases, assessing cortisol secretion patterns, timings, amplitudes, and the number of the underlying pulses, as well as infusion and clearance rates – and they did that every ten minutes for 24 hours.

While the daytime cortisol levels were similar to healthy controls, things went a bit haywire during the night.  With their crappy sleep, night isn’t the best time for people with ME/CFS and FM – but this study suggests it may be a good time to assess biological factors.

The researchers’ recent study produced a split between FM and ME/CFS: cortisol appear to be dysregulated in both diseases, but in different ways.

Cortisol was not being cleared, or taken up, by FM patients’ cells as quickly as it usually is. That extra supply of cortisol resulted in cortisol being pulsed through the system fewer times and at lower levels than usual compared to the healthy controls.  That was an indication of “blunted feedback signaling”; i.e. cortisol production was not shut down when it should be and tended to go on longer than normal in FM patients.

When hormones like cortisol become overly available like that, the glucocorticoid receptor that usually responds to it may start ignoring it. The authors believed this could explain the blunted inhibitory feedback other studies have found.  It could also be bad news for tamping down inflammation and pain control.

If the glucocorticoid receptors on FM patients’ immune cells turn a blind eye to cortisol, they may keep the pro-inflammatory cytokines that produce pain. Inflammation could run amok, producing longer than normal periods of pain – and perhaps sensitizing the pain neurons. One study found evidence of a blunted anti-inflammatory response to exercise.

Fifteen years ago a study found “strong relationship” between cortisol levels and pain early in the day in FM. Other studies have clearly shown a relationship between balky cortisol production and increased pain sensitivity. Cortisol is definitely a player in FM: how big a player it is – we don’t know.

ME/CFS patients, on the other hand, had more secretory events than usual, but produced lower levels of cortisol during the early morning hours compared to the healthy controls. That suggested that the increase in secretory events was a (failed) attempt to compensate for the low cortisol levels present. As cortisol should pump some energy into us as we wake up in the morning, the low cortisol could contribute to the early morning blues and perhaps even the pain people with ME/CFS often feel at that time.

This study also found that people with ME/CFS/FM exhibited an ultrasensitive cortisol response characterized by more rapid or more sustained release of cortisol during the night. The authors called this unusual response a “high sensitivity phenotype”. That wouldn’t seem to jive with better health, but it may have been there for a reason: the study also found that the ME/CFS/FM patients who produced more cortisol (per unit of ACTH) at night had reduced symptoms.

That authors speculated that that “high sensitivity phenotype” may be helping the ME/CFS/FM patients to counter-balance high levels of neuroinflammation.

Cortisol is produced according to a circadian rhythm. It hits rock bottom during the early evening – a good time for a stress response hormone to shut down – and then climbs to a peak in the morning. The study found that a quicker cortisol rebound at night was associated with better sleep in the healthy controls. That pattern, though, was completely missing in the FM and ME/CFS patients. A quick cortisol rebound didn’t improve ME/CFS/FM patients’ sleep at all. It was another indication of something broken in this system.

The Other Overactive Stress Response 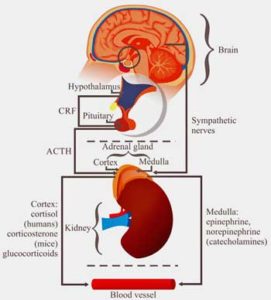 HPA axis and the stress response.

This isn’t the first study to suggest that an overactive stress response may be wreaking havoc with sleep in ME/CFS and FM. A Several Australian studies and the CDC  found that sympathetic nervous system activation was associated with poor sleep in ME/CFS. In fact, SNS activation was the only factor an FM study could link to poor sleep. When the Aussies added an exercise session in the ME/CFS patients, SNS activation increased at night. The 2007 CDC study went the farthest tying together a batch of factors:

“… the presence of increased HR and reduced HRV in CFS during sleep coupled with higher norepinephrine levels and lower plasma aldosterone suggest a state of sympathetic ANS predominance and neuroendocrine alterations”.

The authors didn’t offer any treatment options other possibly mineralocorticoids, but are going to add ACTH – the factor responsible for synthesizing cortisol – to their modeling efforts. Way back in 2008, though, a study suggested that intranasal insulin, of all things, was able to reduce hyperactivity of the HPA axis. How it would affect people with ME/CFS – who have increased secretory events, but reduced cortisol production in the early morning hours, or FM patients, with their reduced cortisol clearance – is unclear.

A recent and sure to be controversial study also reported that hydrocortisone pills allowed people with fibromyalgia, ME/CFS, rheumatoid arthritis, neuropathy and/or many other disorders, to achieve a “minimum symptom state” via control of inflammation.

The authors characterized the ME/CFS/FM group as a whole as having a “high sensitivity phenotype”; i.e they either produced cortisol more rapidly (ME/CFS) or produced it for longer periods (FM). Since individuals who produced more cortisol (per ACTH production) had reduced symptoms, they proposed that the HPA axis was attempting to tamp down neuroinflammation at night.

Since the receptors that respond to cortisol tend to ignore the hormone when it is too present, it’s possible that cortisol is not tamping down inflammation as it should – resulting in increased pain in FM patients. The low clearance rate also appeared to retard normal cortisol production, with the FM patients showing fewer and smaller secretory events.

Time will tell how important or not important these findings are but the study does provide more evidence of HPA axis abnormalities in these diseases. It bears noting that these researchers have twice gone to extraordinary lengths – doing blood draws every ten minutes for 24 hours – to assess cortisol/ACTH levels.

Leslie Crofford, one of the co-authors, has been studying cortisol on and off in these and other disorders for years. Back in 1996, she reported that “Patients with FM exhibit disturbances of the major stress-response systems, the HPA axis and the sympathetic nervous system”, and that “FM patients display a unique pattern of HPA axis perturbation“.

She stated that “Many clinical features of FM and related disorders, such as widespread pain and fatigue, could be related to the observed neuroendocrine perturbations”, and that “Further clarification of the role of neuroendocrine abnormalities in patients with FM, and the relationship of these disturbances with particular symptoms, may lead to improved therapeutic strategies.” It’s crazy that 25 years later we’re still waiting.

The authors didn’t provide treatment suggestions, but are now going to dig into patterns of the ACTH – the hormone that tells the adrenals to produce cortisol.