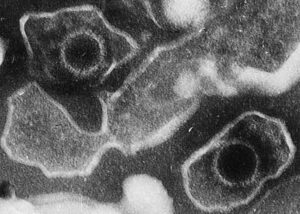 No one suspected a 50 year old kidney drug called spironolactone might hold the key to a new generation of herpesvirus drugs.

University of Utah researchers hoped their new assay might uncover a new way to treat EBV infections – but they were shocked at what it turned up. How could a 50 year old kidney drug called Spironolactone have anything to do with EBV?

Four years later they knew how – and the possibility for a more effective drug to treat herpesvirus infections was borne.
The moral to this story – you never know where an answer may come from. It could even be sitting on an aisle in your pharmacy.
Find out more in a Simmaron Research Foundation sponsored blog:
Old Drug Points To New Way To Knock the Epstein-Barr Virus Down