(Apologies for two email blasts for those who got them. We had a scheduling mix-up)

A study seeking to uncover a diagnostic biomarker for chronic fatigue syndrome (ME/CFS) that you can participate in from your home?  That was unexpected.

I had never heard of Dxterity or the CHROME (CHRonic fatigue syndrOME) study until a couple of days ago. The company – a biological diagnostic company based in Los Angeles – has four other studies underway. Besides their catchy titles, the studies had two things in common: they were all focused on more cheaply and effectively monitoring autoimmune diseases.

Dxterity is doing that by honing in on the same part of the genome that powered the spectacularly successful Pfizer and Moderna vaccines. The new mRNA vaccines vanquished the need to inject a weakened or dead form of the virus into a person.  Instead, by using mRNA to send a message straight to the immune system, the new vaccines are producing a precise and effective immune response.

As Jim Gilly explained, its messenger RNA (mRNA) – not DNA – that does the actual work in the cell. Our DNA may provide our genomic template, but mRNA is where the action is. Jennifer Doudna and Emmanuelle Charpentier won the 2020 Nobel Prize in Chemistry for figuring out how to use mRNA to edit (using CRISPR) our genes.

Dxterity is using RNA in the CHROME study in another way. It believes that tracking the changes in RNA expression provides a cheaper and more effective way to diagnose and treat diseases. Its three autoimmune disease efforts underway, for instance, use RNA analyses to more precisely monitor the health of people with these diseases – and at a much reduced cost.  Using changes in gene expression should, for instance, enable patients to catching disease flares earlier, and be treated more effectively.

The mRNA Revolution Comes to ME/CFS 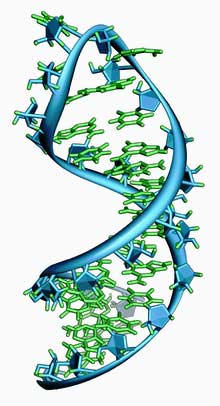 The CHROME ME/CFS study will be assessing mRNA (picture), metabolites and DNA

ME/CFS is obviously different. It has no validated treatments. Finding a diagnostic biomarker, on the other hand, is near the top of just about everyone’s list – and that’s what Dxterity hopes to do with this study.

By using the same approach which has uncovered what they believe are diagnostic biomarkers for lupus, multiple sclerosis, and rheumatoid arthritis, they hope to do the same for ME/CFS.

Time will tell, of course, if that will work.  A lot will depend on the genes, metabolites, etc. they’re looking at. Other ME/CFS studies have looked at more genes, or more metabolites, or more DNA, but none has attempted to put all three together in the manner that Dxterity has.

Dxterity appears to recognize what they’re getting into. Gilly described the ME/CFS term as a kind of “broad descriptor” which may contain many different subsets. Still, they feel that ME/CFS is ripe for this kind of analysis.

For one, it appears to be an inflammatory chronic disease, possibly with an autoimmune component – and that’s pretty much Dxterity’s bailiwick. They believe their RNA testing gives them a particularly good window into immune disorders.

The ME/CFS study will assess the expression of approximately 50 genes, 18 metabolites, and some DNA. A small questionnaire is also involved.

Because Dxterity has developed a proprietary way to preserve the very fragile mRNA without the need for refrigeration they’re able to bypass labs (thus reducing costs) and can send the kit straight to your home. The study simply requires a finger stick for blood, a small urine sample, and filling out a brief questionnaire.

Besides possibly forwarding the science for ME/CFS, you’ll get a $50 thank you Visa card for your trouble.

Their target is 200 participants.  After they get the samples, it will take several months to tease out what the data is telling them. They emphasized that this is an exploratory study. Nothing is guaranteed.

I had the impression that the Bristol Squibb Meyers (BSM) drug company was directly involved. It isn’t but Gilly said BSM does have some possible therapies it believes could apply to ME/CFS.

Whether or not the study works it’s great to see a diagnostics company taking a stab at ME/CFS. The study is open to U.S. residents.

(Health Rising is not affiliated with Dxterity in any way.)