Is FibroCOVID a Real Thing? Plus Small Fiber Neuropathy Found in Long COVID

Are men being left out? Is the gender balance overstated in FM?

That seems strange. Fibromyalgia appears to strike the same general demographic as ME/CFS and long COVID: patients tend to be fairly young and female.

That overt female dominance in FM, though, may be due more to physician bias than anything else. A 2018 study that took physician bias out of the picture concluded that only 59% (as opposed to figures as high as 90%) of fibromyalgia patients were women. The bias, if it is there, is probably due to doctors with confirmation bias, who, believing the FM is primarily a women’s disease, find it more in women and less in men than they would otherwise.

A recent study, “Fibromyalgia: a new facet of the post-COVID-19 syndrome spectrum?”, featured a web-based survey. Web-based surveys aren’t the most accurate surveys, but they’re being commonly used, and researchers have gotten better at creating them. An Italian group required that participants report they had had a positive COVID test, and had been diagnosed with COVID-19 by a doctor, and had gotten sick with COVID-19 at least three months prior to taking the survey. Six hundred and thirteen people completed the survey.

Given the demographics seen thus far in long COVID, it was not surprising to see that most (78%) were women, the average age was 45, and 11% had been hospitalized. Except for the 5% with inflammatory arthritis, few musculoskeletal issues were reported prior to coming down with long COVID.

While this study did find more people with long COVID and fibromyalgia in women, the disparity between women and men (57-43%) was not that great, and was similar to the proportions found in the 2018 study mentioned above. Men who ended up having FM and long COVID, in fact, tended to fare worse than women: they had higher rates of hospitalization and more often needed to be treated with oxygen.

A similar kind of bias may exist with regard to ME/CFS and FM. Since doctors are more familiar with FM than ME/CFS, they may be more likely to diagnose FM when they meet up with a patient with symptoms of pain, fatigue, cognitive and sleep problems.

Thirty-one percent of the long-COVID patients (average duration 6 months) met the criteria for FM. Several risk factors for coming down with a fibromyalgia form of long COVID were unearthed. Interestingly, given reports that most people who come down with long COVID have not been hospitalized, being sick enough to have been hospitalized and received oxygen increased the risk of being diagnosed with fibromyalgia. So did having a higher body mass index, being obese, and having high blood pressure. Experiencing cough and difficulty breathing during the infections were less significant risk factors.

Obesity has been talked about quite a bit in FM, but is it actually more prevalent in FM? Given the pain and physical limitations FM produces, perhaps one would expect it to be. A meta-analysis concluded that the overall rate of obesity in FM was 35.7%, with the rates of obesity higher in the U.S. Compare that, though, to a CDC study, which found the prevalence of obesity in all U.S. women 39.7% (aged 20–39), 43.3% (aged 40–59), and 43.3% (>60 years).

While obesity does increase one’s chances of coming down with FM after getting COVID-19, obesity doesn’t appear to be more prevalent in FM itself. The fact that obesity may increase one’s chances of getting an FM brand of long COVID is probably not surprising, as obesity probably increases the chances of all sorts of complications from COVID-19. Obesity, after all, negatively impacts many disease outcomes and may almost be as bad for your health as smoking.

The author’s ideas about why COVID-19 might be producing an FM form of long COVID were nothing new, and basically mirrored other ideas about long COVID: virus-induced damage to the endothelial cells lining the blood vessels or the neuromuscular structures, immunological changes and smouldering inflammation.

The authors believe FibroCOVID is going to lead to more work for rheumatologists.

“it is reasonable to forecast that rheumatologists will face up with a sharp rise of cases of a new entity that we defined ‘FibroCOVID’ to underline potential peculiarities and differences, such as the male involvement.”

The authors asserted that long-COVID clinics and doctors should include easy FM assessment tools, such as the Fibromyalgia Rapid Screening Tool or the London Fibromyalgia Epidemiology Study Screening Questionnaire, to determine if FM is present.

Perhaps we should, as some physicians have recommended, view ME/CFS and FM as similar diseases that occur on a continuum. That entire disease entity would affect from three to possibly over 10 million Americans. (ME/CFS: 1-2 million; FM: 2-10 million). That’s a lot of people who could benefit from insights and treatment options gathered from long-COVID research. For instance, the authors noted that immunotherapies not being used in FM will likely come into play for long COVID.

For their part, people with long COVID may be able to benefit from insights into fibromyalgia as well (see below).

Talk about a fibromyalgia connection. Small fiber neuropathy or in the case of fibromyalgia, polyneuropathy, was first uncovered in FM in 2013.  Since then, dozens of studies have validated its presence in somewhere around 40% of FM patients. It took quite a while, but recently a study confirmed that small fiber polyneuropathy (SFPN) is present in chronic fatigue syndrome (ME/CFS) as well. Now, a research group that’s assessed SFPN in fibromyalgia has moved on to long COVID.

This study (“Corneal confocal microscopy identifies corneal nerve fibre loss and increased dendritic cells in patients with long COVID“) gave 40 long-COVID patients several questionnaires, including a National Institute for Health and Care Excellence (NICE) Long-COVID Questionnaire, which contains a neurological section and the Fibromyalgia Questionnaire (FM-Q) to assess the severity of muscle pain and other symptoms. The neurological section of the NICE questionnaire asked about symptoms like brain-fog, headache, sleep problems, dizziness, taste or smell problems and tingling sensation. They used a non-invasive laser scanner to assess nerve density in the cornea of the eye.

Check out the broken up small nerve fibers in the FibroCOVID patient in the middle.

Because only the skin or the corneas of the eyes have been tested, we don’t know the extent of the small nerve fiber problems in fibromyalgia, ME/CFS or long COVID. It’s been speculated that small nerve fiber problems found elsewhere could be affecting the microcirculation, contributing to orthostatic intolerance, affecting gut issues, etc. The range of possibilities is large – and quite speculative at this point. Despite several efforts, no one has been able to identify the cause of the SFPN in FM.

Echoing Dr. Nath’s assertion that a very aggressive innate immune response may be responsible for the inflammation seen in COVID-19, the authors stated that the small nerve fiber losses were “consistent with an innate immune and inflammatory process” caused by activated dendritic cells migrating into the cornea. It should be emphasized that this problem does not impair vision, and no sight problems have ever been associated with reduced small nerve fibers in the eyes of FM patients.

There was also some good news. In contrast to other nerve fibers, small nerve fibers can repair themselves, and some evidence suggested this was occurring. As noted above, some of small nerve fiber findings seen at 4 weeks began to rebound at 12 weeks.

The authors noted that COVID-19 patients diagnosed with another small nerve fiber diseases (Guillain-Barre Disease) did well with plasma exchange, which has been mentioned before in terms of long COVID. Plasma exchange or plasmapheresis involves replacing the plasma (liquid portion of the blood) with a substitute. It’s not curative but is used in a variety of autoimmune and neurological diseases to relieve symptoms. 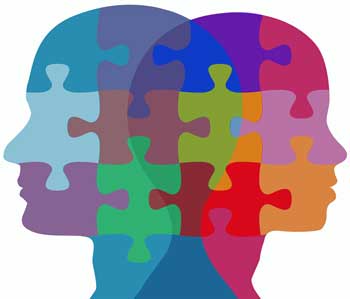 Two studies suggest FibroCOVID is a real and pertinent part of long COVID.

We definitely need bigger and better studies, but these two early studies linked long COVID and fibromyalgia together in two ways: their symptom presentation and small nerve fiber damage. That made sense. Fibromyalgia has kind of been the missing disease in the long-COVID constellation of diseases, but its strong overlap with ME/CFS, and its sometimes post-infectious onset suggests that it’s going to pop up. The authors asserted that doctors should assess the presence of “FibroCOVID” in long COVID using readily available standardized questionnaires.

The symptom study found that far more men had FibroCOVID (45%) than one would have suspected given the reports of a very strong female predominance in FM. The authors note, though, that physician bias likely plays a role in over-estimating the female predominance in FM, and believe their figures are more accurate. One wonders if better long-COVID studies will lead to a reassessment of the gender imbalance often reported in FM.

While the study did not report percentages, it did indicate that neurological symptoms were common in long COVID, and were associated with the presence of reduced small nerve fiber density/length in the corneas of the eyes. They were also associated with increased symptom severity.

On a good note, small nerve fibers can regenerate themselves, and some improvement was found in 8 weeks. The authors also reported that plasma exchange has been helpful in long-COVID patients diagnosed with another nerve fiber disease (Guillain-Barre), and noted that immune therapies not currently used in FM might prove helpful in FibroCOVID.