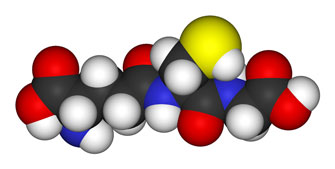 Glutathione is the main antioxidant in the body. Its levels may be depleted in ME/CFS and FM.

is the primary antioxidant in the body. Glutathione (GSH) mops up reactive oxygen species (free radicals, lipid peroxides, and heavy metals) that can cause cellular damage.  Glutathione also participates in numerous other important processes in the body including DNA synthesis and repair, amino acid transport, enzyme activation, prostaglandin synthesis, iron metabolism and cell differentiation and death.

Glutathione deficiencies appear to be common in central nervous system diseases (chronic fatigue syndrome, multiple sclerosis, Parkinson’s Disease, Alzheimer’s, autism, depression). The fact that GSH depletion is one of the earliest brain abnormalities in Parkinson’s has led to several studies assessing the effects of intranasal GSH supplementation in that disease.

One study found intranasal GSH supplementation quickly increased brain GSH levels in Parkinson’s by 240 percent. A short-term 2017 study, however, did not find that intranasal GSH produced better results than a placebo effect, which turned out to be quite high.  (The authors suggested that a longer term trial take place.)

Because bioavailability of oral glutathione is low, doctors often supplement with its precursors such as cysteine. Other antioxidants such as vitamin C that appear to work work synergistically with glutathione are often included.  N-acetylcysteine (NAC) and alpha lipoic acid (ALA) are also used to increase GSH levels.

The oral availability problems with glutathione may be able to be bypassed by providing it intramuscularly via injection, by using a nebulizer, using it intranasally or via cream. Even GSH suppositories are available. A 2013 survey suggested that intranasal GSH is well tolerated.

Four studies have found indirect evidence of glutathione reduction (via increased lactate levels) in fibromyalgia and three in chronic fatigue syndrome (ME/CFS).  Reduced levels of glutathione have repeatedly been found in the ventricles of the brains of ME/CFS patients.  Increased levels of oxidative stress have consistently been found in both ME/CFS and fibromyalgia.  Several studies finding evidence of increased levels of free radicals called isoprostanes suggest problems with the antioxidant system in ME/CFS are present.

Dr. Shungu proposes that oxidative stress-caused neuroinflammation plays a key role in both fibromyalgia and ME/CFS.

Theresa Dowell DPN, who has ME/CFS, reported that Dr. Klimas finds that that intranasal glutathione provides about 90% of her patients approximately a 20% improvement in fatigue and cognition.  Most patients notice improvement in 6-8 weeks but a three-month trial is called for. Dr. Dowell found intranasal glutathione helpful for herself and is tracking its effectiveness in her patients. She avoids IV pushes of GSH because of potential side-effects.

At the 2016 IACFS/ME conference, Dr. Shungu, a researcher – not an MD – demonstrated that NAC supplementation (1800 mg/day for four weeks) not only reaches the brain but was able to significantly reduce brain free-radical levels, increased GSH levels, and improved symptoms. Richard Deth is studying whether liposomal glutathione is effective in restoring natural killer cell functioning in ME/CFS.