The neuroinflammation findings in chronic fatigue syndrome (ME/CFS) and fibromyalagia (FM), while restricted to a few studies, are still pretty compelling. We know that many, if not all of the symptoms associated with ME/CFS and FM such as fatigue, pain, cognitive problems, and mood issues can be produced by the brain.

But how to treat the brain? Getting compounds into the brain is not easy. For one thing, when taken orally they must enter into the general circulation, get broken down by the liver, and then surmount the blood-brain barrier (BBB) – a circuitous route. 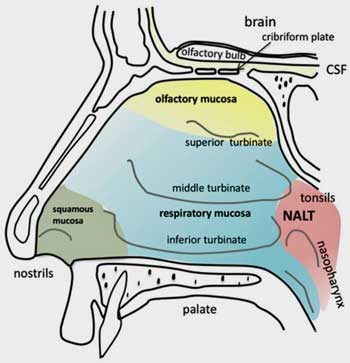 The nose provides quick entry to the brain. Could intranasal delivery represent the future for ME/CFS and FM?

There may be an easier route. The brain’s only direct contact with the outside world comes through the nose. There’s no blood-brain barrier to worry about. Anyone with a bloody nose has direct experience of how well vascularized the nose is. Plus, stimuli from the nose don’t go through a peripheral nerve intermediary as do all other stimuli – they shoot straight into the brain.

Intranasal.net reports that absorption rates through the nose are similar to those achieved during intravenous infusions. It asserts that atomized pumps provide better delivery systems than nose drops, plastic bottle nebulizer and pressurized aerosols.

Given the more direct drug delivery route, intranasally delivered drugs have the potential to be more potent, work more quickly, be better targeted, produce less side effects and be more effective overall.

One review of the field stated that “intranasal drug delivery has emerged as a reliable method to bypass the BBB and treat neurological diseases.”

It’s not a done deal, though.  Anything which irritates the mucosal lining of the nose wouldn’t be tolerated, congested nasal passages could inhibit delivery, and it’s not clear how far or where into the brain the substances might reach. If intranasal administration works, though, it might just be the ticket for cooling the fires in the brain.

In ME/CFS, cooling the fires of the brain means upping the levels of the master antioxidant of the body – glutathione.

Shungu’s findings suggest that high levels of reactive oxygen species (ROS) and low levels of antioxidants (glutathione) are part of the neuroinflammatory mix in the brain in ME/CFS. If that’s true, then ME/CFS is not alone – low levels of glutathione have been implicated in many central nervous system diseases (multiple sclerosis, autism, Alzheimer’s disease, Parkinson’s disease, schizophrenia, and bipolar disease) as well. 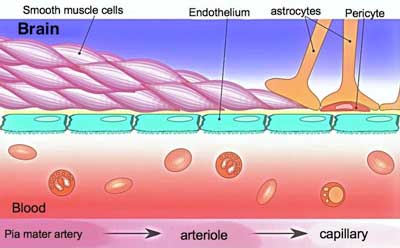 The blood-brain barrier prevents the delivery of many drugs to the brain.

Glutathione – the “master antioxidant” – scavenges or neutralizes reactive oxygen species such as the hydroxyl radical (*OH) in central nervous system cells, and plays a role in detoxification and other functions. If not enough glutathione is being produced relative to the oxidative or free radical load present, then the free radicals, seeking balance, will rip holes in the neighboring cells and neuroinflammation will occur.

But how to tamp down those fires? Taking glutathione in orally will not do it – its bioavailability is too low. Liposomal and sublingual forms and creams have more availability and N-Acetylcysteine (NAC), a precursor, can cross the blood brain barrier, although it has to go through the general circulation first. Infusions of NAC can, however, increase brain GSH levels dramatically.

With its ease of use, intranasal glutathione could be the best option. 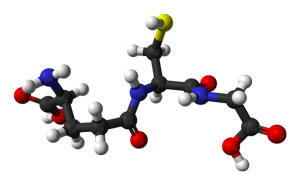 According to one report, intranasal delivery of glutathione in aerosolized form is believed to have begun in 2003 when a compounding pharmacy in Florida began providing it to people with multiple chemical sensitivity (MCS). The pharmacy later provided it to people with Parkinson’s disease, Huntington disease, chronic sinusitis, Down syndrome, and autism. (Intranasal glutathione is compounded.)

A survey suggested it was well tolerated. The most frequently reported benefits across a variety of diseases included improvement in disease symptoms (45.5%), improved sense of well-being (28.8%), decreased frequency of sinus infections (27.3%), and improved energy (24.2%).

Intranasal GSH has been formally studied only in Parkinson’s disease (PD), a disease characterized by early glutathione depletion. Stymied by the low amount of GSH reaching the brain when given orally, researchers turned to intranasal administration. A 2016 study confirmed that when taken intranasally, compounded GSH does indeed increase brain glutathione levels. A 2017 Phase 2 trial, did not, however, find that intranasal GSH was more effective than placebo. (The authors noted that the placebo response was, however, especially strong.)

Theresa Dowell DNP, who has ME/CFS, reported, however, that both she and Dr. Klimas have found that intranasal glutathione helps in about 80 – 90% of their patients – producing about a 20% improvement in fatigue and cognition.  Most patients notice improvement in 6-8 weeks but a three-month trial is called for.

She prescribes compounded intranasal glutathione, 250 mg/ml, two sprays in each nostril three times per day.  (Dr. Klimas uses the Key Compounding Pharmacy in Seattle). For patients who have trouble breaking down sulfur metabolites, Theresa starts them on a very low dose and slowly work up to 200 mg per day – about a third of the dose used in the Parkinson’s study.

Insulin Resistance in the Body

Insulin regulates blood sugar (glucose) levels in the body. While insulin resistance per se – which allows glucose levels in the blood to rise to dangerous levels – hasn’t been found in chronic fatigue syndrome (ME/CFS), an exercise-related insulin resistance which was ameliorated by metformin did show up in cultured muscle cells from ME/CFS patients. Metformin also improved mitochondrial functioning (AMPK) in fibromyalgia muscle cells.

Several studies suggest that insulin resistance may play a significant role in fibromyalgia including one which associated it with memory issues. Metabolic syndrome, which is associated with insulin resistance, has also been found at various times in both FM and ME/CFS.

Insulin Resistance in the Brain?

While we’re more used to hearing about insulin’s effects on the body, researchers are learning that insulin plays a major role in  memory formation as well as protein, lipid, and carbohydrate metabolism in the brain.

In “The High Costs of Low-Grade Inflammation“, Dantzer points out that during chronic inflammation, insulin resistance in the brain decreases glucose and protein metabolism in the astrocytes, forcing the neurons to rely more heavily on the less efficient process of lipid metabolism for energy.

A recent study found reduced glucose metabolism exactly where one would expect – in the thalamo-limbic-brainstem regions in women with “functional somatic syndrome” – a category used by some to describe ME/CFS and similar diseases. The authors asserted the women were suffering from “cerebral hypometabolism”.

Reduced levels of insulin in the brain also contribute to the deposition of some really nasty substances (amyloid proteins, neurofibrillary tangles and tau proteins) and neurodegeneration. Central nervous system insulin issues have been linked to Alzheimer’s, and type 2 diabetes.

While ME/CFS and FM might get lucky with a new drug (such as Cortene), the most likely quick advance in treatment, given the poor funding the field receives, will come from other diseases which share issues. The good news is that neuroinflammation is a big deal in central nervous system diseases, and benefits from fighting it in those diseases may very well accrue to people with ME/CFS and FM.

Intranasal administration of treatments is nothing if not a growth field. Glutathione and insulin are just two of the many intranasal compounds Parkinson’s and Alzheimer’s researchers are checking out. Both groups appear to be throwing just about every compound they can think of up the noses of their laboratory rodent models, and some compounds are making it to human trials as well. Anything, it seems, to get a drug or compound past the blood brain barrier to the heart of the problem. 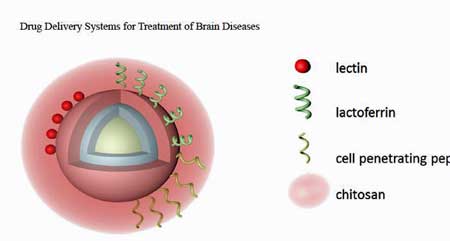 A variety of drug delivery systems are being explored. (From Updated Progress of Nanocarrier-Based
Intranasal Drug Delivery Systems for
Treatment
of Brain Diseases – Fan, 2018)

The attempts go far beyond aerosolizing a substance in a nebulizer and giving the nose a good squirt.  Parkinson’s, Alzheimer’s and other researchers are embedding nanoparticles of drugs in a substance called chitosan (a biodegradable, biocompatible polymer) which can adhere to mucous membranes in the nose and release much more of the drug much deeper into the brain than aerosolized preparations do. Plus, they have a longer half-life and are less prone to bacterial contamination.

Almost all of the above cited studies have appeared in the past five years, with the majority published in the last two. Intranasal drug delivery is clearly a hot topic in brain research.

Still, significant hurdles remain. While a few human trials have occurred, most studies involve laboratory animals. Time will tell how this all works out but future opportunities for other central nervous system diseases including chronic fatigue syndrome (ME/CFS) and fibromyalgia (FM) seem clear.

With Travis Craddock and Nancy Klimas uncovering evidence of a possible genetic vulnerability in the mucous membranes of the nose which could potentially explain much in ME/CFS, the nose is becoming an ever more interesting place (blog coming up.)

If you’ve tried intranasal preparations of glutathione, insulin or another substance, please let us know how it went.